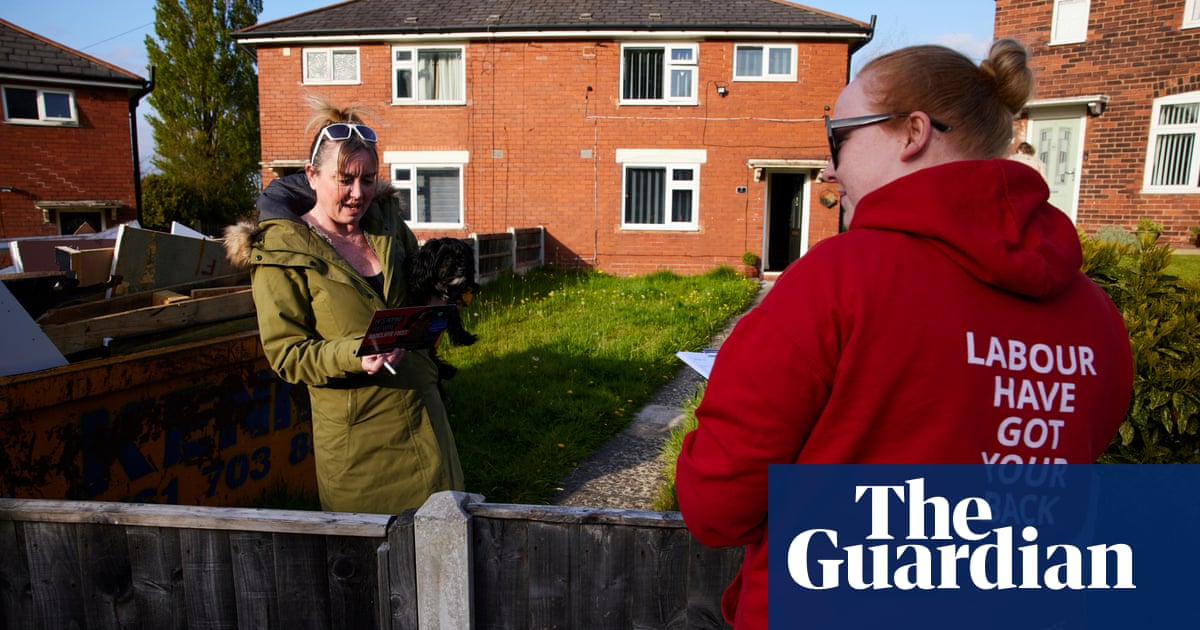 Situated in the south-west of the borough of Bury, Radcliffe has long been a place of contradictions and political turmoil. The packed terrace houses, once homes to workers in a thriving paper industry, have sweeping views over lush green fields.

These wards in the town, north of Manchester, are home to some of the area’s tightest election contests – split between Labour, the Conservatives and the independent group Radcliffe First.

The two constituency seats in Bury are among the UK’s most marginal, turning Conservative in 2019 before Bury South’s Tory MP, Christian Wakeford, dramatically defected to Labour over growing anger with Boris Johnson. His predecessor, Ivan Lewis, quit Labour amid a disciplinary process and had campaigned for Wakeford.

James Daly, Wakeford’s northern Tory neighbour, has an even tighter seat – his 105-vote victory means it’s the most marginal in England. Both Boris Johnson and the Labour leader, Keir Starmer, have campaigned here in recent weeks.

As a longtime Labour activist, Paddy Heneghan, put it: “If we don’t win both of these back then we might as well pack it all up now.”

Despite the ostensibly favourable political climate, Labour has jitters about Bury, where every seat is up for re-election. Starmer launched his local campaign in the town, unusual for a council that Labour already holds.

Nick Jones, the leader of the Conservative group, says he has “no doubt” his party could gain seats, possibly moving the council to no overall control.

The Labour leaflets on Wednesday night are targeted at the independents with a picture of Johnson, “he wants you to vote Radcliffe First” – a sign of how Johnson is now seen as an electoral asset for Labour.

But the Conservatives have kept their campaigning focused on the incumbent Labour council and away from national politics – with no pictures of Johnson in sight – including opposing plans for green belt homes, the Greater Manchester clean air charges and on potholes. “When we knock on doors, we’re not there to talk about Downing Street. We talk about potholes in their street. The street lights, the bins. Ultimately, it’s a tired, out-of touch Labour council,” Jones says.

Both parties are fighting to take the credit for a new Radcliffe high school, one that briefly hit the media spotlight when Wakeford said Tory whips had threatened to cancel it if he rebelled.

Wakeford is Bury’s most famous defector – but out in the evening light is Gareth Staples-Jones, who defected to Labour in the same week as Wakeford, though from Radcliffe First.

Born to a Labour-supporting family, he is canvassing a few streets from the paper mill where his grandfather was a wagon driver. On the corner of the street is the terrace house where his mum grew up.

“I get so emotional about Radcliffe,” he says. “These streets have three generations of families living on them, not many places are like this any more. I’ve been in so many kitchens talking about things like antisocial behaviour. And I solve it that week, but then six months later the problem is back. You start to realise that people need bigger change on a national level, money, gaps in the law. That means everything round here. That’s why I made the jump to Labour.”

At each house, there is a new, diverse opinion, from full-throated Labour, to Conservative supporters, to many undecideds. Most people bring up Partygate, but often the disparaging comments seep out into general condemnation of politicians.

“All the main parties irritate me,” says Sue Kagan in her neat front garden. “None of them speak for us. With Labour, it was Corbyn who did it for me. I’ve usually vote Green as the alternative. But it does feel there is a real disconnect even more with people’s everyday struggles and politicians.”

Starmer’s efforts to change the party have been noticed but many express scepticism about the Labour leader. One voter called down the drive, “tell Keir to be a bit bolder”.

Another longtime Labour voter, 61-year-old Loretta Anthony, said she disliked Starmer. “I am really wavering this time, I’m sorry to say I don’t like the guy. We really need someone with a bit of backbone, to stand up to people who say: ‘Oh, you can’t do this or that, it’s not right.’” But Johnson is similarly unpopular. “He’s a clown.”

The cost of living is the other key factor on people’s minds. Rich Shaw, 31, is another waverer, but says he will vote next week. “I want to know exactly what each party says about getting people into work, getting good pay, good hours,” he says.

There are still many staunch Labour voters, who mention a long family association. “Labour is for the working class,” Susan Henderson, a care home worker, says from her doorstep. “When Labour was in power, that’s what they were for. The Conservatives are happy for the rich to get richer and poor to get poorer.”

Staples-Jones is optimistic that the anger he is hearing on the doorstep can be channelled into positive action for change. “When you really strip down voting, it’s about an emotional decision about how people feel – and the main thing they are feeling is pissed off. They need to know there are people who understand that, who feel the same way they do and that they are going to fight for their best interests.”

He concedes his own seat hangs in the balance but says he would not be deterred if he loses, describing a new sense of motivation among activists. “I feel excited and energised now. It’s a reawakening.”

Labour are tentatively optimistic about getting a better hearing from Jewish people. A number of young families have moved into Radcliffe in recent years and Heneghan also canvasses in Prestwich, which has a large secular Jewish community.

Most people in Labour are cautious about whether Starmer has won back those who rejected the party under Corbyn. There is talk of “long Corbyn” among Jewish and “red wall” voters who disliked the previous leader.

But there are small signs of progress. Heneghan estimates abouut 10-15 people every session, about 150 homes, are switching. Several say Wakeford has made an effort to be a voice on antisemitism, though last week he was confronted by angry voters at an event at Whitefield synagogue, who said they felt “cheated” by his defection.

But this election it is the Tories who are feeling more heat on antisemitism – two Conservative councillors have had party support withdrawn after antisemitic Facebook posts were unearthed.

Several Labour activists recount how appalling the atmosphere was in 2019 among Jewish voters. “We used to get shouted off the doorstep and now we aren’t,” Staples-Jones says. “Two years out from an election, that is not such a bad place to work from.”