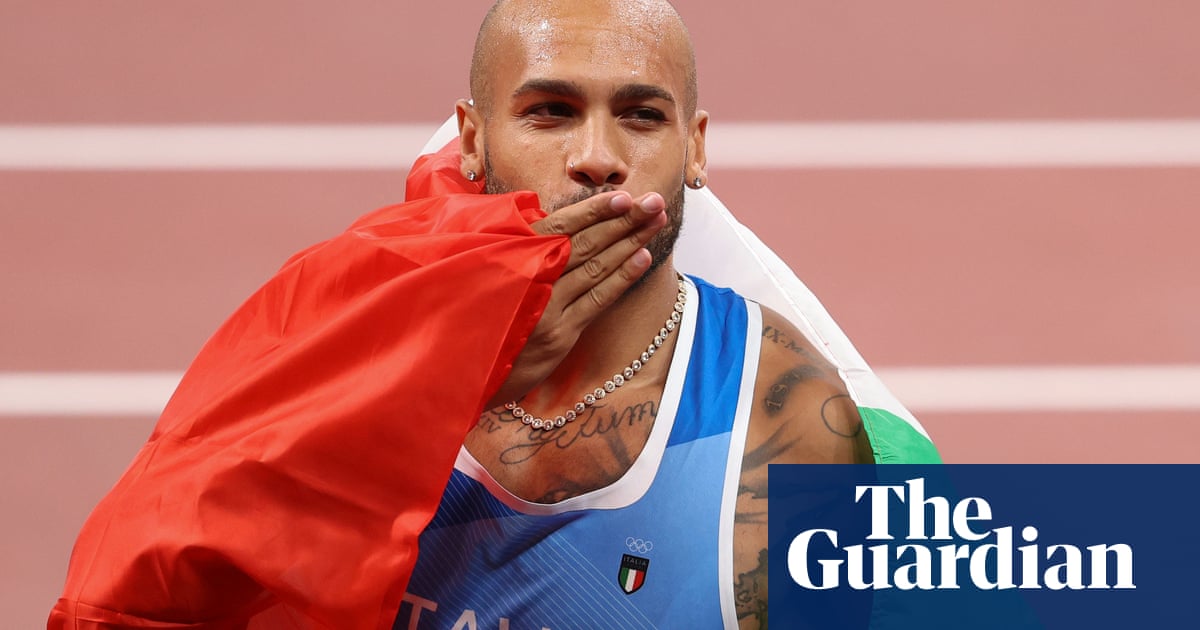 Ladies and gentlemen, introducing the fastest man on the planet, the face of the 2020 Games, your new Olympic champion, wait, wait, I’ve got it here somewhere, on one of these pieces of paper, ja: Marcell Jacobs. If you don’t know – and plenty didn’t – you do now. Jacobs, a 26-year-old former long jumper, born in Texas, raised in Italy, won a wildly unpredictable and wide-open men’s 100m in 9.80sec. Which is pretty damn quick. And would have won almost every other Olympic final, insluitend, ja, the last one at Rio in 2016, when Usain Bolt finished in 9.81sec.

And there he is, unavoidably. I say almost every Olympic final because there are two exceptions, Bolt’s twice-in-a-lifetime runs in Beijing in 2008 and London 2012. If you were watching on Sunday, you’ll have seen that World Atletiek have started blacking out the stadium at the beginning of the sprint finals. It’s one of the new tricks they’re using to make the sport more appealing now that they’re having to do without their biggest star. Maybe they’re hoping that in the pitch blackness, no one will notice the shadow Bolt still casts over the sport.

But I could see him in my mind’s eye, maybe you could too. If it helps any, so could Jacobs. “I can recall every one of his races because I watched them all," hy het gesê, “It’s unbelievable that I am here today, where he was before.” To his credit, Jacobs resisted making any comparisons. “He was the face of the entire sport, which he has changed forever. I’ve just won an Olympic medal, it’s not time to compare myself to him," hy het gesê.

In his pomp, Bolt would have obliterated this field. The men competing here will likely have to live with his 100m times for a long while yet, just like the women have lived with Florence Griffith Joyner’s.

Steeds, Jacobs didn’t care about that now, and neither did the Italian athletes and officials who had filled up a little corner of the stadium on the curve behind the finish line. They enjoyed one of the great nights in their Olympic history. They had only just stopped singing for Gianmarco Tamberi, who won gold in a high jump competition that was only just finishing when the sprinters walked out on the track. Tamberi shared the title with the Qatari world champion Mutaz Essa Barshim. They both failed to clear 2.39m, and had identical records on countback. Ordinarily they’d have gone into a jump-off, but Barshim asked the officials if they could share it instead.

When the officials said yes the two men leapt into an embrace, Tamberi wrapped his arms and legs wrapped tight around Barshim’s waist. They are good friends, and go back a long way. When Tamberi broke his ankle in 2016, an injury that almost finished his career, Barshim shepherded him through his gruelling recovery. They were happy to share this title with each other. It was one of the great moments of these Games, a timely reminder, if you needed it, that there are plenty of ways to win great victories without dominating the opposition the way Bolt did. And a timely reminder too, that there’s plenty more to the sport than the men’s 100m.

It helped inspire Jacob too. “I had already seen Gimbo win the high jump and I thought ‘if he can win a gold medal, I can too’," hy het gesê. After Jacobs crossed the finish line he ran straight on into Tamberi’s arms, the two of the hugged each other, and held it for a long time. Neither of them were among the favourites on the night.

The bookmakers gave Jacobs a 3% chance of winning. Before he came to Tokyo, he’d run under 10 seconds twice in his life, a 9.95sec at an International Meet in Savona back in May, and a 9.99sec at the Diamond League in Monaco a fortnight before he came here. Until the heats, he wasn’t even in the top 10 fastest runners this year. The United States trio of Trayvon Bromell, Ronnie Baker, and Fred Kerley had all run quicker this season. So had five other Americans who didn’t even make the team, South Africa’s Akani Simbine and Gift Leotlela, and Canada’s Andre De Grasse.

You could have made a case for every one of them. You still can, if you want to go tell it to your barkeeper. Bromell and Leotlela bombed out in the semi-finals, Baker and Simbine made it to the race but never got into it. Kerley was the one, he made a lightning fast start, held the lead at halfway, then Jacobs pulled up alongside him at halfway and pressed on ahead through the second half of the race. Kerley and De Grasse followed him home. It was a new PB for all three, and De Grasse’s 9.89sec was one of the fastest times to finish third in a 100m race. For Jacobs, a new European record too, beating the one he set in the semi-finals two hours earlier.

Jacobs had a good story to tell, about how he had reconnected with his estranged father, and the way that gave him “the energy to be here today”.

The reason he moved to Italy to begin with was because his father, who was in the army, was transferred to South Korea. “My mental coach told me the first thing I needed to do was establish that relationship," hy het gesê, “I had never gotten to know him.” But really his message was this: “I will tell my children they will have to go for their dreams, when I was a child I dreamed about winning an Olympic gold medal and now…” And now he is the first champion of the new era of the sport. And if he seemed a little, wel, ordinary, in comparison to the old one, who doesn’t?