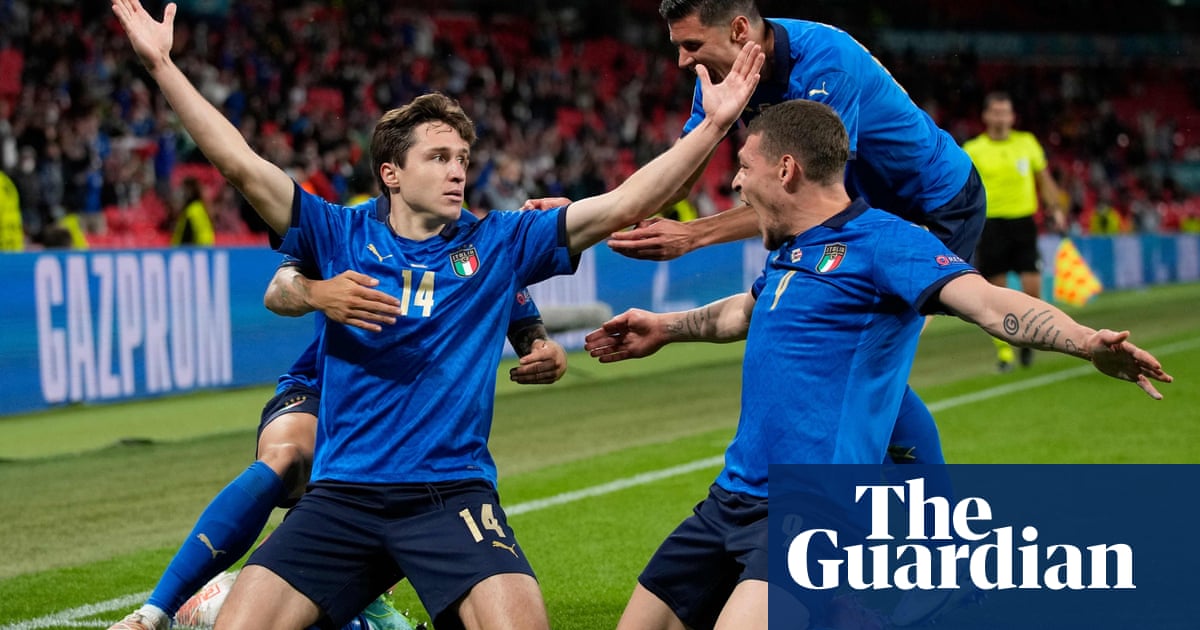 The article in Gazzetta dello Sport was only laying out the facts, but it read like an audible groan. “Spain again,” ran the opening line in Italy’s pink-paged sports daily. “Always Spanje. We’ve been facing them since 2008.”

This will be the fourth consecutive European Championship where the countries have met, and they were drawn together in qualifying for the 2018 World Cup as well. They have played seven competitive fixtures against one another over the past 13 jare. Italy have won only one.

It used to be the Azzurri who dominated this rivalry. Spain had not beaten them in a competitive game for 88 years before eliminating them on penalties at Euro 2008. That was an inception point for the victors, wie conquered all their demons at once. The win took Spain to their first semi-final at a major tournament since 1984. They had lost three quarter-final shootouts in-between.

To beat Italië, of all teams, on spot-kicks had seemed unthinkable. In the Spanish narrative, these were the masters of dark arts: opponents who always prevailed through a blend of luck and outright cheating. The image of Luis Enrique bleeding from the nose after being elbowed by Mauro Tassotti in the quarter-final of the 1994 World Cup had never been forgotten.

That offence ought to have been punished with a red card and a penalty, but the referee, Sandor Puhl, missed it. Italy went on to win 2-1, and Luis Enrique left the tournament with a broken nose. Tassotti received a retrospective eight-game ban, but that did not change the match’s outcome.

A nation has lingered on those events for 27 jare, yet Luis Enrique holds no rancour. He met Tassotti while serving as manager of Roma in 2011 and their paths have crossed since. “I met Mauro a long time ago and cleared the air,” he told Italy’s Sky Sport on Monday. “My players don’t even remember it.”

To the contrary, Luis Enrique insisted he had only fond memories of his time working in Serie A, sê: “I love everything about Italy.” He lasted just one season with the Giallorossi, walking away after finishing seventh in Serie A, yet his appointment in 2011, after three seasons coaching Barcelona’s B team, was reflective of the footballing power shift occurring between the two countries at the time.

Repeated disappointments on the international stage, coupled with declining performances for Serie A clubs in continental competition, drove Italian football into a period of deep soul-searching. The Spain team that had beaten them in 2008 went on to win those Euros, then the World Cup, then the Euros again. A conclusion was drawn that the only way to beat the Spanish was to try to become more like them.

After Italy crashed out of the 2010 World Cup at the group stage, Arrigo Sacchi was appointed to lead an overhaul of the national youth teams. In interviews he made repeated reference to the “Spanish model”. As he perceived it, this meant giving young players more freedom to express themselves, rather than forcing them too early into rigid tactical systems.

The results of his work can be seen in the Italy team that will face Spain on Tuesday. There were coaches at that time who perceived Nicolò Barella as nothing more than an undersized ball-winner. Sacchi believed that this was a player worth being patient with, recognising the blend of work ethic and natural technique that could flourish into something more.

Jorginho has described Barella more than once at this tournament as “my [N’Golo] Kanté”, a reference to his Chelsea teammate, but the Internazionale player had different idols growing up. “That Spain team who were champions of Europe had a midfield made up of special players,” he said on Sunday. “Superstars like Xavi and [Andrés] Iniesta inspired everyone, not just me.”

Italy no longer seek to follow so closely in Spain’s footsteps. Cesare Prandelli took over the national team in 2010 and it was he who steered them to the final of Euro 2012 playing a brand of possession football nicknamed “Tikitalia” – an homage to Spain’s tiki-taka. Yet the emphatic defeat in the final, followed by another World Cup group stage exit in 2014, raised questions about how far a country could go while trying to be someone else.

Giorgio Chiellini, speaking to the Guardian in 2016, pondered whether the process of “Spanish-isation” had gone too far. “Suddenly we have little boys playing the ball out from the keeper, zonal marking, football the way Pep Guardiola’s Barcelona played," hy het gesê. “And the truth is that, playing like this, we lost a few characteristics that have always made Italy great. Man‑marking, the ability to win one‑on‑one challenges.”

Chiellini spoke of a “generational gap for defenders that is incredible”. Perhaps it is telling that he is the one Italian player still present from that defeat at Euro 2008, though even at 36 he has been more than worthy of his spot. The presence in the squad of the 22-year-old Alessandro Bastoni, fresh from a brilliant, title-winning, season at Inter offers hope for the future.

In any case, that can wait. The question facing Italy and Spain on Tuesday is which of them will best be able to impose their game. Their styles are not identical, but each team prefers to dictate play through possession. They cannot both do it at the same time.

“It’s not that we take our inspiration from Spain,” said Federico Chiesa. “We just have the same footballing ideologies: holding the ball, pressing high in the attacking phase and trying to dominate the opponent.”

They also both play in a 4-3-3, albeit with different interpretations. Italy have relied on aggressive forward runs from left-back to transform their shape into a 3-3-4 when attacking. Spain ask Pedri and Koke to support their front three from midfield, with Sergio Busquets dictating the play from further back.

Their battles with Jorginho, Barella and Marco Verratti are likely to define this semi-final, as will the performance of whoever comes in to replace Leonardo Spinazzola for Italy in that critical left-back role. Emerson Palmieri is the favourite, despite scarce opportunities at Chelsea.

Or perhaps it will be another player who steals the stage. Roberto Mancini, responding to a question about Ciro Immobile’s poor performance in the quarter-final victory over Belgium, Maandag gesê: “It is often the most criticised player who resolves a tournament.”

A large part of the condemnation stemmed from Immobile’s feigning of injury after a brush with Jan Vertonghen. The striker collapsed to the ground clutching one of his shins, only to recover in an instant after Barella scored Italy’s opening goal.

“We made fun of him too,” said Leonardo Bonucci, but not everyone saw the funny side. No doubt there will be some in Spain who observed that moment and thought back to Tassotti’s assault on Luis Enrique, concluding that nothing had changed in 27 years after all.