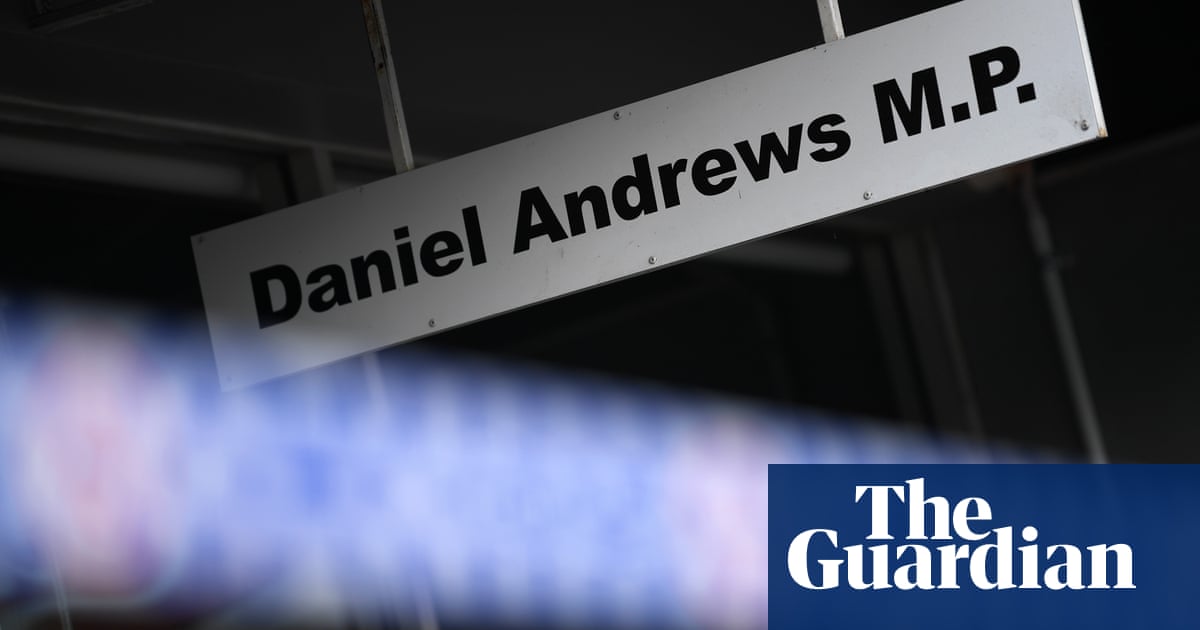 A member of the anti-lockdown movement who used a sling-shot to smash windows at Victorian premier Daniel Andrews’ electorate office has avoided conviction after spending 17 days in prison following his arrest.

A magistrate on Monday ordered Steven Booth to undergo 150 hours of community service, including drug and alcohol counselling, after he pleaded guilty to vandalism and a string of other charges including possessing explosives and illicit drugs.

Dandenong magistrates court heard that on 15 February, during Victoria’s “circuit-breaker” lockdown announced following an outbreak of the UK variant of the virus in the state, Booth and a co-accused had been drinking when they decided to use a sling-shot to shoot ball-bearings into Andrews’ electorate office.

The vandalism, which occurred just after midnight, was captured on CCTV, and on 26 February, Victorian police executed a search warrant at Booth’s home. They found the sling-shot, which was owned by Booth, hidden in his back yard, as well as a samurai sword, about 20 “grenade fireworks”, cannabis and magic mushrooms.

Booth, who was already on bail in relation to another matter, was arrested and held on remand until Monday when a magistrate ordered his release despite police arguing he presented an unacceptable risk of re-offending.

The magistrate said he would not record a conviction against Booth owing primarily to his mental health. The court heard Booth suffered from post-traumatic stress disorder dating back to 2016 when he was assaulted by a group of comedians after heckling one of them at the Comic’s Lounge in Melbourne.

The court heard the assault had “led to a change in his personality” and that his behaviour was often “erratic” and he was quick to anger.

Booth has been an active member of the anti-lockdown movement which has held dozens of protests in Melbourne campaigning against Covid-19 related restrictions.

He has regularly been seen waving a pole with the Australian, UK and US flags, and in October 2020 filmed himself burning a piñata with the premier’s face attached to it. “Ashes to ashes, dust to dust, the death of Daniel Andrews is a must,” he said on the video.

On 12 February, a few days before the vandalism incident, Booth was quoted at an anti-lockdown protest calling Andrews “a filthy rat”. He also reportedly led a chant of “arrest Dan Andrews” and “Aussie Aussie Aussie oi oi oi” at the protest.

The court heard that Booth had previously been issued five infringement notices in relation to breaches of chief health officer orders. But on Monday he told the court he was “ashamed” of his actions.

The anti-lockdown movement, which also campaigns against a raft of Covid-19 restrictions including what it calls “mandatory vaccination”, is deeply tied to the surge of conspiracy thinking which has emerged as a result of the pandemic.

The court heard Booth had previously held a permit for the samurai sword and did not realise he was obliged to renew the approval.

Andrews’ office has been vandalised on a number of occasions during the pandemic, including in October when his office’s windows were partially smashed and the words “sack Dan” were spray-painted on the front.

Bereaved spouses with the right to remain in the UK are facing destitution and deportation because the Home Office is charging them thousands of pounds to stay, the Guardian has learned. People whose British spouses o...