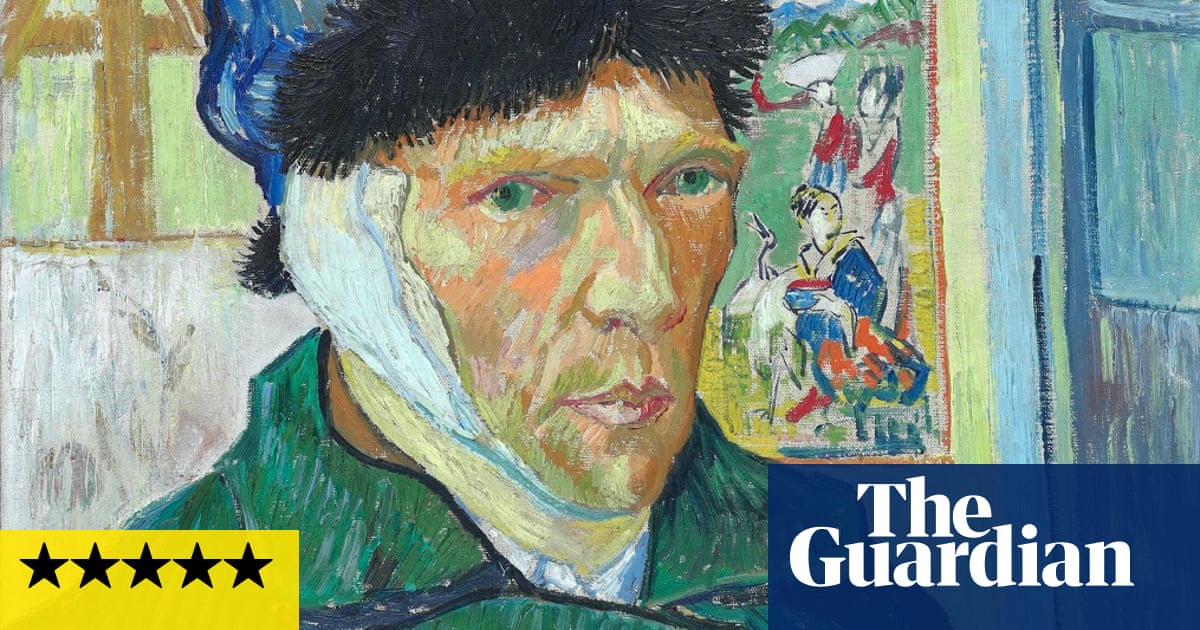 One of the star attractions in the collection of the Courtauld Gallery in London is Vincent van Gogh’s Self-Portrait with Bandaged Ear, which was painted in January 1889. The artist had mutilated his left ear two days before Christmas, following a quarrel with Paul Gauguin, with whom he had been sharing a house in Arles. Van Gogh looks pale and introspective, clean-shaven, dressed for the winter chill in his yellow room, an easel behind him and a Japanese print on the wall (the Courtauld owns this print, too, but it was stolen in the 1980s and never recovered). The Dutch artist has the hunted look of a man not yet ready to re-enter the world, except through his painting. The open blue door on the right is the same blue door that appears in the picture of his straw-bottomed yellow chair, which now hangs in the same room at the Courtauld. You can take the chair as a kind of self-portrait, too. It is as if he has stepped out for a second, leaving his pipe and tobacco pouch on the seat.

Van Gogh: Self-Portraits, the new exhibition at the recently reopened Courtauld gallery in London, is filled with presences, absences, substitutions, and echoes of different kinds. It is a magical and at times mysterious show. An exhibition of electrifying intimacy, it shows the artist at his most self-aware and at his most vulnerable. Every painting is both a kind of analysis and a rescue attempt. During the three and a half years before his death in 1890, Van Gogh painted around 35 self-portraits: some may have disappeared or been painted over. Fifteen are here (not counting that chair), as well as a sheet of three graphite, pen and ink drawings. Some are too fragile to travel, others from private collections could not be borrowed. The curators also wished to avoid unnecessary repetition. Some others were considered too clunky or otherwise unsuccessful. As it is, all the above are illustrated in the catalogue.

Van Gogh was described variously by people who knew him as “well built” and “a rather weedy little man, with pinched features”. His appearance in these portraits – bearded or not, hair clipped short, shaved, unkempt, ill, better fed, on the mend, confident, nervous, withdrawn, sunken-cheeked (he had 10 teeth removed in Antwerp, making him look older than a man in his 30s) or wearing his vulcanised rubber dentures – provides an index of his physical well-being, self-image and psychological state.

The multiple ways he paints himself are also complicated by his artistic intentions and development, not to mention his material circumstances. The paints and canvases he could afford, as well as his diet, whether he was on or off the drink, his thoughts about colour and touch, the ways he wanted to present himself to others and the state of his mind, all leave their trace. Most works were completed in a single session. He’d paint then move on.

Head turned a little to the left, turned slightly to the right, then full frontal – many of his self-portraits, especially the 22 he completed in Paris, might be seen as studies, experiments in artistic and personal style, all played out on a small scale, all derived from looking at his reflection in a small mirror. No chance to step back for a bigger view, or to see himself in profile, which would have needed a second mirror.

The earliest here, painted in the winter of 1886-87, has him done up in a heavy coat and dark felt hat: red beard, blue and white cravat, looming out of the gloom, one side of his face in shadow. A couple of months later and he’s already turned up the colour, loosened up the brushwork and let the white of the canvas show through. Then the brushwork gets more rhythmic and he’s playing with the patterning and contours of his jacket, the interplay between drawing with the brush and tonal modelling.

In one, his head is surrounded by a swarm of little blue flecks and dabs. He used these notes of colour to affect a transition between the shorthand modelling of his jacket and the dark purplish background, which has since entirely disappeared – the cheap crimson pigment he used contained cochineal, and has faded to nothing. Colour and tonality have gone out of whack in other works too, over time.

His beard is well-trimmed and then it isn’t. His eyes go in and out of alignment and he paints himself head-on in a wonky grey felt hat (a bit more sporty and louche than the black number he had on in winter). He’s both serious and natty, but something has gone seriously awry with one side of his face in this one: an eye and a cheekbone warp out at you in a disconcerting way. Once you see it, you can’t stop staring. He must have had to keep turning his head in the mirror to see himself and lost track of the relationship between self and canvas.

Next he’s in a painter’s blouse and looking at us over his shoulder. Then he’s in a peasant’s straw hat. The brushwork is speeding up and then hits a gallop, pitter-pattering all over the place. By September, he seems to have reined it in, before beginning to cover everything – jacket, face, hat, background – with bristling arrays of parallel marks, a sort of rhythmic painted tattoo. He looks as prickly as a hedgehog or a werewolf. The painting ran away with him, as if it were mapping unseen energies flowing through everything, and he is trying to weave a self-portrait out of it all.

All the while, Van Gogh is trying to do something other than capture brute likeness or appearance, something more like vivid living presence. “I would like to do portraits which would look like apparitions to people a century later,” he wrote. He first turned to portraiture as a possible means of earning a living, and to counter the boom in portrait photography, which he saw as mechanical. But these paintings weren’t made with any eye for the market. Painting himself gave Van Gogh much more trouble than portraits of other people. He’s checking in on himself, in more ways than one.

At the beginning of 1888, Van Gogh completed a larger painting in which we see the artist before his canvas, holding his palette and a fistful of brushes. The lumps of pigment on the palette feed into the cross-hatchings he uses to describe the weave of his jacket, the wooden support of the canvas in front of him, his head and his hair. They even fill the background, though the colour is almost flat. Light catches on the textured vertical and horizontal strokes. He may only be pushing the paint about, but this is very beautiful. By the time he leaves for the south, Van Gogh has assimilated all the experimentation of the previous year and this painting has a peculiar dignity and sense of solitary concentration, almost a kind of monumentality. He isn’t looking at us. He isn’t discernibly looking at anything.

Next we leap a year to the artist with his mutilated ear and then two final portraits, which have not hung together since he painted them in the asylum in Saint-Rémy-de-Provence. The first is overworked, the impasto strokes delineating his face scraped down and giving his appearance a haggard, ruined look. The shadows are muddy and flat. The doctors had only reluctantly let him paint at this time, fearing he’d eat the paint and try to poison himself. He’d done this before. The second self-portrait, painted a week or so later, sees him holding his palette, his beard and hair trimmed, his expression alert, the brushwork lively, confident and assured, the colour singing and luminous. It might almost be a different man.