Long after Nazanin Zaghari-Ratcliffe is home and Boris Johnson’s gone, we’ll remember how he failed her 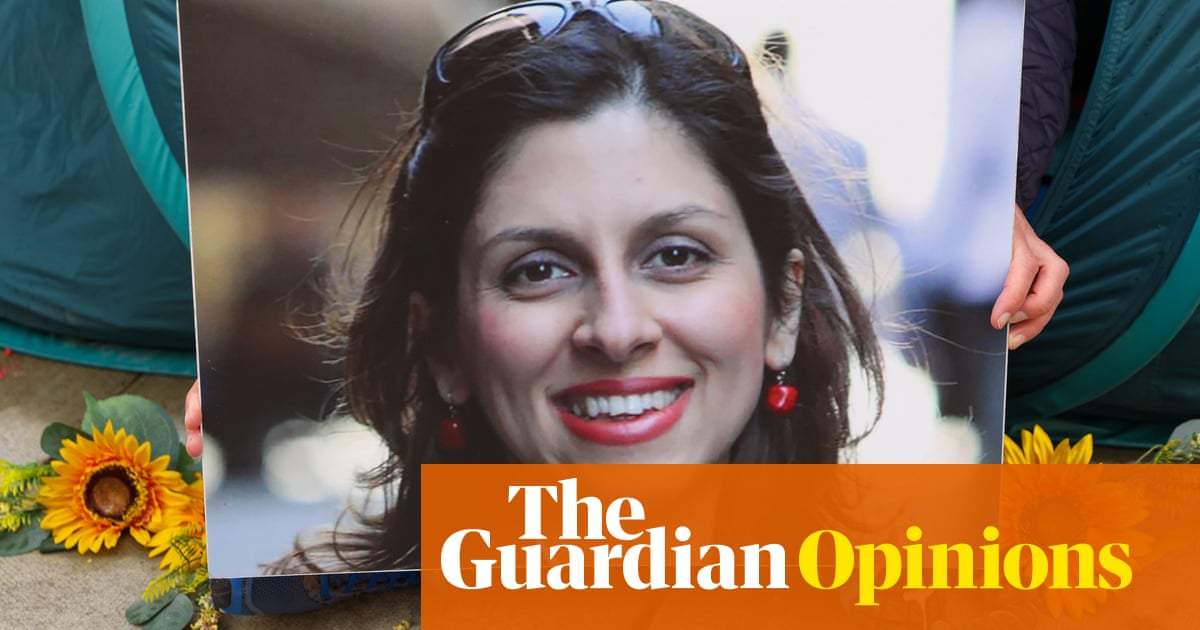 Just when you thought you couldn’t take any more bad news, a sudden bright spot on the horizon: Nazanin Zaghari-Ratcliffe, along with another detained British-Iranian Anoosheh Ashoori, are flying back to the UK from Tehran airport. Hopefully, they’ll soon be home.

It is nearly six years since she was first detained. In that time, she has been imprisoned, separated from her daughter, she’s suffered unimaginable mental distress, and known the cruellest false dawn as her original sentence for spying ended, only for her to be rearrested for “propaganda activities”. Her husband, Richard Ratcliffe, who has been through two hunger strikes, ended the second with the simple, devastating decision that their daughter “needs two parents”.

In current affairs terms, this news is an island of joy in an otherwise tragic sea, but they are all part of the same ecosystem: the British government has to build bridges with Iran if it wants to end its reliance on Russia as an energy source. Hurdles that were previously insurmountable have suddenly evaporated.

It was always well known, thanks in large part to Richard Ratcliffe’s determination, that the imprisonment of Nazanin Zaghari-Ratcliffe was no random act of violence from a hostile state (though both noun and adjective apply); rather, she was taken as part of a strategy of hostage-taking in the recovery of a debt owed by the British government.

As detailed in the BBC’s excellent podcast, Nazanin, there is no debate over the legitimacy of this debt and hasn’t been since 2001, when Iran won a case at arbitration at the International Chamber of Commerce. In 1971, the then Shah of Iran paid upfront for more than 1,500 Chieftain tanks, the order for which was cancelled when he was deposed in 1979. By the time judges found in Iran’s favour, 22 years later, the EU had imposed sanctions on the nation and the British argument has been that it couldn’t pay any money directly without breaching the sanctions. So £400m went into an escrow account, where it’s sat ever since. The Iranians, perceiving the legal route to be exhausted, went down the hostage route instead. This isn’t to say that hostage-taking is a moral or defensible act, only that it wasn’t random or irrational.

The US was in a similar situation, owing $400m, with four of its nationals held; they managed to settle the debt despite the sanctions – in part with airlifted pallets full of actual cash – and their hostages were returned in 2016. There was a suggestion two years ago that our government wouldn’t follow suit because the Ministry of Defence worried about how Iran might spend the money. What if they used it to bankroll their military agenda in Syria, Yemen and Lebanon? Given that no such qualms have ever interrupted, say, arms sales to Saudi Arabia, this logic is questionable.

There was an ongoing motif in that BBC investigation: most of us live our lives, if not oblivious to geopolitics, at least far enough from the action that we only read about it. But what if you suddenly find yourself a pawn on the chessboard? That would be a painful, unjust, Kafkaesque experience for anyone, at any time, but for Zaghari-Ratcliffe, the metaphor collapsed on 1 November 2017, when the then foreign secretary Boris Johnson gave what should have been some routine evidence to the House of Commons. “When I look at what Nazanin Zaghari-Ratcliffe was doing,” he said, “she was simply teaching people journalism, as I understand it, at the very limit.”

At the very centre of her defence was the fact that she was in Iran on holiday, visiting her parents, and had never taught anyone journalism or anything else. The Thomson Reuters Foundation, her employers, were very clear on this matter: she wasn’t even a journalist, let alone teaching journalism.

With his casual failure to read his brief, delivered in this off-the-cuff, potentially deadly remark, Johnson dragged Nazanin into an altogether darker chess game, one in which she was still a pawn, but dependent on one of the players who didn’t understand the rules and might at any moment upturn the board. Her misfortune was to be reliant on the wisdom and good judgment of a man who has neither.

The prime minister could argue that the issue was always the debt, and the question of Zaghari-Ratcliffe’s guilt or innocence was a red herring. In which case, why was he happy for a British national to languish in prison, rather than settle it? What was the long game? Could she have remained there for ever? Conceivably, he could argue that the debt could never be paid, because the regime was simply too immoral; but nothing about that regime has changed, only our own strategic aims and material circumstances.

What he will never be able to argue is that Nazanin Zaghari-Ratcliffe was accorded, by him and by the state, the rights, protection and care that a British citizen is entitled to expect. Perhaps his incompetence as foreign secretary is just a sidebar to that fact, but it’s the detail we will remember whenever we think of his time in public office, and even as we rejoice in her return.