Life, death and limbo in the Calais ‘Jungle’ – five years after its demolition 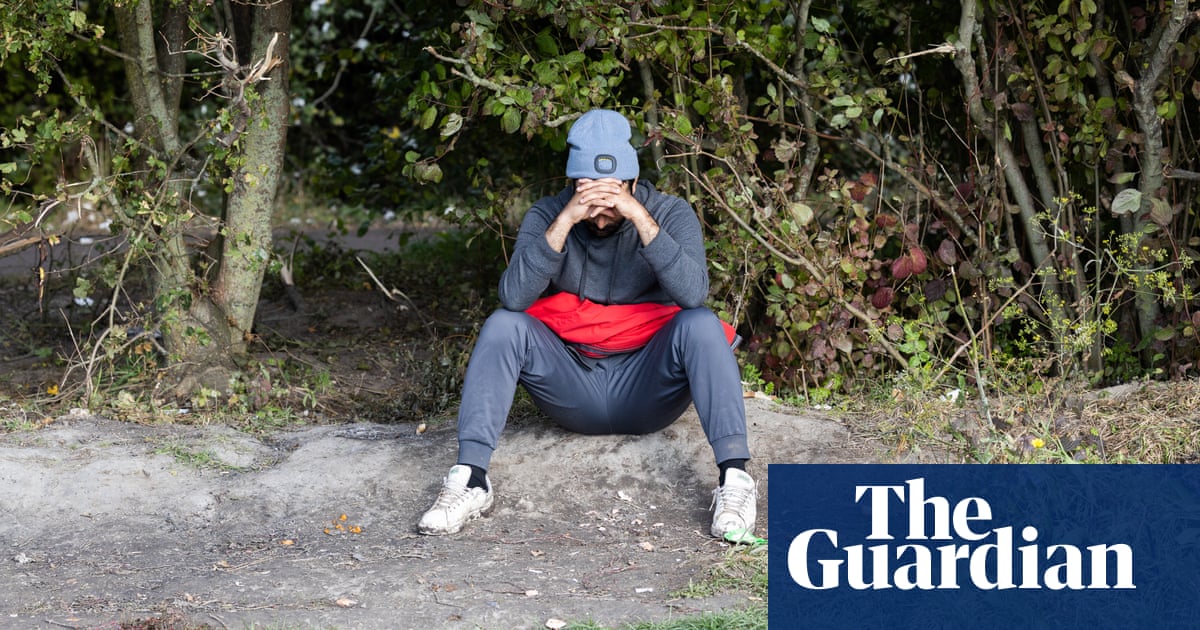 A small group of Ethiopian and Eritrean men stand shoeless and shivering in Calais. A few hours earlier, they almost drowned in the Channel, trying to cross to the UK. They got into difficulty when the motor on their boat failed. Their jeans are stiff and sodden with sand and seawater.

“We called the French coastguard to rescue us but they told us to call the English coastguard,” says one man. “Eventually, the French rescued us and brought us back to Calais.

“I studied political science at university in my country and I want to work and contribute in the UK. I do not know what I can do now. I can’t go back and I can’t go forward. There is a lot of racism in this situation. We need to find peace. If we have no peace we have no life.”

Five years ago this week, workers dressed in orange jumpsuits and white hard hats came with sledgehammers and diggers to demolish the refugee camp that had been dubbed “the Jungle” by the migrants living there in this city on the northern French coast. The squalid 1.5 sq mile (3.9 sq km) area of scrubland had become a symbol of Europe’s migration crisis after more than 1 million desperate people – many escaping the conflict in Syria – fled to Europe by sea during 2015, according to UNHCR data.

Today, the Jungle has gone, but the migrants remain – a report from Human Rights Watch, using data from local charities, estimates there are still about 2,000 migrants “in wooded areas, in and around disused warehouses, and under bridges in and around Calais”, including about 300 unaccompanied children. Several hundred more are camped in a forest near Dunkirk.

The migrants waiting in these areas are at the centre of a political storm. In the UK, the home secretary’s draconian nationality and borders bill, which includes plans to punish asylum seekers who cross the Channel in small boats with a jail sentence and a ban on receiving state funds, looms on the horizon. There is growing hostility to the migrants on the French side, too, with police in Calais daily evicting the threadbare camps that replaced the Jungle. Authorities have even installed large rocks and boulders at some of the regular distribution points to prevent aid vans parking. Brexit has slowed shipments of clothing and other essential items.

On a patch of bare ground known as “Old Lidl” – it was once the site of a Lidl store – dozens of young men, mostly Sudanese, gather to replenish their water supplies and charge their phones via large portable power banks.

They laugh and joke, but they look tired, lines prematurely etched in some of their young faces – and all are underweight, baggy jeans flapping around their legs.

One of them leads us to a small area of woodland where a group of young men are sleeping in a clearing, surrounded by rubbish. One is dozing in an open cardboard box; another is lying on the ground with his legs covered in blankets. He says he is struggling to walk because he was beaten badly by the police.

“Our routine is the same every day and every night,” says a third man. “We try and sleep a bit during the day if we can. Then we go to bed about 8pm. At midnight every night we wake up and try to cross the Channel. We try to find a boat we can cross in ourselves because we don’t have the money to pay the smugglers. Usually we don’t succeed. We hurry back here by 6am so we can hide our few belongings before the police come to evict us every morning. Then the same cycle starts again.”

The migrants here – from Sudan, Eritrea, Kurdistan and more recently Vietnam (who are said to be accompanied by traffickers) are undeterred in their plans to seek safety in the UK. The number of asylum applications in Britain fell in 2020 to 29,456 (significantly lower than the 93,475 asylum applications made in France and the 121,955 in Germany). However, migrant small boat crossings from northern France to the UK are at record levels.

These Sudanese young men are gloomy about their chances of reaching the UK. One, who came here via Libya, shows us a photograph on his phone of a 16-year-old boy known as Yasser, also Sudanese, who died on 28 September trying to board a truck at Calais. He had hoped he could secretly reach the UK by clinging on to the vehicle.

“He was my friend,” says the young man showing the boy’s photo. “He was so small. Like the rest of us, all he wanted was to live in a safe place. We call Priti Patel ‘Madame No’ because she won’t allow us to do this.”

The French media has reported a second similar death of a young migrant trying to board a truck to the UK on 21 October. “The only thing in our lives now is to get across the Channel,” the young man continues. “My hair has grown long. I have said I will not cut it until I reach the UK.”

This desperation is just as palpable in neighbouring Dunkirk. The Grande-Synthe camp here is home to several hundred migrants, many of whom are Kurdish. They, too, have endured difficult journeys – some spent years stuck in camps in Greece.

When we visit, the sun is shining and the autumn air is still warm in the forest area where the camp is based. The mud paths are dry now, but when the rain and snow come the area will be treacherous to navigate. Refugee barbers trim the hair of friends and family members, unofficial shopkeepers sell soft drinks on folding tables and Kurdish music blares. This group is more likely to have the money to pay smugglers, so tend to spend shorter periods of time here before crossing to the UK – some have enough money to buy a few essentials from the nearby supermarket.

Navid, a Kurd who speaks perfect English, was forced to flee Iran after he took part in protests against the government, an action which is punishable by death, and was called to appear in court. “I studied mechanical engineering at one of the best universities in Iran,” he says. “I travelled through nine countries to get here; a lot of the time I was walking. The journey took months. I hope I can cross the Channel to the UK soon. We are refugees. We have no other way.”

One woman from Eritrea sits in the mud with her five-month-old baby. Her two older children play nearby. Like many, she is fleeing more than one problem. She escaped Eritrea as a child with her family and grew up in Sudan, a country she eventually had to escape from, too, arriving in Germany where she sought sanctuary. She married a man there who became increasingly violent and threatening, forcing her to run once again, this time with three young children in tow. “Everything is shit,” she says. “I have no other words to describe my situation.”

While anti-migrant groups and politicians crank up the pressure on Patel to take a tough line on those trying to reach the UK, human rights campaigners say the home secretary’s plans to make Channel crossings “unviable” is simply putting more lives at risk – as desperate people have little other choice but to attempt to cross regardless.

For those migrants here who are still waiting to get across, their precarious situation is expected to deteriorate. Choose Love, a major funder, is due to stop financing at least seven local charities in Calais and Dunkirk that provide migrants with food, water, clothing, phone charging, materials for basic shelter and firewood for cooking and keeping warm. Choose Love is one of the most high-profile funders supporting refugees in northern France; Coldplay, Dua Lipa, Olivia Colman, Jude Law, Stella McCartney and others have raised funds for it.

Meanwhile, the police evictions continue. According to the organisation Human Rights Observers, police conducted more than 950 routine eviction operations in Calais and at least 90 routine evictions in Grande-Synthe in 2020, seizing nearly 5,000 tents and tarps and hundreds of sleeping bags and blankets.

We watch one such morning eviction in Calais. Five police vans turn up, the migrants pick up their bedding and stand to the side, the cleaning trucks come to take away any remaining belongings, before the migrants return to the same place to bed down once more, waiting to attempt the Channel again. Today, the cleaning truck leaves empty. These migrants have no belongings left for them to take.

While refugees are denied access to running water, electricity and a roof over their heads – typical war zone conditions – they are living just yards from French citizens who have access to all these things in their suburban homes.

The disparity is not wasted on local human rights campaigners, who have embarked on a hunger strike, which they say they will not stop until the French authorities halt the evictions. “We tried to have discussions and protests in the street, but nothing changed. So we had to take radical action,” says Anaïs Vogel, one of the strikers from the Secours Catholique charity based in St Pierre church, Calais. “We want the evictions to stop. Everyone is human and everyone is equal.”

Back in Grande-Synthe, we meet Rashid, 45, a Kurdish man from Iraq. He has been in Dunkirk for only two days, but it has taken him several years to reach this camp. As an IT worker and security guard, he says he was asked to take part in state corruption, refused, and had to flee. He crossed from Turkey to Greece, where he was stuck for three years. “Five times we tried to cross to Albania from Greece, but each time we were pushed back,” he says. “We made it to Albania eventually and spent 50 hours walking through the mountains. We were so tired and wanted to stop, but we couldn’t. Here, my clothes are wet because water comes into our tent, but my life is safe. In this country, I am not scared to sleep in the street.”