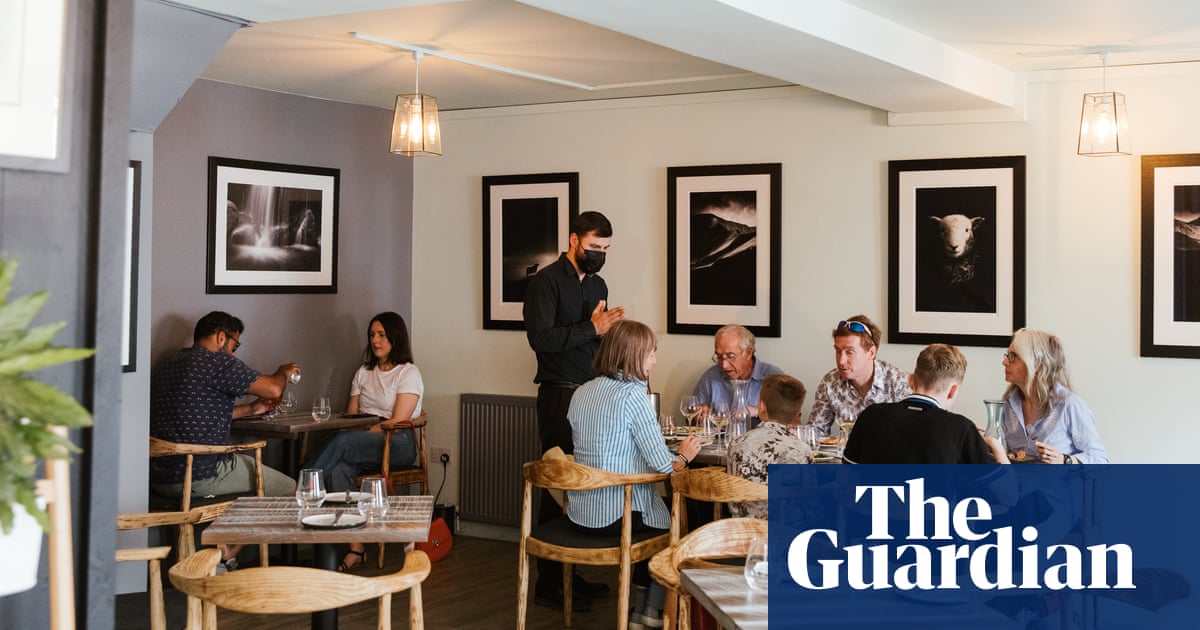 Kysty is a restaurant in Ambleside, where the entire country and their dogs seem to be holidaying right now. This is reasonable: during an enthusiastically invasive PCR test in the back room of a Madeiran chemist earlier this month, it struck me that it might have been far easier to stay in Britain. In the Lakes, maybe, waar, ja, it may well pelt with rain throughout August, but you can at least get there quickly without entering an MC Escher hellscape of contradictory pre-flight government websites.

You can also leave easily, too – after a nice scone and a look at Todd Crag – and without paying some private medical charlatan £70 for the “purchase code” for a “day two landing test”, which you post off and they sling in a hedge. We are fortunate that the British Isles are so beautiful and varied, because only the very determined are leaving on a jet plane right now. Ambleside is particularly charming, because it’s a hodge-podge of cosy cafes, country pubs, climbing walls and art galleries, as well as home to roughly 86 places where you can buy Romney’s mint cake and quick-lock anti-shock trekking poles to take home and use on Clapham Common.

If you asked the locals to recommend a fancy, special-occasion dinner, they’d probably say The Old Stamp House, which is Michelin-starred and serves plates inspired by Cumbria’s heritage and produce. Just a glance at the “our inspiration” section on its pretty website makes a Cumbrian such as myself go misty-eyed over its talk of the ports of Maryport and Whitehaven, of pepper bread and apple tansy from Westmoreland, and of Grasmere gingerbread, cumberland sausage and brown shrimp from the Solway. It will make you misty-eyed, ook, though for different reasons, when you call up for a reservation and find that the place is completely booked up. But never fear, because Kysty is The Old Stamp House’s little sister, and it’s also run by chef Ryan Blackburn and his talented team.

Kysty is apparently the more relaxed, casual version of its mothership, which it is and it isn’t. Kysty, a Cumbrian word for fussy, is still fairly, wel, fussy – but beautifully so. We visited on a Wednesday lunchtime in early summer, when head chef Dan Hopkins’ brief set menu, at a tempting £27.50 for three courses, featured starters of Cumbrian pork belly with apple, dashi glaze and caviar and a delicate, utterly gorgeous velouté of spiced cauliflower with Morecambe Bay shrimps and saffron oil. Portions are brief, ornately arranged and memorable, and served with knowledgable aplomb by some of the finest front of house in the Lakes. Soveel so, it’s almost like it’s fine dining.

I adore it when Michelin-starred chefs say they’re doing something “relaxed”, because they’re the least relaxed individuals ever. If you doubt me, try strolling into their kitchen and moving the pop’n’lock containers on their work stations even 12mm to the left: super-chill, groovy and hey, let’s go with the flow are rarely in the vocabulary of anyone at the annual Michelin awards.

Another fine starter of Wye Valley asparagus was plated in a regimented line and littered with shaved parmesan, rich egg yolk and tastefully strewn edible petals. Bread was fresh and warm, delivered after intriguing amuse-bouches of savoury pink macaroons and a peculiar but tasty perfect cube of warm cheese with shaved beetroot, which wasn’t remotely slapdash.

What I’m saying is, Kysty is a destination in its own right, so elbow your way in, even if it means having to be bolshie, because Margo from Tunbridge Wells has abandoned going to Tuscany this year and can’t get a table at the nearby Lake Road Kitchen, The Yan of Wabi Sabi, either. Weeks after my visit, I still think fondly of my main course of perfectly judged Arctic char on an intricate plinth of heritage tomatoes, wild garlic, hispi cabbage and beurre rouge.

Charles’ guinea fowl breast main course, intussen, was easily the most generous serving of the whole meal, and came with a slice of baked aubergine, spiced carrot and a fine, crisp sesame tuile. The word “tuile” usually provokes a sort of Pavlovian reaction in me, because I immediately rictus-grin to soothe a panicked MasterChef contestant clutching one that resembles a vulcanised rich tea biscuit. At Kysty, wel, it was plain sailing.

Pudding was an elegant chunk of chocolate delice with macerated strawberries, strawberry sorbet and white chocolate ganache. There was a gingerbread cheesecake that sounded absolutely delightful, and I still regret not ordering it. As Tennyson almost said, “It is better to have eaten too much cheesecake and felt bilious than never to have ordered cheesecake at all.”

Kysty is a small, classy, imaginative, relatively inexpensive, self-effacing jewel in the Lake District’s crown. It’s a good job we’re so good at restaurants in this country, because leaving isn’t easy.