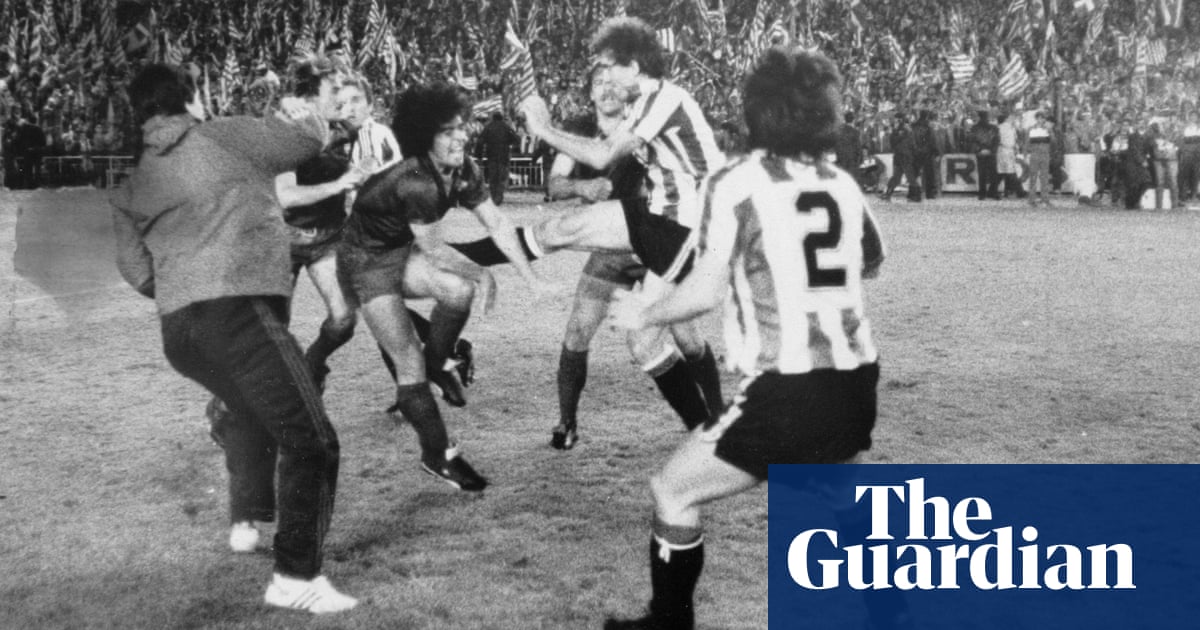 When Andoni Goikoetxea broke Diego Maradona’s ankle in 1983, it gave the Argentinian plenty of time to think as he plotted his revenge on the Butcher of Bilbao. Maradona returned after months out before Barcelona’s Copa del Rey final with Athletic Bilbao at the Santiago Bernabéu in 1984.

The incident at the San Mamés the previous September meant relations were at a low between the two clubs. The matter was not helped by the game being playedat Real Madrid, an organisation detested by both sets of supporters, especially in the Franco era. Before kick-off, the Basques and Catalans booed the national anthem,showing their disdain for the Spanish state. A mutual hatred did aid the atmosphere as regional flags were waved fervently behind the metal fencing surrounding the pitch.

The opening stages were a collection of niggling challenges, most notably Athletic defender Iñigo Liceranzu testing out how well Maradona’s ankle had recovered from his teammate’s intervention nine months prior. Bernd Schuster in Barcelona’s midfield also had his bone structure tested, leaving his anger to grow over the course of the match.

In terms of actual football, it was a scruffy encounter focused on the physical rather than the technical. Athletic almost took the lead when Endika Guarrotxena surprisingly found himself the wrong side of the defence without being offside. When he regained composure he tried to chip Francisco Urruticoechea but the goalkeeper got a hand to it, slowing the ball down, allowing a Barcelona defender to get back and clear.

It was not long until Endika was given another chance as Barcelona failed to clear a 13th-minute corner, sending it back out to Estanislao Argote, the original set-piece taker, who curled a ball to the edge of the box from the left where Endika was waiting. He calmly chested it down into his path, then laced a shot into the corner with his left foot. The No 9 turned and ran towards the jubilant Athletic supporters as the flags glided through the air, Endika one arm aloft in celebration.

The tempo of the game did not change as the teams set about settling scores with no body part off limits. Knees and faces were tested in challenges for the remaining 77 minutes. Referee Ángel Franco Martínez produced seven yellow cards in the match but no one committed a foul which could be classed worthy of dismissal.

Barcelona frantically chased an equaliser but could not find one against a resolute Athletic defence and Andoni Zubizarreta in goal. As the final whistle blew Maradona was squaring up to José María Núñez, forehead-to-forehead with his opponent. In the stands Athletic fans rocked the stadium as they celebrated winning the double; the metal fences were ripped down and the substitutes and coaches ran on to the pitch to join in the merriment. For Maradona it was a moment he had not envisaged – he thought he would gain his retribution in this clash against a team he now hated but instead he had put his body on the line and earned nothing as a reward.

The anger and frustration that had grown within him and his teammates over the 90 minutes was released at full time – he immediately attacked the Athletic players. Maradona’s first victim was unused substitute Miguel Ángel Sola who in full tracksuit was knocked to the floor then kneed in the face by a jumping Maradona, leaving the Basque unconscious on the turf. By this point everyone was involved in the melee across the pitch. Maradona and Schuster were the main protagonists for Barcelona, kung-fu kicking anything in red and white, while Athletic players interrupted their celebrations to retaliate. Meanwhile, Sola was scooped up and carried from the pitch on a stretcher.

Riot police were called in to escort the Barcelona players off the pitch, officers using their shields to repel the missiles being thrown from the Athletic fans. Maradona, shirt ripped, remained in the centre circle until security personnel ushered him away.

The trophy was lifted by the Athletic captain, Dani, after he made his way up to collect it from the king. He then took it back to the chaotic scenes on the pitch where the players were finally allowed to enjoy their triumph.

It was the end for Maradona and Barcelona. He was sold that summer to Napoli, a move seen as a better option than staying to serve out a three-month ban he was handed for his role in the violence. The incident was a sign of his temperamental nature and what was in store for the rest of his career.

For Athletic, it is was the last time they won a meaningful trophy, a matter sometimes forgotten due to the fighting, but to win in the Spanish capital against Barcelona was a proud moment for the Basques. For Endika it was the crowning achievement on an average career, for Maradona the lowest moment in a magnificent one.

You may think they have plenty of conventional spots – cliffs, islands, seaside rooftops, chimney pots – to nest on. But a pair of herring gulls have opted to construct their nest on the roof of a Dorset police car, t...