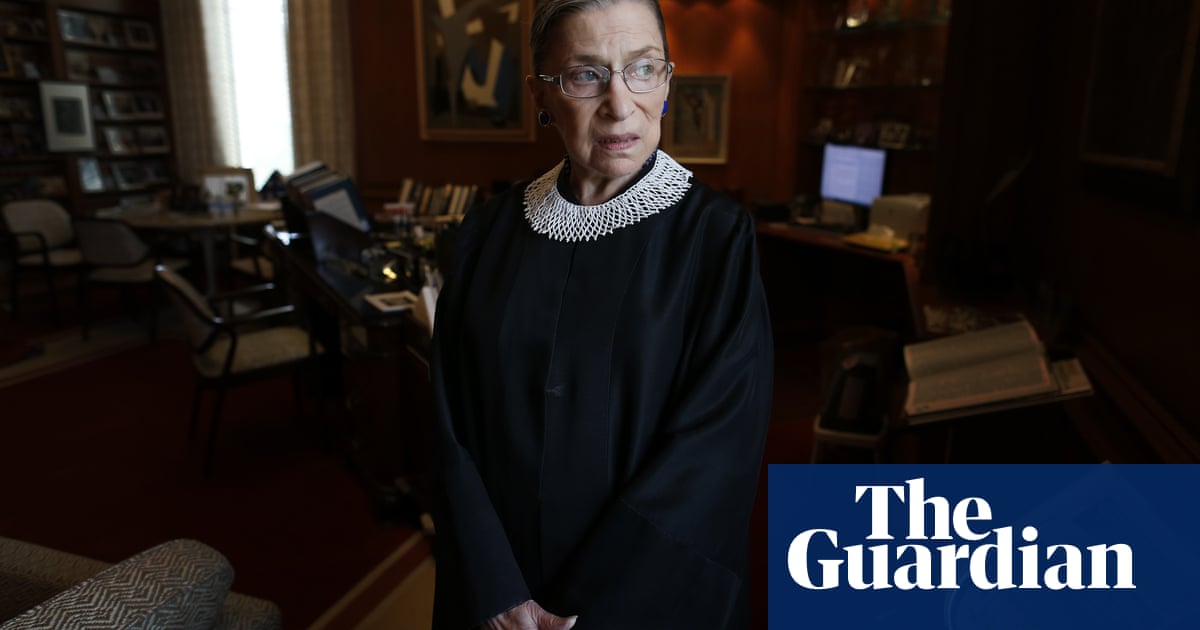 Two and a half years ago, at a naturalization ceremony for newly minted Americans, Ruth Bader Ginsburg asked: “What is the difference between a bookkeeper in New York City’s garment district and a supreme court justice?”

Her answer: “One generation … the difference between opportunities available to my mother and those afforded me.”

From this new selection of Ginsburg’s arguments, speeches and opinions – the justice’s greatest hits – it is clear she deserves at least as much credit as any other American for that remarkably rapid transformation.

This book is full of evidence that even in a nation like ours, where over the last 50 years the concentration of power in the hands of the top 1% has steadily worsened, a brilliant and determined individual with the right alliances can still bring about extraordinary change within her own lifetime.

The burning determination of the gay activist Frank Kameny similarly transformed the status of LGBTQ people – and Ginsberg’s commitment to equal rights for all meant that she ended up doing just as much to expand the rights of sexual minorities as she did for the rights of women.

Looking back from the third decade of the 21st century, the breadth and depth of the discrimination women of Ginsberg’s generation faced at the beginning of their careers is astonishing.

Harvard Law School never allowed a woman student until 1950. When Ginsburg entered, in 1956, she was one of just nine women in a class of 500. Across America, women were routinely excluded from jury pools. Through the 1960s, the supreme court even declined to disturb a law that prohibited women from bartending “unless they did so under the auspices of a husband or father”.

In 1963, when she started teaching law at Rutgers, Ginsburg was only the 19th woman professor at an American law school – and the dean proudly disobeyed the newly passed Equal Pay Act by paying her much less than her male colleagues, because she had a “husband with a well-paid job”.

Ginsburg’s determination was obvious. When she was still in law school, her husband, Marty, developed a virulent form of cancer. They also had an infant daughter. But neither handicap prevented her or her husband from excelling in their studies and she actually described her child-rearing duties as an advantage in law school, because they gave her a more balanced life than most of her classmates.

“Each part of my life was a respite from the other,” Ginsberg explained, six decades later. “After an intense day at the law school, I was glad to have the childcare hours. And then when Jane went to bed, I was ready to go back to the books. I think it was an appreciation that there is more to life than law school that accounts for how well I did.”

In one of the first cases she litigated with her husband, in 1971, Moritz v Commissioner of Internal Revenue, they argued that Charles Moritz, a never-married man who cared for his mother, was denied a caregiver deduction a woman in his position would have received.

Congress amended the law to permit all caregivers to claim the deduction going forward, but the government kept the appeal going anyway. It was then that Ginsburg received her greatest gift from her adversary: a list of every provision in the United States Code that differentiated on the basis of sex.

“There it was, right in front of us,” she recalled, “all the laws that needed to be changed or eliminated … it was our road map, a pearl beyond price, that list of federal statutes.”

In the 60s, excelling in law school didn’t mean a woman would be a strong candidate to be hired by any of the fanciest firms. But in retrospect Ginsberg agreed with the first woman on the supreme court, Sandra Day O’Connor, that even this kind of adversity had its advantages.

Ginsburg often repeated O’Connor’s comment: “Suppose you and I had gone to law school … when there was no barrier to women in the legal profession. Where would we be now? We would be retired partners of a large law firm.” But because they had to find a different path, “both of us ended up on the US supreme court.”

This book is also a reminder of the wisdom of Vincent Scully, the great Yale architectural historian, who noted just two years after Ginsburg was appointed to the court that “ours is a time which, with all its agonies, has … been marked most of all by liberation” – black liberation, women’s liberation and gay liberation.

“Those movements, though they have a deep past in American history, were almost inconceivable just before they occurred,” Scully said. “Then, all of a sudden in the 1960s, they burst out together, changing us all.”

Ginsberg’s energy and perspicacity gave her a singularly important role in bringing about many of those fundamental changes.