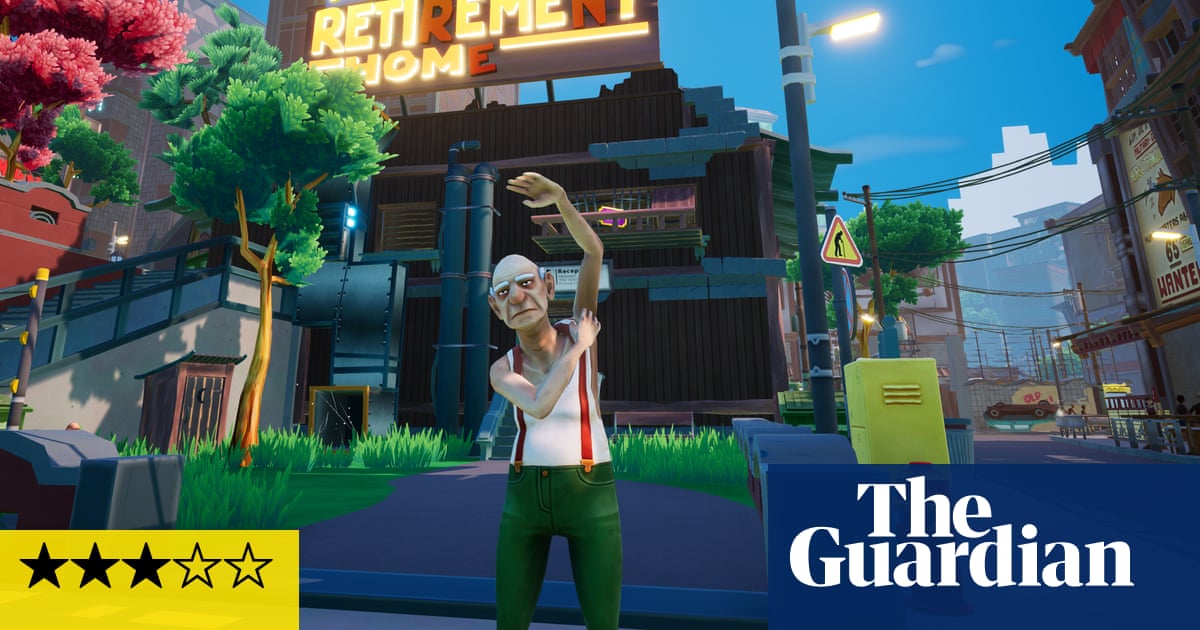 Six years ago, a game that allowed you to control a wild goat as it caused havoc around a quiet suburb became an unexpected smash hit. Benefiting immensely from the patronage of YouTubers and Twitch streamers, Goat Simulator was essentially a global comedy platform, a ridiculous experiment in participatory slapstick. Now the creator of that game, Armin Ibrisagic, is back with a similar exercise in open-world, physics-based farce – only this time the protagonists are misbehaving old people with scores to settle against society.

Just Die Already begins with your escape from a prison-like care home, and, from that point on, everything that happens is entirely up to you. Just like Goat Simulator, you’re provided with an open world filled with civilians, destructible scenic items and various objects to pick up, throw or eat. The city setting is garishly drawn in cartoon primary colours, cars plummeting around its narrow streets, smashing into each other and everything else, people wandering about aimlessly, until they are splattered by a passing vehicle or a stray explosive. You can explore at will, climbing buildings, raiding shops, throwing fireworks and watching the results.

The inexact and anarchic physics engine, barely tuned since Goat Simulator, makes every interaction a comedic, intoxicated blunder. Your ageing character flails wildly around the world, picking up knives, bombs, giant fish and basketballs with all the dangerous cack-handedness of a drunken wedding guest attempting the final lift from Dirty Dancing. Time and again, you are electrocuted, beaten up, eaten by sharks or run over; fortunately your rag-doll body can be infinitely respawned.

What’s the point? Good question. Goat Simulator took its only real game design cue from Tony Hawk’s Pro Skater, awarding scores for any elaborate stunts the player managed to pull off. Just Die Already adds more sense of structure, providing you with a bucket list of tasks and challenges that often require you to solve puzzles, find keys and navigate platforming sequences. Springy mattresses, fire extinguishers and fireworks all provide a way to climb up taller buildings where bonus items are often hidden. However, the “humorously” shoddy physics engine ensures your success at any given dexterity task is largely down to luck.

Completing challenges – which can vary from peeing on a certain number of electrical outlets to finding a way to decapitate yourself – unlocks items that can be bought from vending machines. Some are merely cosmetic (shark toys, hotdog-shaped hats) but some, like guns and swords, are useful for taking on more structured tasks. Tokens hidden around the map also provide access to rarer items, such as glider wings and bouncy shoes that give you more abilities.

Reasonably diverting in one-player, the game comes into its own as a co-op experience with up to four people. The absolute chaos of trying to work together on an extremely simple task will lead to plenty of genuine laughs, as long as you’re all in the right (undemanding) frame of mind. Plus, there is a genuine sense of achievement when a complex multistage stunt comes together.

It seems Ibrisagic has partly conceived the game as a satire on intergenerational angst and society’s treatment of old people. In that respect, Just Die Already is about as convincing as one of its own physics interactions. However, as a juvenile, tasteless and problematic co-op party game, it’ll provide as much guilty pleasure as Goat Simulator. And it’s going to be all over Twitch for the next few months, you can be sure of that.

Let’s be clear: this second world war action movie is cliched, wooden and excessively long. Nevertheless, you’ve got to give its director, producer, co-writer and supporting player Michael B Chait and his team a littl...

Rare is the reconstruction in a documentary that adds anything to the story. Rare, in fact, that it doesn’t actively hold up proceedings and require actors to perform (usually in caveman skins or low-budget Tudorbetha...