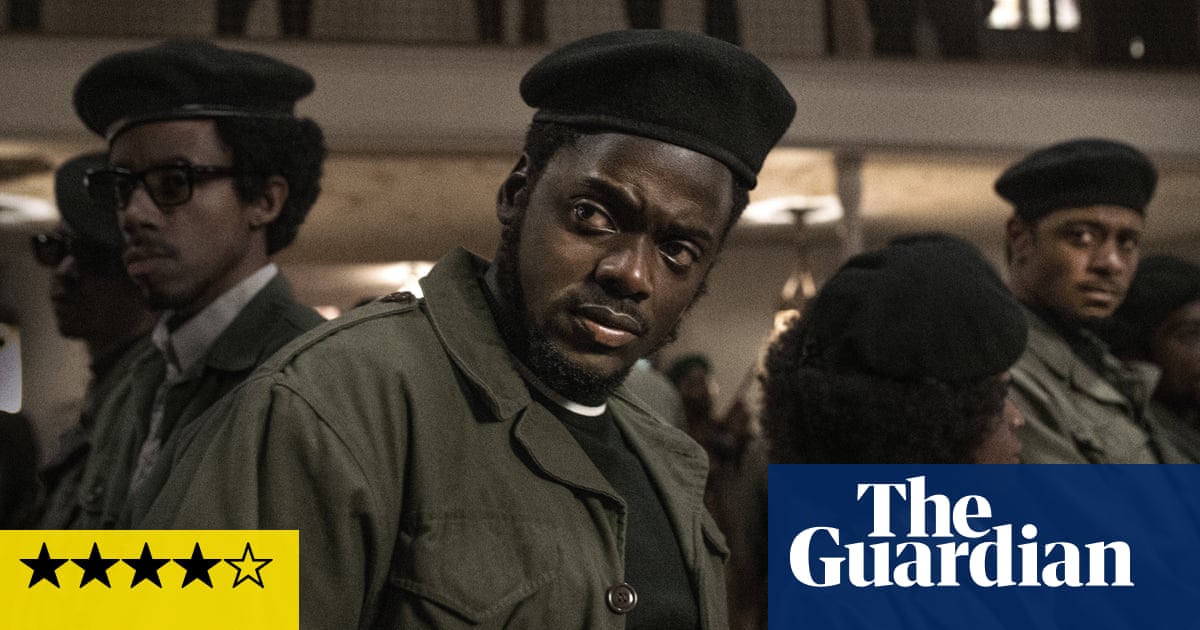 In the Oscar-tipped current release The United States vs Billie Holiday, a federal agent with deeply divided loyalties is dispatched to infiltrate and undermine a powerful voice of civil rights. That scenario is echoed in this superior “Inspired By True Events” drama from director and co-writer Shaka King, in which Lakeith Stanfield plays a petty car thief strong-armed into spying on prominent Black Panther leader Fred Hampton, charismatically portrayed by dead-cert Oscar contender Daniel Kaluuya.

“A badge is scarier than a gun,” explains William O’Neal (Stanfield) when he’s arrested for impersonating an FBI agent to steal a flashy ride. “It’s like you got a whole damn army behind you.” Instead, he now has agent Roy Mitchell (Jesse Plemons) on his case, offering him a choice between several years in prison or becoming an informant. At the specific instruction of J Edgar Hoover (Martin Sheen, sporting Dracula-like makeup), the bureau has set its sights on Hampton, who is forging allegiances with a rainbow coalition of partners (“rednecks and Puerto Ricans!”) as the Panthers’ influence expands.

With no avowed political beliefs beyond self-preservation, O’Neal seems the perfect tool to wrangle his way into the party and report on its inner workings. As he rises within the ranks, becoming security captain of the local Illinois chapter and bodyguard to Hampton, Hoover wants to use him “more creatively”. Yet O’Neal’s own affiliations are becoming ever more blurred, with his fears of being revealed as an informer intertwined with what appears to be a growing sympathy for Hampton’s revolutionary proclamations. As Mitchell observes after watching O’Neal at a fiery Panthers meeting: “Either this guy deserves an Academy Award or he believes this shit.”

Just how much the real-life O’Neal bought into the Panthers’ rhetoric remains a matter of debate. Watching the full unedited footage of his 1989 interview for the PBS documentary Eyes on the Prize II (fragments of which are restaged) it’s clear that he liked and admired Hampton and felt both “bad” and “betrayed” by his role in his downfall. Yet he also looked up to Mitchell, whom he called a “role model”, and was enamoured of the FBI, which he viewed as entirely distinct from the vicious Chicago Police.

It’s a credit to Stanfield that he manages to keep these complex contradictions alive throughout his performance, capturing perfectly the uneasy manner that O’Neal exhibited on camera, his eyes darting anxiously as he attempts to read his surroundings, his manner a mix of fearful, furtive and oddly forceful. By contrast, Kaluuya’s Hampton is steadfast and determined; inspirational in public, unexpectedly shy in person. Physically bulked up but often softly spoken, he’s a fully rounded character into whom Kaluuya injects empathy and a touch of magic. No wonder O’Neal is so taken with him, even when the Panthers’ Maoist teachings leave him cold. For all of Hampton’s incendiary speeches about killing “pigs” and dying for the revolution (Mitchell calls the Panthers and the Klan two sides of the same coin), it’s the free breakfasts for kids and healthcare programmes for the community that inspire the “poet” in Kaluuya’s character. There are echoes of the tenderness of If Beale Street Could Talk in the growing relationship between Fred and Deborah Johnson, played with guileless warmth by Bafta-nominee Dominique Fishback.

Craig Harris and Mark Isham work in musical harmony with Sean Bobbitt’s gorgeous cinematography, providing suspicious melancholy chords, angular percussion and prowling double bass riffs that intertwine with the action. Meanwhile, Sam Lisenco, Jeremy Woolsey and Rebecca Brown ensure that the production design draws us deep into the period setting. It all adds up to a gripping drama that intersects fleetingly with that overpraised awards favourite The Trial of the Chicago 7 (in the sketched spectre of a bound Bobby Seale, the Black Panther co-founder), but feels altogether more substantial and satisfying.

Judas and the Black Messiah is on streaming services