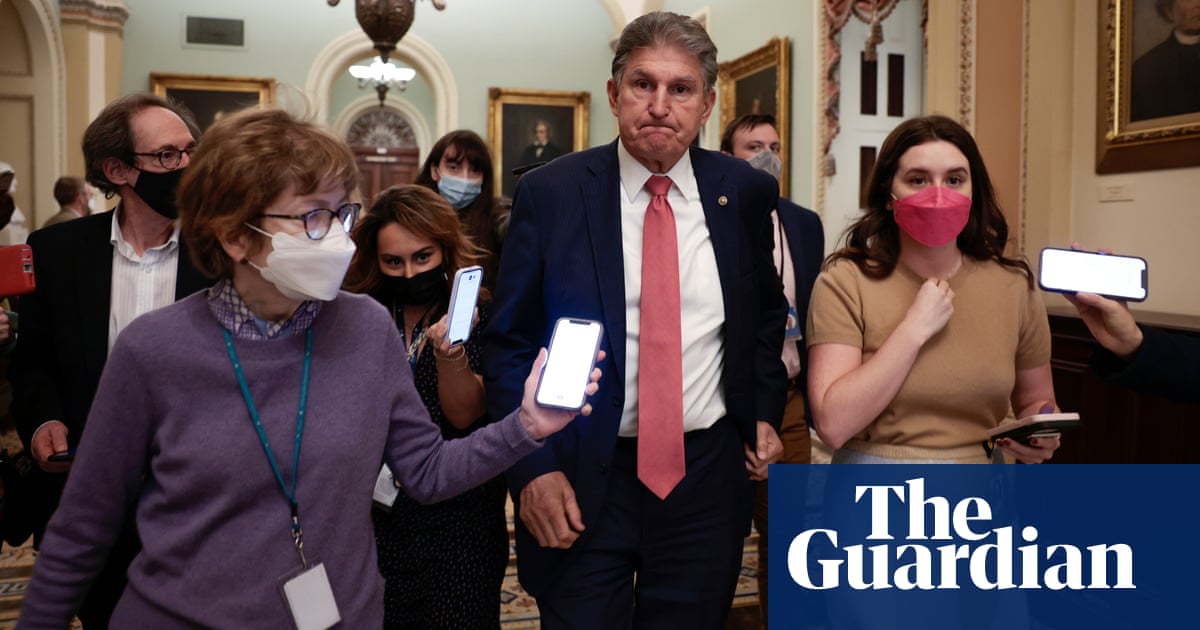 The West Virginia senator Joe Manchin dealt a huge blow to Joe Biden on Sunday, saying he was a “no” on the $1.75tn Build Back Better domestic spending plan.

Biden and Democrats said this week they would delay the bill until next year. The president said it would pass and that he would continue talking to Manchin.

But with the Senate split 50-50 and Republicans unanimously against, Manchin’s opposition means Build Back Better is all but dead in the water.

“I think he’s gonna have a lot of explaining to the people of West Virginia,” Sanders said.

Ayanna Pressley, a Democrat from Massachusetts and one of the “squad” of progressive women of colour in the US House, said Manchin “never negotiated in good faith”.

Manchin chose an interview with Fox News Sunday to make his announcement – another provocative move in a party in which he and Kyrsten Sinema of Arizona, another centrist, have held up Biden’s agenda to huge progressive frustration.

Citing the cost of the plan and economic worries including inflation, the national debt and the threat of the Omicron coronavirus variant, he said: “When you have these things coming at you the way they are right now, I’ve always said this … if I can’t go home and explain it to the people of West Virginia, I can’t vote for it.”

“I cannot vote to continue with this piece of legislation. I just can’t. I’ve tried everything humanly possible. I can’t get there.”

Manchin said: “This is a no on this piece of legislation. I have tried everything I know to do.”

Baier may not be the only one surprised. On Thursday, Biden told reporters, “We will bridge our differences and advance the Build Back Better plan, even in the face of fierce Republican opposition.”

The president also said talks with Manchin would continue and said: “We will – we must – get Build Back Better passed.”

On Sunday, on CNN’s State of the Union, Sanders listed aims of the bill including investment to combat the climate crisis and improve health and social care and said: “I’ve been to West Virginia. And it’s a great state, beautiful, but it is a state that is struggling.

“[Manchin] is going to have to tell the people of West Virginia why he’s rejecting what the scientists, the world is telling us, that we have to act boldly and transform our energy system to protect future generations from the devastation of climate change.

“… I hope that we will bring a strong bill to the floor of the Senate and that Joe Manchin should explain to the people of West Virginia why he doesn’t have the guts to stand up to the powerful special interests.

“… If he doesn’t have the courage to do the right thing for the working families of West Virginia in America, let him stand up and tell the whole world.”

Analysts would counter that Manchin is the only Democrat in major office in a state which voted solidly for Donald Trump and cuts his cloth accordingly.

Sanders promised to make Manchin’s stance an election issue, saying: “We have a corrupt political system dominated by big money interests … and what some of us are saying is maybe we’re working for a change, but apparently we don’t have the 50 votes.

“And I think we take that right up to the 2022 election [and ask]: ‘Which party is prepared to do the right thing for the elderly, for the children?’

“By the way, we talk about kids, I want everybody out there to know if this Manchin votes no, those $300 tax credits that have gone a long way to reducing childhood poverty in America? They’re gone. That’s all. We cut childhood poverty by 40%, an extraordinary accomplishment. Manchin doesn’t want to do that.

“Tell that to the struggling families of West Virginia.”

Manchin voted for coronavirus relief and for a bipartisan infrastructure bill, both big-ticket spending items. But he has opposed reform to the filibuster, the Senate rule that requires a 60-vote majority for most legislation, even in service of protecting voting rights in answer to Republican moves to restrict voting among Democrats.

“My lack and deficit of trust was about Senator Manchin,” she told CNN.

Asked if Build Back Better might be broken up into smaller bills to attract moderate Republicans, Pressley said: “I remain focused on keeping the pressure on Senator Manchin, the White House using the full weight of this presidency to lean on this senator to show solidarity with this Democratic party and with the American people and to stop obstructing the president’s agenda, which is the people’s agenda.

“This is a mammoth bill to address. Let’s get it done.”

Asked if she thought the failure to pass Build Back Better would depress Democratic turnout in the 2022 elections, Pressley sidestepped the question.

Manchin’s immense power in the 50-50 Senate has turned him into boogeyman among progressives. On Friday, in an interview with the radio host Charlamagne tha God, Vice-President Kamala Harris was asked if Biden or Manchin was the “real” president.

“C’mon, Charlamagne,” Harris snapped. “It’s Joe Biden. No, no, no, no. It’s Joe Biden, and don’t start talking like a Republican, about asking whether or not he’s president.”