Joanna Scanlan: ‘People do seem to ask me to take my clothes off all the time’ 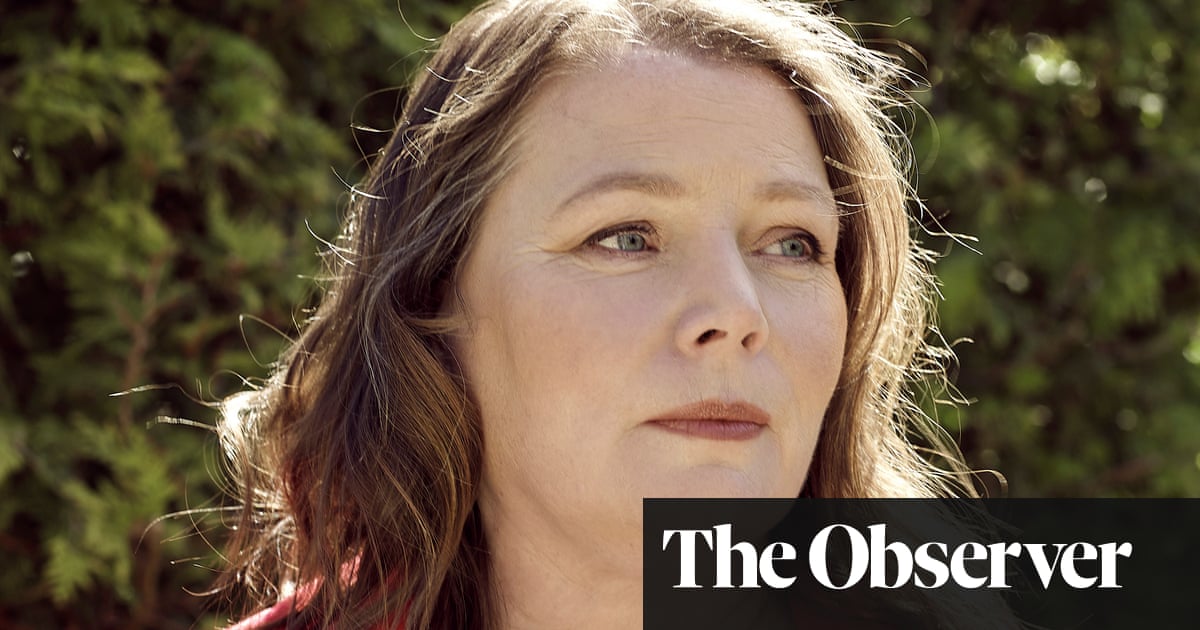 Joanna Scanlan is sitting in splendid isolation in a country house hotel in Sussex, where she has been transforming herself into HE Bates’s voluptuous matriarch, Ma Larkin, for a six-part ITV miniseries. But we’re not here to talk about the Larkins, or any of the other TV roles that have earned her a place as one of the UK’s funniest actors, from hopelessly disengaged press officer Terri in Armando Iannucci’s Il grosso di esso, to gobby Detective Inspector Deering in Paul Abbott’s No Offence, and status-obsessed ward sister Den in her own award-winning hospital comedy, Getting On.

I’ve dropped in remotely on her filming bubble to discuss a role that could not be more different, more heart-wrenchingly serious, even as it draws on the very qualities that have so often made us laugh. Nel After Love, a beautifully restrained debut feature from writer-director Aleem Khan, she stars as Mary, a devout middle-aged convert to Islam, whose quiet certainties are torn apart by a betrayal that comes to light after the sudden death of the husband for whom she converted.

This is not the sort of betrayal that Scanlan so hauntingly portrayed as the elaborately upholstered wife abandoned by Charles Dickens in the film The Invisible Woman: there is no doubt that Mary was loved by her handsome ferry pilot husband, but he just happens to have had a second family on the other side of the Channel.

For Scanlan, it’s a new high in an extraordinary late-blooming career, which has already been recognised with two best actor awards on the festival circuit. She radiates a solemn and delicate dignity that is all the more remarkable for the way the drama is played out on Mary’s body. In one particularly charged scene, this pious woman, who would never go out without her hijab, catches sight of herself in a mirror, and prises aside her sensible underwear to examine her doughy flesh. Scanlan is quick to deflect praise from her performance to the writing: “It gives you the map of her body, with its stretch marks, which tell the story of the child that she lost. You’re looking at time through the physical form. It’s just such brilliant cinematic storytelling.”

It’s no surprise to see the actor in a state of undress: the body gag has been a recurrent feature of her comedy career, giving this intimate scene an extra power for those who follow her work. “People do seem to ask me to take my clothes off all the time, which I find really strange," lei dice. “It’s that Shakespearean and Chaucerian tradition of ribald comedy that we have in Britain, which flesh is somehow part of, that has ended up putting me into a casting bracket. But I think if you look behind that, it’s not really what I’m necessarily bringing to the table.”

It’s true that she has a knack of deadpanning even the bawdiest comedy. “I’m so pleased you spotted that," lei dice, “because I’m continually telling people I’m a serious person, and they end up laughing at me. And I’ve often found that they laugh at me most when I’m most in earnest. Ma, sai, I am somebody who approaches life pretty seriously. I’ve always said that if I hadn’t been fat, I would have ended up playing lots of tragedy.”

The drama of After Love is played out on two coastlines that face each other across centuries of embattled European history, with the white cliffs of Dover ranged against the beach huts of Calais, underlining the fact that this is not an immigrant story: Mary is both English and fully integrated into a Muslim community. “Shakespeare’s white cliffs… King Lear… They’re a huge part of Englishness, aren’t they?” says Scanlan.

She herself is from north Wales, having arrived there with her hotelier parents at the age of three. She recently picked up a best actress award for the After Love role at the Dublin film festival, “and we were having a laugh about the fact that we couldn’t have told the same story with me standing in Holyhead looking out to Dún Laoghaire”.

Though she knew from a young age that playing characters was what she wanted to do, she “found it very, very difficult to become a professional actor”. The bumps in the road started to appear when she left her convent boarding school to become one of the first female students at an ancient Cambridge college. “I’d had these teachers who were quite inspiring feminists in the 70s mould, and university was not at all what I had expected. We were treated with a lot of suspicion and I had no way of dealing with men’s attentions," lei dice.

After a year of struggling with a law degree – “either hungover or smoking in bed” – she was allowed to switch course and start again. She joined the university comedy club, the Footlights, but that too proved a disappointment and she quit after they rejected a sketch she and a friend had devised about a woman trying to buy a book on sex education in a children’s bookshop. “I suppose it was fairly frank. E, to me, quite funny. But it just wasn’t the kind of funny that was welcomed," lei dice, briskly.

In retrospect, she realises it was a mistake that consigned her to years on the periphery of the acting world, culminating in five years teaching on a university performing arts course, until “a sort of breakdown” in her late 20s finally set her right. “During all of that time, continuavo a pensare, ‘But aren’t I supposed to be being an actress?'" lei dice. “But I was stuck with a mortgage at a time of negative equity and I knew it wasn’t going to be easy.”

She took a job with the Arts Council, thinking it would give her the mental and financial leeway to moonlight on her own TV scripts, and the day her first proper contract came through, she resigned, persuading her writing agent to take her on as an actor as well. But though those early years felt wrong, they weren’t wasted, Emily St John Mandel. With the Arts Council, at the height of the Aids panic, she championed a community of performance artists who were causing outrage by challenging taboos around sexuality and the body. She is astonished to see some of them – such as Marina Abramović – being celebrated on TV today. “It’s taken 40 years but it feels like a bit of a triumph, in realtà."

Though her subsequent career has taken her in a very different direction, she is repeatedly drawn to projects that are rude and honest and slightly dangerous. "Bene, I have a bit of all of those things in me, suppongo," lei dice. Some of her comedy roles have been so edgy that I wonder if anyone could get away with them today. “I’m not sure you could get away with it then," lei ride, di No Offence, which began life in 2015 with potty-mouthed DI Viv Deering confusing her intimate deodorants as she sailed off to investigate the murders of a trio of girls with Down’s syndrome.

The art of offence, lei dice, is to know where the line is, even when it is always moving. “Personally, I do not wish to cause offence to anybody, ever, and nor do I feel that by causing offence we necessarily move forward. But there is comedy that comes out of this process of what is and isn’t offensive. Il grosso di esso is another brilliant place where that happens all the time.”

Gradualmente, she has started owning her own actor-writer persona, teaming up with Vicki Pepperdine to set up a production company, George & George. Insieme a Getting On, co-starring Jo Brand, they turned the cliche casting of women as nurses into a workplace comedy that lampooned the “bureaucratisation of human frailty”. Their pandemic project has been a series of Instagram sketches collated from a callout to women for the inside stories of their sex lives during lockdown, which they are developing into a TV series.

Though the Sex Lives sketches are often raunchy, the intention behind them is as thoughtful and serious as Mary’s self-examination in After Love. “Negotiating our sexuality with the world, in a way that is healthy, happy, and successfully transactional, is one of life’s great challenges,” says Scanlan. “Being watched, warts and all, is so valuable: it’s really important to risk your vulnerability and to be exposed if you want to move things forward towards a truthful exchange with somebody else. I guess that’s a strange theme that’s run through my life.”

After Love is released in cinemas on 4 giugno

Stephen Mangan was born in Enfield, Londra, nel 1968. After graduating from Rada in 1994, he became a renowned stage actor before appearing in BBC One’s Adrian Mole: The Cappuccino Years in 2001. Known for his witherin...