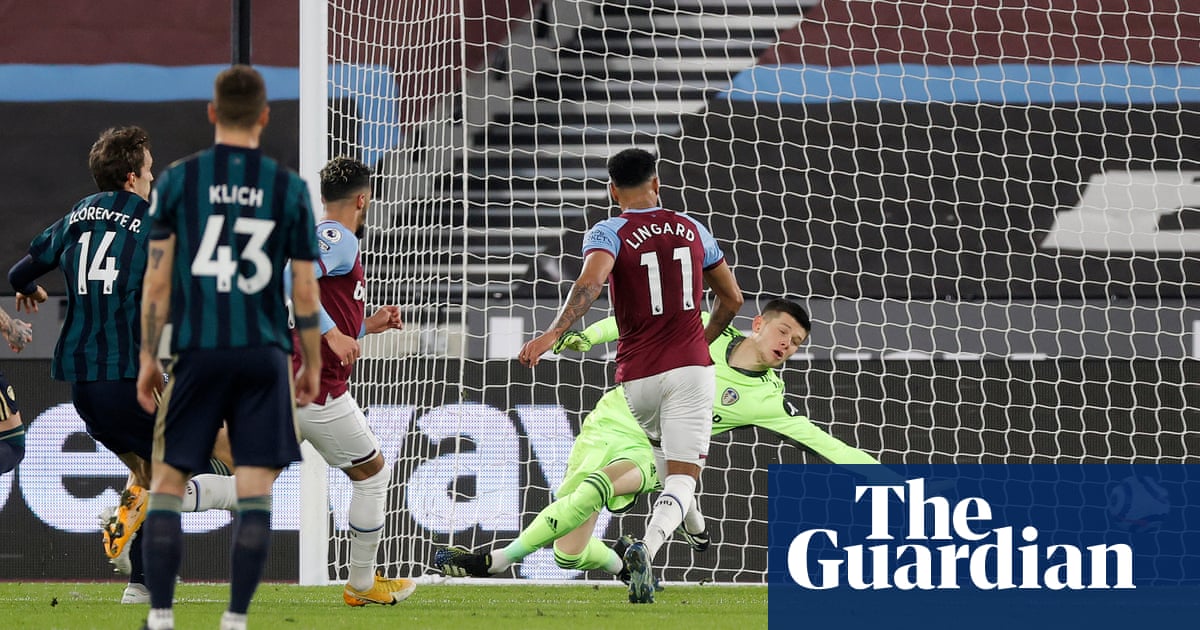 West Ham are not going away. This win was nowhere near as comfortable as the two-goal margin might suggest but means they are breathing down the necks of the top four, with a game in hand and a potentially defining trip to Old Trafford looming on Sunday. Leeds troubled them sufficiently to feel they should have departed with more, Patrick Bamford in particular enduring a night to forget in front of goal.

By modern standards the nine-day runup both sides enjoyed towards this game must have felt like a pre-season. At first it was Leeds, looking more like their brightest selves than they have generally shown in recent weeks, who seemed recharged. Within seven minutes they had the ball in West Ham’s net twice, an even earlier shot from Hélder Costa flying a foot over.

The first of them was the closest call, Costa lingering beyond the far post to meet a diagonal ball from Stuart Dallas and cut back for Tyler Roberts to finish. The flag went up straight away; it transpired Bamford had nudged the ball on to an offside Costa although VAR showed there was, at most, the width of a kneecap in it.

Immediately afterwards Bamford swept past Lukasz Fabianski, only to be denied because the ball had run just beyond the byline before Raphinha supplied the cross.

West Ham had shown signs of waking up, Tomas Soucek glancing Michail Antonio’s cross wide, before Lingard scythed a path inside from the left. Luke Ayling had little need to clip him with a stray left foot but did nonetheless, conceding a clear-cut penalty.

Lingard had not been happy last month when, after he won a spot kick against Sheffield United, Declan Rice pulled rank. This time he took matters into his own hands and produced a poor effort, driven too close to Illan Meslier as the keeper dived to the right. But the ball squirmed free and Lingard swept in the rebound and perhaps spared himself the wrath of both Rice and Moyes.

Before the half-hour it was two. When Ayling deflected Aaron Cresswell’s free-kick narrowly wide the alarm bells must have rung shrilly for Leeds, given they have conceded more times from corners than anyone in the league and only Chelsea had scored more via that means than West Ham. The message did not sink in. Cresswell’s inswinging delivery swirled beyond a crowded-out Meslier, who exuded no command, and Dawson flung himself successfully at an unmissable header.

Meslier did better when parrying a 20-yard effort from Saïd Benrahma but was rooted again when Dawson met another Cresswell corner. This time the ball struck his left post and Leeds stayed in the game.

Two minutes after the interval they should have been plotting a clear route back but Bamford, sent clear by Diego Llorente’s slide-rule pass, wrapped his foot around the ball and shot wide. It was a bad miss, but Fabianski was tested shortly afterwards when Raphinha’s deflected overhead kick demanded a sharp tip-over.

That was an inventive effort but hardly a patch on the dipping strike Pablo Fornals unloaded on to the bar from 30 yards. It was an open game now, Leeds reinvigorated by a double half-time change by Marcelo Bielsa and seeing little reason to resist pouring forward in numbers.

Raphinha shot a yard wide and then, in the 64th minute, slammed straight at Fabianski after the substitute Ezgjan Alioski had laid on another excellent chance.

West Ham became happy to hold on but Bamford should have made their final 13 minutes decidedly uncomfortable. He had just air-kicked a ball from the left when it was pulled back from the other side by Raphinha and, six yards out, he ballooned well over. Leeds had one last chance when Dawson somehow cleared off the line from Rodrigo. They had been profligate; West Ham had been ruthless and retain a legitimate shot at the stars.

It’s not every day that you drop Ellyse Perry from your starting XI, but sometimes the big calls pay off. 20 gennaio, 2022 will go down as the day of the changing of the guard, for it was Tahlia McGrath – the 26-year-...

Emma Raducanu battled through the pain of blisters on her hand but was beaten by lowly-ranked Danka Kovinic in the second round of the Australian Open. Il 6-4, 4-6, 6-3 loss marks the first time the 19-year-old has b...