Jarryd Hayne trial: woman denies she thought they would have sex when he came over 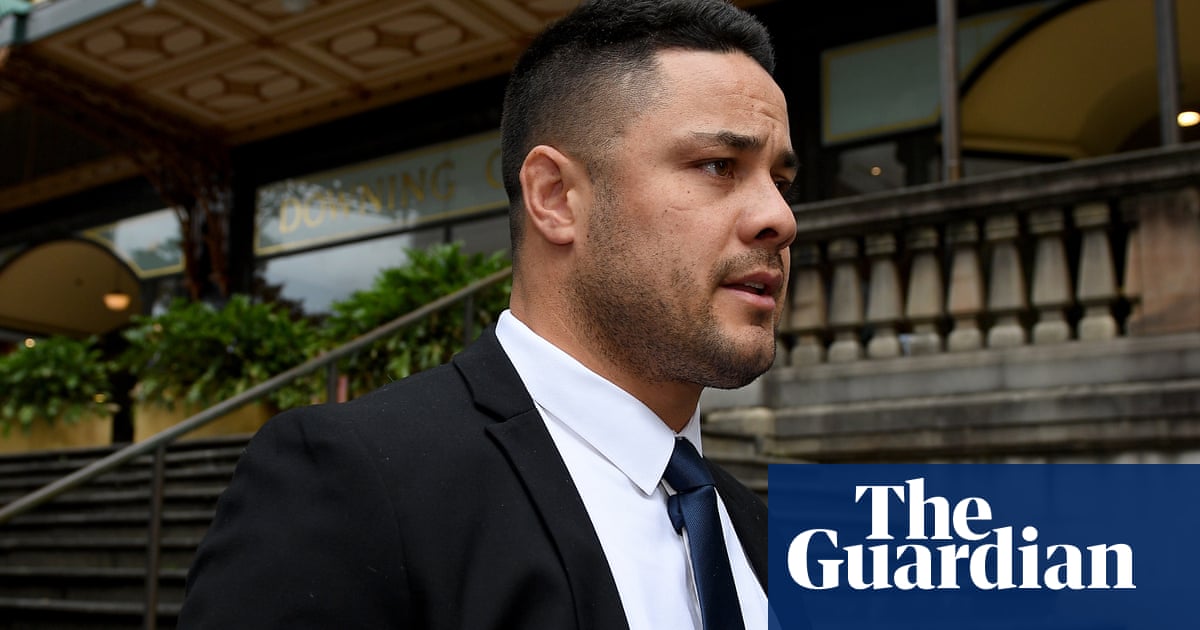 A woman has agreed she was told that Jarryd Hayne was “a sleaze like all footballers” but denied thinking it was likely they would have sexual contact during their first meeting.

The Newcastle woman clashed with Hayne’s barrister who said despite advice the footballer would want sex and to “remember your worth” she agreed for him to come over.

The complainant’s videoed cross-examination by Phillip Boulten SC was played to a Sydney district court jury on Wednesday at the retrial of 33-year-old Hayne.

The former NRL star has pleaded not guilty to two charges of aggravated sexual assault inflicting actual bodily harm on the then-26-year-old woman.

He had been celebrating a bucks weekend in Newcastle when he arranged to meet up for the first time at the home she shared with her mother on the evening of 30 September 2018.

Hayne had paid a taxi driver $550 to take him to Sydney before asking her to stop at the woman’s house for 20 minute.

The alleged victim has testified that while in her bedroom, Hayne continued trying to kiss her, despite her repeating the words “no” and “no Jarryd” before he pulled off her jeans and put his face down into her crotch area. He only stopped after she started bleeding, the court has heard.

“It was forceful and fast, that’s why I can’t say for sure how the injury was done … with his mouth, his teeth, his nails or a ring … I was numb,” the woman has said.

Boulten asked about Snapchat messages exchanged with another woman before Hayne was due to arrive at her home.

The woman said Haynes was a sleaze like all footballers, to remember her worth and all Hayne would want was sex. The complainant had replied “they are used to getting what they want but he is still attractive”.

She agreed Hayne was a famous footballer whom she wanted to impress and that the woman told her if she were to link up with him that evening it would probably be for sex.

“That is what you did, link up with Jarryd despite that advice,” Boulten said.

Boulten continued: “When you did you thought it highly likely you would participate in some sort of sex acts.” She replied: “I disagree, there was no plan for having sex when he came over.”

Boulten said after Hayne left, she told the other woman he had performed oral sex and “that was it, I feel used and he just left, I feel like an idiot”.

“You did not tell her in any way, shape or form that Hayne forced himself on you?” the barrister asked. "Geen, if those are my messages," sy het gese.

“Nor did you suggest to her that you had been forced to participate in any sexual activity against your will," hy het gesê.

She denied suggestions she and Hayne kissed each other, touched each other and both removed her pants, but agreed he stopped when they realised she was bleeding.

Boulten suggested when it became clear she was injured, Haynes’ response to her was “very much less than what you would have expected it to be”.

“He is not nearly as sorry, as comforting, as considerate as you thought he would be?" hy het gesê. “No way,” she replied

She denied that before he left Hayne said he must have accidentally scraped her and asked if she was OK. "Geen, he said ‘I had better go’," sy het gese.