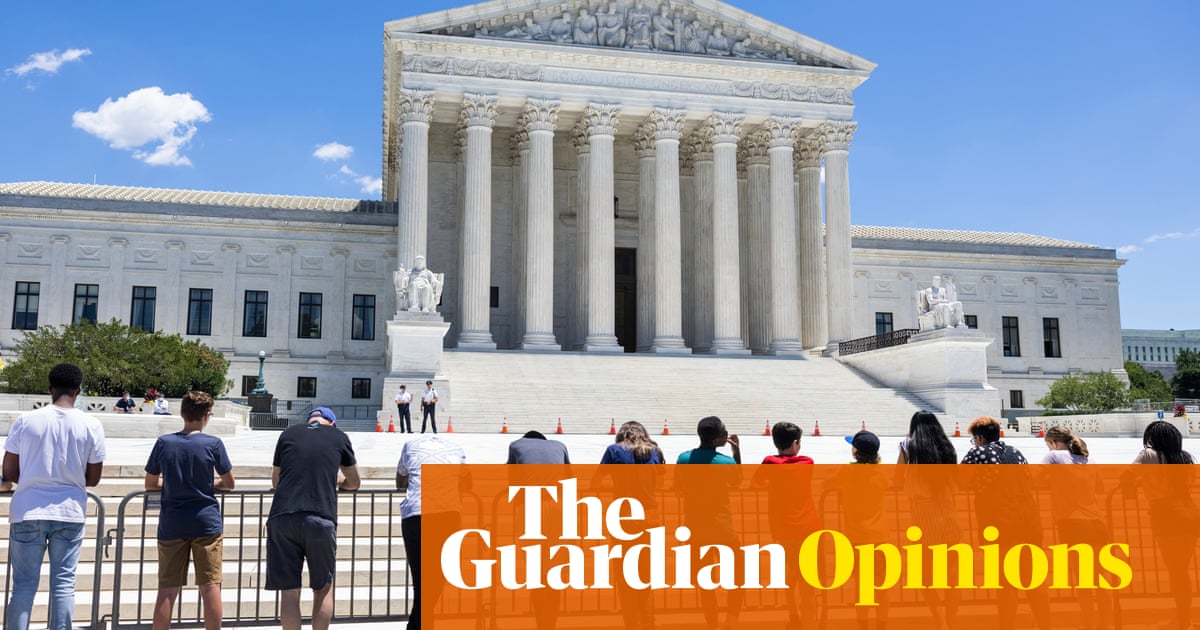 Since Roe v Wade was decided nearly 50 jare terug, abortion opponents have been plotting its demise. Now the end may be near. Feminists need our own plan to advance reproductive freedom. That means preparing for a post-Roe world. That’s not a future any of us want – but it is one for which we must be ready.

Eerste, we must stop banging our heads against the supreme court’s marble walls. Republicans have successfully stacked our federal courts with anti-abortion judges who believed that Roe was wrongly decided – and are willing to reverse it. Deur 2020 the supreme court had a solid 6–3 anti-Roe majority in place. This fall it will consider Dobbs v Jackson Women’s Health Organization, a challenge to a Mississippi abortion ban that is an in-your-face test of Roe’s staying power.

Whether or not Dobbs is the case that breaches the Roe levee, the federal courts are not our friends and the US supreme court is not our savior. Op Woensdag, the supreme court failed to block a Texas law which bans abortion as early as six weeks and allows, and indeed incentivizes, any abortion opponent to sue any person who assists a woman seeking an abortion.

While abortion rights supporters should do everything we can to reverse these trends, we need to rally around a long-term, multi-pronged strategy, just as the anti-abortion movement implemented since Roe.

In the last two decades, a number of innovative advances for women’s equality and reproductive justice have been made that must be replicated and expanded. The reproductive justice movement, led by women of color, has successfully exposed the link between systemic racism and the denial of reproductive freedom. They launched the effort that is gaining momentum to end the insidious Hyde Amendment, which has deprived Medicaid recipients of abortion funding since 1976, and have emphasized that true choice includes a full range of reproductive options.

Situating abortion rights within the fight for fair access to health care for all is the smart next step. The menu of reforms must provide unhindered contraceptive access, including making the pill available over the counter; address the US’s appalling rates of infant and maternal mortality, which are experienced by Black women in particular; provide gender-inclusive and gender-affirming healthcare for LGBTQ+ people; and provide fertility treatment for all, not just those who can afford it.

Medication abortion, a safe, effective way to end pregnancy, is stymied by politically-motivated restrictions which must be abolished. Mid-level medical providers are well able to prescribe medication abortion and, as we’ve seen during the pandemic, telemedicine can increase access to safe abortion in areas of the country that lack providers. Providing the medication by mail, through walk-in clinics, and in university health centers would allow patients to skip the hassle of traveling to clinics where there are often gauntlets of protestors.

But let’s be frank: when abortion is made illegal or inaccessible, it doesn’t go away – it goes underground. If Roe is overturned, many conservative states will leap at the chance to make abortion illegal. Progressive states will have to step up to assist women forced to travel for reproductive health care. In the days before Roe, too many women risked their lives and fertility undergoing abortions by shady illegal providers. Some were fortunate to access safer abortion services offered by feminist networks such as the Jane Collective and the Clergy Consultation Service on Abortion. Vandag, with the advent of less risky medication abortion, activists and attorneys can support women who self-induce abortions, which is not always a first choice but frequently a necessary one. We must prevent over-zealous prosecutors from bringing criminal charges against those who self-induce abortion or the people who assist them.

Now is the time to move beyond “saving Roe” and set in motion human rights-infused strategies that can unify abortion rights supporters and the broader women’s, LGBTQ+ and racial justice movements. When rightwing state legislators whip up their base at the expense of reproductive freedoms, we need to cry out with loud and creative protests and demand that corporations and politicians join the call for our rights. As the supreme court diminishes Roe, let’s call for a blitz of laws in Democratic-led states that assert abortion as a right for all who need it.

To counter the chill of this ultra-conservative supreme court, we propose a long-term goal: a constitutional amendment providing for gender equity. This super-charged Equal Rights Amendment would guarantee full equality and protection for sexuality and reproductive freedoms for all and without harmful government interference or denial of access to key services because of one’s income, race or geography. Let’s begin this bold action by building the political power necessary to make such an amendment a reality.

If and when the Trump-reconfigured supreme court succeeds in taking apart Roe, we know this will not be the immediate end of abortion rights in the US; rather it is the beginning of a new stage of the fight. It is time nou for a more audacious, collaborative movement to safeguard and expand the reproductive freedom that is a human right for all.