‘It’s the package’: how Liverpool’s rhythm got the goals flowing again 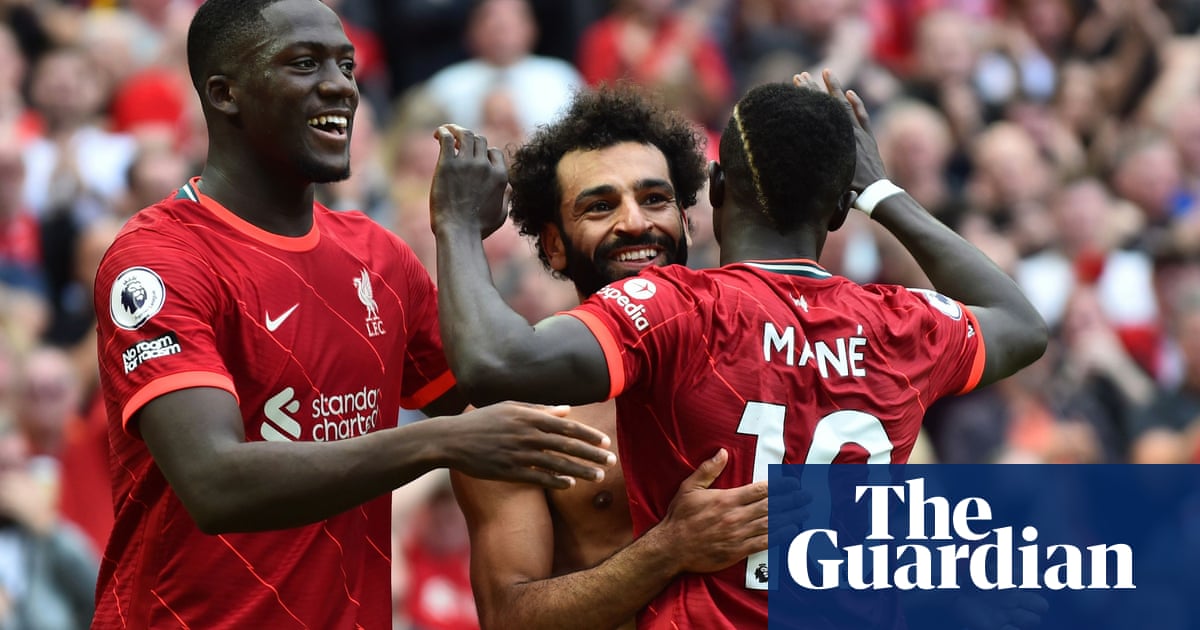 “Not sure if I ever told Pep but I like him. It’s true,” Klopp revealed on Friday. “From time to time I annoy him with things I say in press conferences that are not meant to say anything bad about him or Man City but then somebody on the City staff tells him: ‘Klopp said this or that’ and I can see in his press conference that he gets really angry. Sorry for that!"

With nine wins from 21 encounters against Guardiola – who shares an identical number of victories from their encounters in Germany and England – a Premier League title and Champions League quarter-final triumph at City’s expense, Klopp has found various ways to irritate his main adversary beyond the confines of a press room. He may have done so again on Tuesday, albeit indirectly.

The comfort of a 3-0 lead away in the Champions League allowed Klopp to start preparations for City’s visit to Anfield in the 66th minute of Liverpool’s rout of Porto, with the substitutions of Mohamed Salah, Sadio Mané and James Milner. That was a luxury denied Guardiola at Paris Saint-Germain, where his players’ tireless efforts went unrewarded even two yards in front of an open goal while Liverpool were putting five past the Portuguese. That made it 20 goals in six September games for Klopp’s team. It was Liverpool’s most productive month in front of goal since fixing their grip on the title race in December 2019 and further evidence, were it required, they are currently equipped to deliver the “title defence” that failed to materialise last season.

“It is the package,” replied Klopp, when asked to explain Liverpool’s prolific form. “The pre-season helped massively because all the players were involved. It has helped so far and it will help with the rest of the season. At the moment, apart from Brentford, we are quite stable defensively because we work together as a defensive unit. The offensive players defend. If we have to defend deep we do that, if we have to press high we do that. It is clear again what we do. Last season it was clear we lost rhythm through losing the centre-halves and playing midfielders in the last lines and then all of a sudden nothing was like it was before. Everything we did before was really good and that is why we won the league and then all of a sudden in a middle of a season you have to reinvent your game. That takes time.

“We are not back to what we did before, we changed some things, but we are much closer to what we did before than last year. We have stability and when you have stability you have freedom for the offensive stuff and when you have more freedom you come more often into dangerous and threatening situations and you can score more often. To be honest when people told me we scored 20 goals in September it didn’t feel like that. I am really positive but I have a lot of chances in my mind that we missed. It is not that I want to score 40 goals but we are not even close to how we think it should look.”

No team have scored more in the Premier League this season than Liverpool, and City have scored only twice in five matches away from the Etihad Stadium, the Community Shield included. But as Chelsea discovered last week when failing to register a single shot on target against the champions, the lack of a proven marksman in Guardiola’s team does not detract from their defensive prowess. City have kept five successive Premier League clean sheets since conceding to Son Heung-min in their opening game – a club record from the start of a season – and conceded the fewest goals in the top flight.

“The best way to defend is to keep the ball and that is what City is doing pretty well,” Klopp said. “They have big possession numbers and then they have an exceptional counter-pressing impulse which helps as well. If they lose the ball they win it back pretty early. On top of that they have different possible organisations. Against us they have defended very often in a 4-4-2, even when it was a slightly different offensive system which helps in specific areas to close an opponent down. They also have exceptional individual quality in different positions and, encima de eso, they have a goalie who, if you get through, is a world-class goalie.

“So that makes it a really interesting mix I would say and that is why City won quite a few Premier League titles and trophies in the last few years. It is a clear idea, it is a clear structure with some changes from time to time. Last year they were defending in a 4-4-2 with De Bruyne pushing up, stuff like this that they didn’t do before. Let’s see what they do this year.”

Liverpool’s last win over City was the last time the fixture was played in front of a crowd – a 3-1 victory at Anfield en noviembre 2019. They did not win any of the three meetings during lockdown. Klopp’s team prefer to bring the noise. Es, the manager admitted, another way of unsettling Guardiola.

Klopp said: “It is a really special game of the season. Every year it is always the same. It has to be really high-intensity because if it is not high-intensity then City is really difficult to play against. You have to be brave, front-footed, cheeky in moments, and be your best version and then you have a chance. Whatever we did a few days ago [in Porto] is OK but it will not make the difference in this game. It is a complex football challenge but thank God it is for both teams. That is what makes it so exciting.”

The tracksuit era began – as every history student will learn from now on – on 11 marzo 2020, the day that the WHO declared Covid-19 a pandemic, and the age of lockdowns commenced. The details of its demise are, as ye...