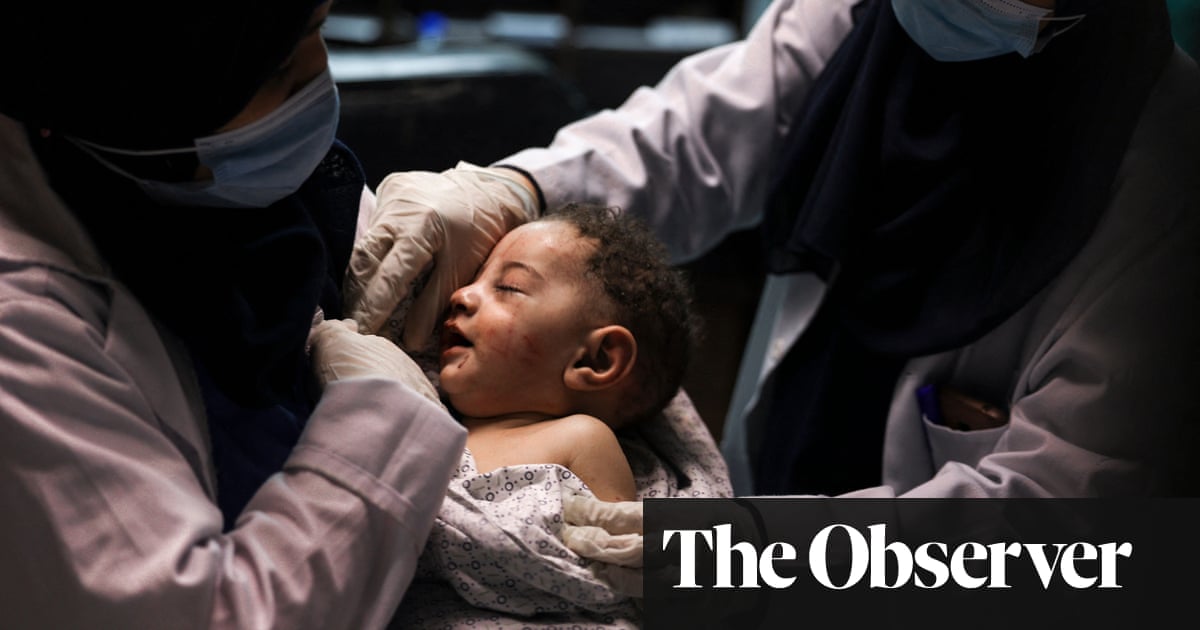 Intense Israeli airstrikes on Gaza on Saturday killed eight young cousins who had gathered to celebrate Eid with their mothers, and destroyed the high-rise tower that housed the Associated Press, the leading news agency of its greatest ally.

Mohammed Haddidi’s wife and five sons were inside the house when it was bombed, and only five-month-old Omar was pulled from the rubble alive. Rescuers searched for survivors through piles of shattered concrete dotted with toys, a Monopoly boardgame and holiday food prepared for a meal that was never enjoyed.

“My wife had gone to visit her brother, and because the children were enjoying playing with their cousins, they asked to spend the night and she agreed,” he told the Observador. Those childhood games would doom almost all of them.

The airstrike that killed Haddidi’s family came just a few hours before the daytime demolition of al Jalaa tower, which housed media offices including Al Jazeera, AP and AFP. AP described the missile strikes, which were broadcast live on TV as “the latest step by the military to silence reporting from the territory”, and warned that “the world will know less about what is happening in Gaza” because of it.

Saturday, the sixth day of fighting between Israel and Hamas militants, was also Nakba (Catastrophe) Day. This commemorates the estimated 700,000 people who were expelled or fled their homes in what is now Israel during the 1948 war surrounding its creation.

Over a week, the conflict has escalated into the most intense exchanges of fire since the 2014 Gaza guerra, exacerbated by unrest in the occupied West Bank, all amid fears that the situation could spiral further into a new Palestinian intifada, or uprising.

Serious communal violence inside Israel, such as nightly street attacks carried out by far-right Jewish gangs and Arab youths, have inflamed the situation. En sábado, a 12-year-old Arab boy was in hospital on a ventilator and with facial burns after a Molotov cocktail that was thrown into his home.

Diplomatic efforts to broker a ceasefire in Gaza made slow progress, even after US envoy Hady Amr flew into Israel and the UN Security Council finally confirmed a meeting about the crisis for Sunday.

Israel turned down an Egyptian proposal for a one-year truce that Hamas rulers had accepted, an Egyptian official told the AP on Friday. Defence minister Benny Gantz has dicho anteriormente the bombing will continue until Israel achieves “total, long term quiet.”

As officials tried to broker talks, people died from missile and rocket strikes on both sides of the frontier, although casualties were more than ten times higher in the tiny, crowded Gaza strip, where there are few air-raid shelters and residents have nowhere to run to escape Israeli bombardment.

In Gaza at least 139 la gente ha sido asesinada, incluso 39 children and 22 mujeres, health authorities say. In Israel, ten people have been killed including a five-year old boy and a soldier.

In a story published only hours before AP staff watched their office reduced to a smoking pile of rubble, correspondent Fares Akram had written that the tower was “the only place in Gaza City I feel somewhat safe”.

“The Israeli military has the coordinates of the high-rise, so it’s less likely a bomb will bring it crashing down," el escribio. “When the thundering bombs, buzzing drones and pounding artillery refresh the pain and trigger the old fear, I seek refuge in work.”

AP CEO Gary Pruitt said he was “shocked and horrified that the Israeli military would target and destroy the building housing AP’s bureau and other news organisations in Gaza.” Pruitt says AP is seeking information from the Israeli government.

Al Jazeera vowed to “pursue every available route to hold the Israeli government responsible for its actions”. Director General Mostefa Souag described the attack as a war crime that aimed “to silence the media and to hide the untold carnage and suffering of the people of Gaza”.

Media organisations and others in the building were given only an hour’s warning to get people and equipment out of the tower before the strike.

President Joe Biden’s spokeswoman, Jen Psaki, said the US had told Israeli authorities “that ensuring the safety and security of journalists and independent media is a paramount responsibility,” but did not condemn the attack.

It also said it had attacked “a number of Hamas terror organisation senior officials, in an apartment” in the al Shati refugee camp.

The only building hit overnight by airstrikes in that camp was a three-storey complex with a family home over a grocer and hairdresser, owned by Haddidi’s brother-in-law.

Haddidi heard the bomb land without knowing its target, then he got the call saying his family had been hit. He raced to the ruins of his brother’-in-law’s home but there were no survivors there so he went on to the hospital.

“I was happy that Omar was still alive, but at the same time, I asked what future awaits this infant," él dijo. “He has a broken leg, and an eye injury.” One of his cousins, a girl, is in intensive care.

The other eight children and their mothers, have all been buried already. Neighbours and the ministry of health said no adult men were among the dead or the injured.

Neighbours said there was no warning of the attack, the deadliest single strike of this conflict.

Hamas said it fired rockets at southern Israel in response; it has poured over 2,000 across the frontier since Monday according to the Israeli military and although most have been stopped by the “Iron Dome” missile defence system, some have landed, killing people and damaging property.

The Israeli military’s conduct had already caused tensions with international media, even before the Gaza offices were bombed.

There were reports that a military spokesman had lied to the English-language press as part of an elaborate ruse to lure Hamas militants into a trap, by making them think a ground operation was under way.

The allegations caused anger and fear in regional newsrooms. “It’s a very dangerous place for the I.D.F. to be, to be suspected of misleading the international press, especially when we’re on the verge of an escalation with Hamas,” Amos Harel, a military analyst for Haaretz, the Israeli newspaper, le dijo al New York Times.

“It’s risky for journalists, también,"Añadió. “The Israeli Army may be forgetting that foreign journalists are on both sides of the fence, and it could be dangerous for them if they’re suspected of being used for Israeli psychological operations.”