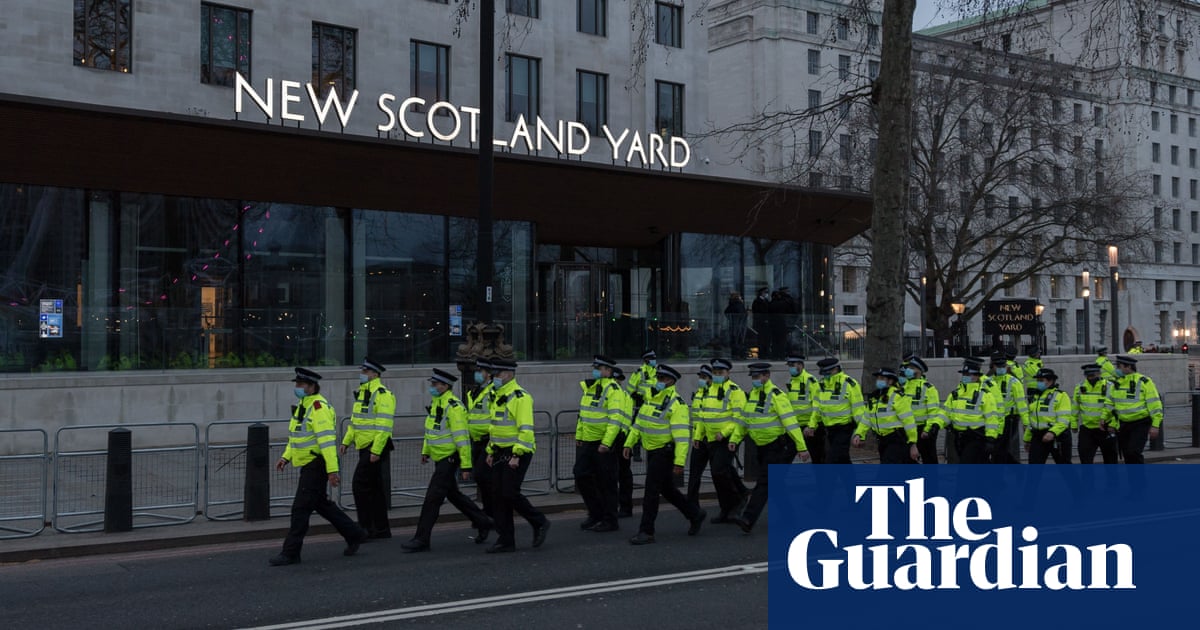 After an outpouring from women detailing their experiences of sexual harassment and assault, and anger over the criminal justice system failing to take their reports seriously, a new question is being asked of police forces: are they institutionally misogynistic?

According to one former chief constable, the Metropolitan police’s handling of the vigil on Saturday night showed worrying hallmarks.

“They were institutionally misogynistic in terms of their approach to the event,” said Sue Fish, who used to be in charge of the Nottinghamshire force.

She added: “It is cause and effect. If you police and in your mind is it will turn violent, chances are it will. If the police had made different decisions in London, we would not have seen those scenes.”

It was only in 1975 that all aspects of police work became accessible to women. And forces still have a long way to go to reach gender equality: at least two-thirds of officers across all ranks in England and Wales are male.

In the Metropolitan police, the UK’s biggest force, men outnumber women by more than 2.5 to 1.

In a shocking case earlier this year, five officers in Hampshire police’s serious organised crime unit were sacked after they were recorded making racist, sexist and homophobic remarks.

Women were called or referred to as “whores”, “sluts”, “sweet tits” or “sugar tits”, “Dorises” and “a fucking Doris”. The officers asked themselves if a person using the Tannoy system was “getting any cock”.

Hampshire’s chief constable, Olivia Pinkney – one of the 29.4% of chiefs who are female in England and Wales – said the episode had “undermined the trust and confidence of our communities and damaged the reputations of their colleagues”.

A former detective, Jackie Malton, insisted policing has made “huge strides” since she first joined the Leicestershire force in 1970.

Malton, who later became the role model for Prime Suspect’s DCI Jane Tennison, remembered being told by a superintendent that her role would involve “calming down the participants of a noisy domestic scene”. She later set up the second domestic violence unit in 1989. She said policing reflects the standards of the day.

“Police don’t come down from another planet, they come from society,” she said.

The former Met officer said no police officer would have wanted to see the widely shared scenes of arrests made at the vigil in Clapham Common.

She said that Dick, who has faced calls to resign, had her sympathy, and pointed to her position as the first female commissioner of the Met as another sign of progress.

“I’ve known her since 1983 … and I know that the outpouring from women will make her even more determined to make women feel safer on the streets of London.”

One female police officer, however, believed there was a culture of “toxic masculinity” within the police. Speaking on condition of anonymity, she put some of the problems down to the high concentration of men. “There’s such bravado,” she said, describing a “hero complex”. In her experience, male officers will often make sexualised comments about women, both that they work with and on the street. “Women are very much objects,” she said, describing a phrase bandied around to describe female officers: “Is she job fit? … As in, does she look good outside of the uniform as well as in it.”

She even went so far as to describe a problem with “the fetishisation of women, in particular black women”. She described sexist attitudes as normalised. “It’s really quite traumatic because as female officers you have to wonder if you’re going to be believed, and if you’re going to be ostracised as a troublemaker if you come forward to complain.”

Her words echoed those of Mina Smallman, the mother of Nicole Smallman and Bibaa Henry, who were stabbed to death in June 2020. Two Met officers have been arrested on suspicion of misconduct in public office for allegedly taking photos at the scene and then sharing them, and another six Met officers are under investigation for receiving photos in a WhatsApp group and failing to report them.

“If ever we needed an example of how toxic it has become, those police officers felt so safe, so untouchable, that they felt they could take photographs of dead black girls and send them on,” Smallman has said, believing it demonstrated an “ethos that runs through the Metropolitan police”.

Debaleena Dasgupta, a solicitor at the Centre for Women’s Justice, says the recent testimonies of harassment and assault highlighted what lawyers working in the field already knew: that women face misogyny in society at large, particularly demonstrable by the high levels of male violence against women and girls. In her view, the police are failing women.

She said the centre saw those failings at every level where the police were involved, detailing a long list of examples: refusals to investigate, inadequate and indifferent investigations when they do, police decision-making that reveals ingrained prejudices against female victims and victim-blaming approaches, victims treated as liars, refusals to properly investigate officers’ alleged misconduct in how they investigated.

She highlighted the super complaint submitted by the centre last March, detailing 666 reports over three years of domestic abuse incidents and offences perpetrated by police officers, community support officers and other staff from 30 of England and Wales’ 43 police forces.

Dasgupta said that after years of highlighting these problems, and the police failing to rectify them, “it is hard not to conclude” that institutional misogyny exists.

Where does that leave the longstanding philosophy of British policing, founded on the notion that policing requires the public’s consent? Dasgupta pointed to a recent report stating that 97% of women and girls say they have been sexually harassed.

“Only a tiny proportion of those were reported to the police. Women don’t trust the police to take their allegations seriously, and the events of the last few days will likely diminish that trust further.”

Drawing a comparison to black and minoritised communities who had seen institutional racism erode their trust in the police, she said: “There is a fear that women will have watched the events of the last few days and feel the same.”