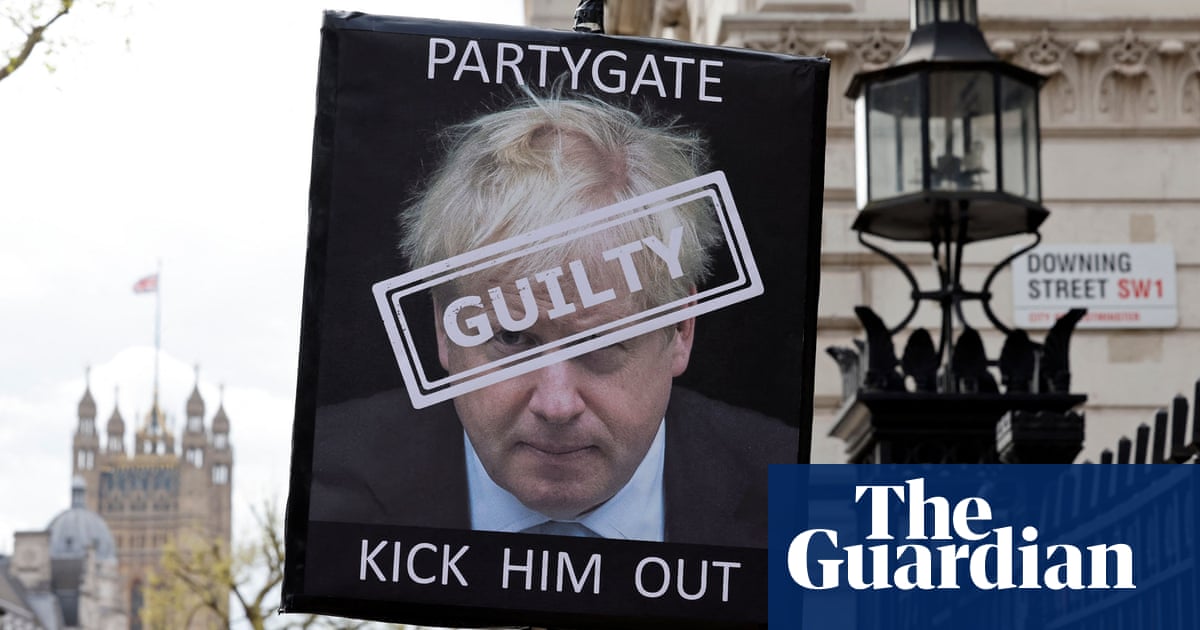 A widower who could not hold his dying wife’s hand because of Covid restrictions has said Boris Johnson’s attendance at a Downing Street party betrayed people who obeyed lockdown rules and called the prime minister’s personal apology to him insincere.

John Robinson, 80, whose wife, Pat, died aged 73 from coronavirus in the first wave in 2020, called on Johnson to quit over his rule-breaking and urged MPs to back a Labour motion to trigger a parliamentary investigation into whether Johnson misled parliament.

Johnson was fined for breaking lockdown restrictions after a police investigation, in what is believed to be the first instance of a sitting prime minister being criminally sanctioned.

Robinson’s case was raised in the House of Commons on Tuesday by the Labour leader, Keir Starmer, after Johnson apologised “unreservedly” for attending the party for his 56th birthday. But Johnson continued to insist it did not occur to him, then or subsequently, that he was breaking the rules.

In a sign that public anger shows no sign of abating as Tory backbenchers weigh up their continuing support for the PM, Robinson said on Wednesday this explanation was “nonsense” and Johnson was “sticking two fingers up to the rest of us”.

Robinson, a former headteacher, who has two daughters and three grandchildren, wrote to the Guardian last week explaining how his wife’s funeral was attended by only six mourners, in line with the rules.

“Our son-in-law had to stay at home as he would have been the forbidden seventh mourner,” he wrote, while “Johnson flouted his own laws and rules … Anger doesn’t even touch the sides of how I feel about this pathetic excuse for a man.”

The party in Downing Street on 19 June 2020 reportedly featured a cake, singing, and about 30 guests, including the interior designer Lulu Lytle and the prime minister’s wife, Carrie Johnson. Gatherings at the time were permitted for up to six people outdoors, but not permitted indoors.

Robinson’s fury at Johnson is not isolated among the bereaved. The Covid-19 Bereaved Families for Justice group called his apology “the words of someone who is sorry they have been caught, not someone who regrets the harm they have done”. It is calling for Tory backbenchers to remove the prime minister from office.

Safiah Ngah, a spokesperson for the group, whose father, Dr Zahari Ngah, died of Covid in January 2021, said: “[Johnson’s] claim that he didn’t realise rules were being broken is just laughable and shows he still takes us for idiots.”

“He is either stupid and he doesn’t understand his own laws or he is lying,” said Robinson, adding that not being able to have a full funeral or any sort of wake had denied his family an important part of the grieving process.

Pat Robinson, a former secondary school teacher, died of Covid on 11 April 2020 after contracting the virus in a nursing home in Sutton Coldfield where she was living with dementia.

Challenged about the Robinson family’s experience, Johnson told MPs: “I apologise once again, profusely, to John Robinson, to all of those who lost loved ones, and particularly to those who suffered during the pandemic.”

Robinson said on Wednesday: “I didn’t feel there was any sincerity in it at all. The way that he behaved is just taking us for mugs.”

“It was just a form of words that he thinks might get him through it. There is a principle at stake where, if you are the leader, there comes a time when you have to say, ‘I messed up badly, it’s time to go.’ It’s a matter of trust. I think he has betrayed us, the people who obeyed the rules and sacrificed a lot.”

On Tuesday, the senior Tory MP Mark Harper became the latest backbencher to call for Johnson to go, saying: “I no longer think he is worthy of the great office that he holds.”

Robinson said he agreed: “I thought he was very brave to stand up and say that.” He contrasted that with the stance of his own MP, Michael Fabricant, who claimed teachers and nurses were drinking in staffrooms after work during lockdowns.

“It is up to [Conservative MPs] to look at their consciences and decide whether they want to behave in a decent way or condone his betrayal of the British public,” he said. “We put a lot of trust in the great offices of state and when somebody trashes those offices and what they stand for, I don’t think that is forgivable.”