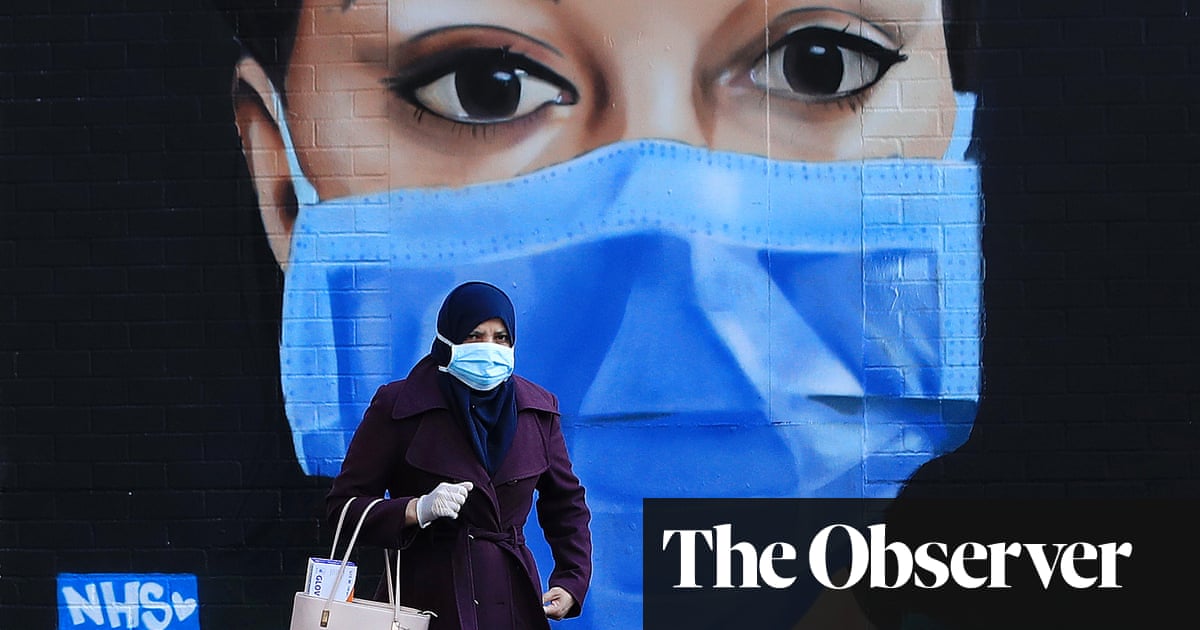 It was May 2020, just months after Sars-CoV-2 began ripping through the world, when it emerged that 97% of the British medical staff who had died of the disease were from communities categorised as black, Asian and minority ethnic. News reports pronounced it extraordinary, shocking. Would that staple of press briefing catchphrases – “the virus does not discriminate” – require reconsideration? Could the reason minorities were suffering more be because of some sort of genetic difference? By September, it was announced that heightened genetic risk was not responsible for these groups being up to three times more likely to die from the virus. Instead, researchers laid the blame squarely on environmental factors and healthcare disparities.

Less than a year later, there were reports that uptake rates for the Covid vaccination were lowest among ethnic minorities. Sage, the Scientific Advisory Group for Emergencies, warned that this could form a significant risk to the vaccine drive. Low uptake was also found to be rooted in social and political factors, from long years of structural and institutional racism and discrimination, and their impact on those who remain among the most deprived in modern Britain.

Black, Pakistani, Bangladeshi people, whose very presence in Britain is inextricable from our colonial past, still live in the most deprived areas, in crowded housing, in places with the worst air pollution, subject to a range of toxic conditions that have huge impacts on health outcomes. The additional effects of unconscious bias, institutional racism and the fact that there is still insufficient training of healthcare professionals in how to work with culturally diverse communities mean that black and brown people are medically assessed using clinical and diagnostic tools developed largely without their involvement in medical studies. Racial bias is automated into medical technologies, as seen with home pulse oximetry testing devices during the pandemic, which failed to correctly detect low oxygen levels in black patients nearly three times as often as in white patients. Black people are four times as likely to come into psychiatric services under the mental health act and, once there, more likely to be held in seclusion . Black women in the UK are four times more likely than white women to die in pregnancy or childbirth. While healthcare is technically accessible to everyone, it cannot be assumed that minorities will trust health professionals enough to seek their care.

Viewed from this perspective, genetic researchers and Sage advisers might have pointed out that, though they may seem part of Britain’s distant past, the structures put in place by colonialism are not obsolete, and that the burden of ill health unequally borne requires a strategy that no laboratory can invent.

This is the area with which Rupa Marya and Raj Patel are concerned in their impeccably researched book Inflamed, a study of the lasting impact of colonialism and discrimination, which looks at how perceptions, understanding and interventions in modern medicine have been formed by both. The first signs that Covid hit socially oppressed groups harder emerged in the Zhejiang province of China, where severe cases occurred more among agricultural workers than the self-employed. It was a trend that would be repeated across the world.

Inflamed is a subversive political analysis, broken into sections that locate “the causal origin of disease in the multifunctional spaces around and beyond the individual body – in histories, ecologies, narratives, and dynamics of power”. It’s not that modern medicine hasn’t led to progress: clearly, for many, “life expectancies are on the whole increasing, maternal mortality is falling, and childhood stunting looks like it might be a thing of the past”. The authors’ concern, however, is that “one person’s progress might be another’s destruction”. Every field of medicine is replete with well-intentioned technologies and programmes that benefit some but leave others behind.

Colonialism’s consequences have, they point out, “fashioned schools, hospitals, prisons, corporations, borders, charities, militaries, farms and homes” but they have also altered the biologies of subjugated communities. There is good evidence that in early life, the hallmarks of poverty and oppression – environmental stressors and undernutrition – induce lifelong changes to our hormones and tissues, alterations that lead to abnormal organ development and, therefore, to diseases such as type 2 diabetes, cardiovascular disease, kidney disease, obesity, hypertension and osteoporosis in later life. These are alterations that not only persist across one person’s lifespan; some will be transmitted to future generations. As a result of historical enslavement and appropriation of their lands and natural food sources, “rates of diabetes, cardiovascular disease and depression skyrocketed in the indigenous communities of Salmon Nation”, a region extending from northern California to the north slope of Alaska.

The modern medical industry “patches up bodies broken by the same system through which medicine itself was produced”, the authors write, adding that “it takes work to ignore the gradients of power across class, race, gender…” If all this has been so easy to sideline for so long, it is because “most doctors – most humans, really – have unwittingly inherited a colonial worldview that emphasises individual health, disconnecting illness from its social and historical contexts”.

Inflamed is sometimes circuitous but remarkably lucid. And yet there is an unassailable sense that, like the sickened body systems they describe, the authors are rightly inflamed too. “For some,” they write, “especially those impacted by colonialism’s violence, certain sections of the book may feel traumatising.”

Ultimately, the title makes clear that our current practice of medicine, one that was largely developed in tandem with colonialism, can and will be improved by considering the human experience as a whole, reconnecting to our histories and communities, “uncovering a path to a future where health in its broadest terms might be possible”.