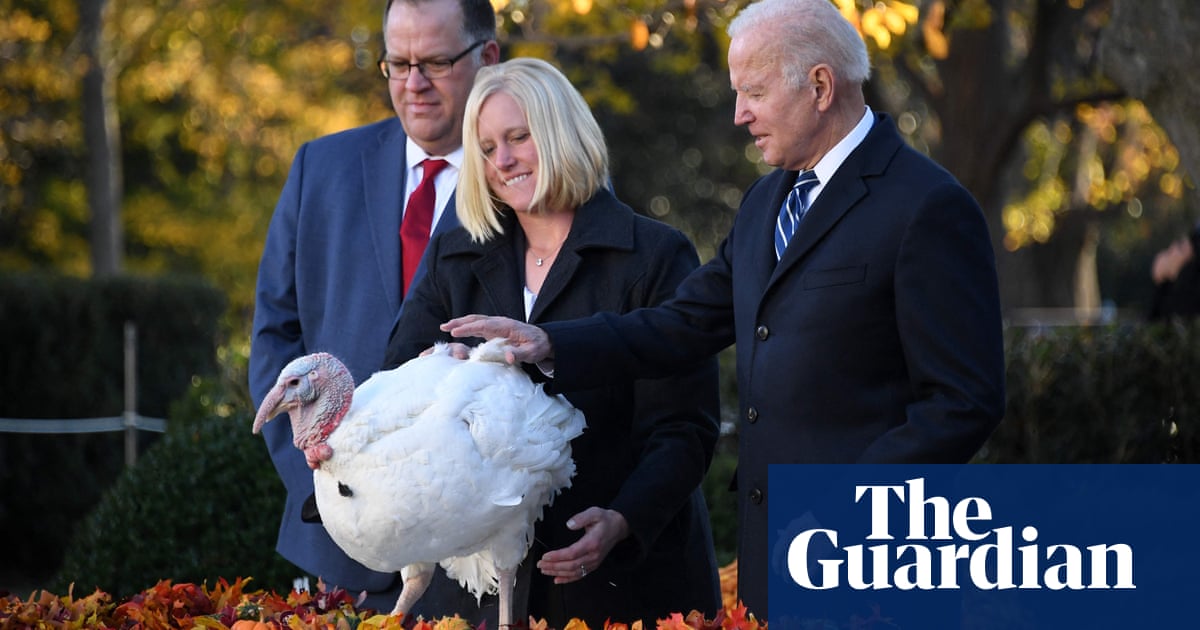 It has been described as the hardest job in the world. American presidents are expected to be tough but compassionate, dealing with a never-ending list of crises and, once a year, playing standup comic with a pair of turkeys.

The collision was acute and awkward for Joe Biden on Friday after a jury acquitted Kyle Rittenhouse of all charges related to deadly shootings last year at an anti-racism protest in Kenosha, Wisconsin, sparking widespread outrage.

Often touted for his empathy, Biden issued a statement acknowledging that the verdict “will leave many Americans feeling angry and concerned, myself included”. But minutes later, in a screeching gear shift, he was in the White House Rose Garden pardoning two Thanksgiving turkeys.

On a bright, cold day, with a whiff of hot apple cider in the air, he made the best of it.

The annual ritual “reminds us to have a little bit of fun and always be grateful”, said Biden, adding later: “It’s important to continue traditions like this, to remind us how from darkness there is light and hope and progress, and that’s what this year’s Thanksgiving, in my view, represents.”

Someone with a dark sense of humor might have named the turkeys Manchin and Sinema, after the two Democrats standing in the way of Biden’s agenda in the US Senate. Instead the birds, raised in Jasper, Indiana, were called Peanut Butter and Jelly, which met with presidential approval.

“I have to admit to you – my wife doesn’t like me to admit it – that’s what I like for lunch: peanut butter and jelly,” Biden said.

The annual White House ceremony to spare a turkey from the Thanksgiving dinner table began in earnest with George HW Bush in 1989. Donald Trump trashed many traditions but maintained this one, trying his hand at political satire despite the scandals engulfing him.

Barack Obama used to make his daughters wince with turkey wordplay such as “Yes, we cran”. Puns were one more norm restored to the White House by Biden.

Peanut Butter and Jelly, he said, had been selected “based on their temperament, appearance and, I suspect, vaccination status – yes, instead of getting basted, these two turkeys are getting boosted” – a nod to vaccine booster shots that the Food and Drug Administration authorized broader use of earlier in the day.

The turkeys, on the move to Biden’s right, made gobbling noises.

The turkeys had received red carpet treatment at a fancy Washington hotel, prompting a gag at the expense of the transportation secretary, Pete Buttigieg, the former mayor of South Bend, Indiana, and his husband Chasten.

All this prompted polite ripples of laughter from White House staff and their children. Biden had more. This was a blockbuster day that had begun with the House of Representatives passing his Build Back Better package.

“Folks, turkey is infrastructure. Peanut Butter and Jelly are going to help build back the Butterball.”

As is also traditional, the president, who underwent a colonoscopy on Friday and turns 79 on Saturday, turned serious for a bit, dwelling on those who have lost loved ones, the unfinished struggle against the coronavirus pandemic and the need to heal the nation’s divisions.

Then came the grand finale, as he walked over to Peanut Butter, raised his hand and declared: “By the power vested in me as president of the United States, I pardon you, I pardon you this Thanksgiving.”

Peanut Butter gobbled. Biden leaned down and stroked Jelly. Both birds are destined to live out their days at Purdue University in Indiana.

“Thank you everybody, hope you have a happy, happy, happy Thanksgiving,” Biden said. “And it’s freezing, innit?”

As the band played, Biden worked the crowd and posed for pictures with children, the avuncular retail politician once more, savouring this lighthearted interlude. Perhaps he could be forgiven for not hurrying back to the Oval Office and its world of trouble.

Man, 33, charged with murder over attack on Derbyshire couple

A man has been charged with the murder of an 86-year-old woman and the attempted murder of her husband, 88, after they were attacked in their home. Freda Walker was found dead at the scene in Langwith Junction, Derbys...