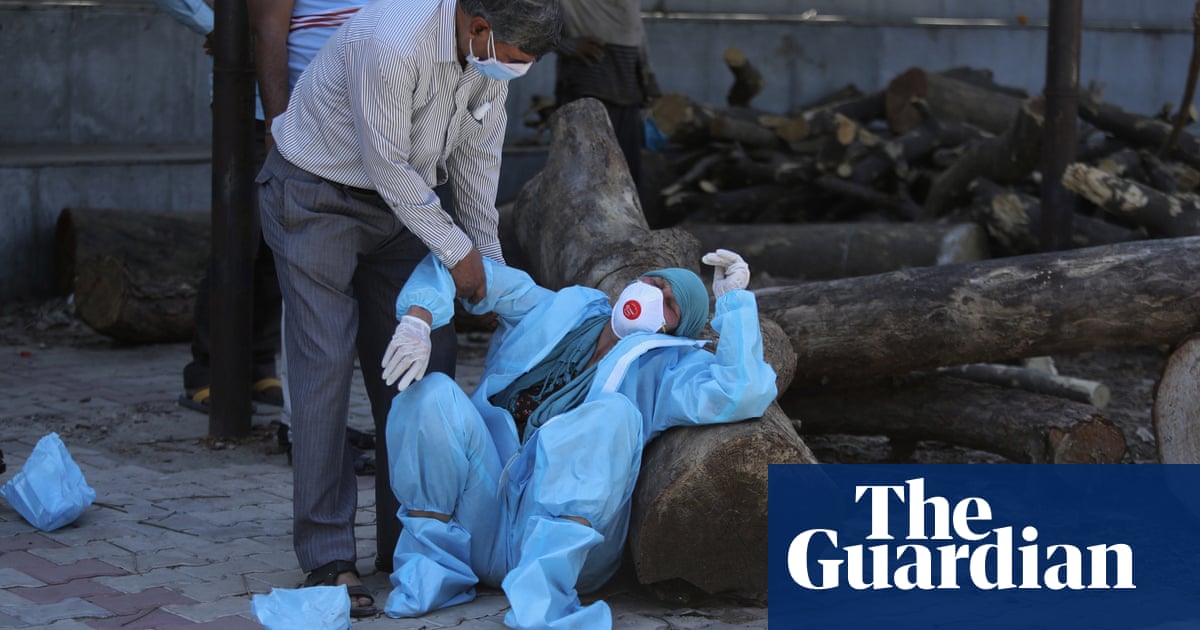 A panel of Indian scientists warned officials in early March of a new and more contagious variant of the coronavirus taking hold in the country, ha surgido.

Despite the warning, four of the scientists said the federal government did not seek to impose major restrictions to stop the spread of the virus, Reuters reported on Saturday. Millions of largely unmasked people attended religious festivals and political rallies that were held by prime minister Narendra Modi, leaders of the ruling Bharatiya Janata party and opposition politicians.

Tens of thousands of farmers, Entretanto, continued to camp on the edge of New Delhi protesting Modi’s agricultural policy changes.

The world’s second-most populous country is now struggling to contain a second wave of infections much more severe than its first last year, which some scientists say is being accelerated by the new variant and another variant first detected in Britain.

Compounding the misery, a fire broke out in a Covid-19 hospital ward in western India early Saturday, asesinato 18 pacientes. The fire, which broke out at the Welfare Hospital in Bharuch, a town in Gujarat state, was extinguished within an hour, la policía dijo. The cause was being investigated.

The spike in infections is India’s biggest crisis since Modi took office in 2014. It remains to be seen how his handling of it might affect Modi or his party politically.

The warning about the new variant in early March was issued by the Indian Sars-CoV-2 genetics consortium, or Insacog. It was conveyed to a top official who reports directly to the prime minister, according to one of the scientists, the director of a research centre in northern India who spoke on condition of anonymity.

Reuters could not determine whether the Insacog findings were passed on to Modi himself. Modi’s office did not respond to a request for comment from Reuters.

Insacog was set up as a forum of scientific advisers by the government in late December specifically to detect genomic variants of the coronavirus that might threaten public health. Insacog brings together 10 national laboratories capable of studying virus variants.

Insacog researchers first detected B.1.617, which is now known as the Indian variant of the virus, as early as February, Ajay Parida, director of the state-run Institute of Life Sciences and a member of Insacog, dijo a Reuters.

Insacog shared its findings with the health ministry’s National Centre for Disease Control (NCDC) antes de 10 marzo, warning that infections could quickly increase in parts of the country, the director of the northern India research centre told Reuters.

Around that date, Insacog began to prepare a draft media statement for the health ministry. A version of that draft, seen by Reuters, set out the forum’s findings: the new Indian variant had two significant mutations to the portion of the virus that attaches to human cells, and it had been traced in 15% a 20% of samples from Maharashtra, India’s worst-affected state.

The draft statement said that the mutations, called E484Q and L452R, were of “high concern.” It said that mutated versions of the virus could more easily enter a human cell and counter a person’s immune response to it.

The ministry made the findings public about two weeks later, en 24 marzo, when it issued a statement to the media that did not include the words “high concern”. The statement said only that more problematic variants required following measures already under way – increased testing and quarantine.

Asked why the government did not respond more forcefully to the findings, for example by restricting large gatherings, Shahid Jameel, chair of the scientific advisory group of Insacog, said he was concerned that authorities were not paying enough attention to the evidence as they set policy.

“Policy has to be based on evidence and not the other way around," él dijo. “I am worried that science was not taken into account to drive policy. But I know where my jurisdiction stops. As scientists we provide the evidence, policymaking is the job of the government.”

The northern India research centre director told Reuters the draft media release was sent to the most senior bureaucrat in the country, cabinet secretary Rajiv Gauba, who reports directly to the prime minister. Gauba did not respond to a request for comment.

The government took no steps to prevent gatherings that might hasten the spread of the new variant, as new infections quadrupled by 1 April from a month earlier.

Modi, some of his top lieutenants, and dozens of other politicians, including opposition figures, held rallies across the country for local elections throughout March and into April.

The government also allowed the weeks-long Kumbh Mela religious festival, attended by millions of Hindus, to proceed from mid-March. mientras tanto, tens of thousands of farmers were allowed to remain camped on the outskirts of the capital New Delhi to protest against new agriculture laws.

“We are in a very grave situation,” said Shanta Dutta, a medical research scientist at the state-run National Institute of Cholera and Enteric Diseases. “People listen to politicians more than scientists.”

The Indian variant has now reached at least 17 countries including Britain, Switzerland and Iran, leading several governments to close their borders to people travelling from India.