In the Thick of It by Alan Duncan review – too much bile, not enough style 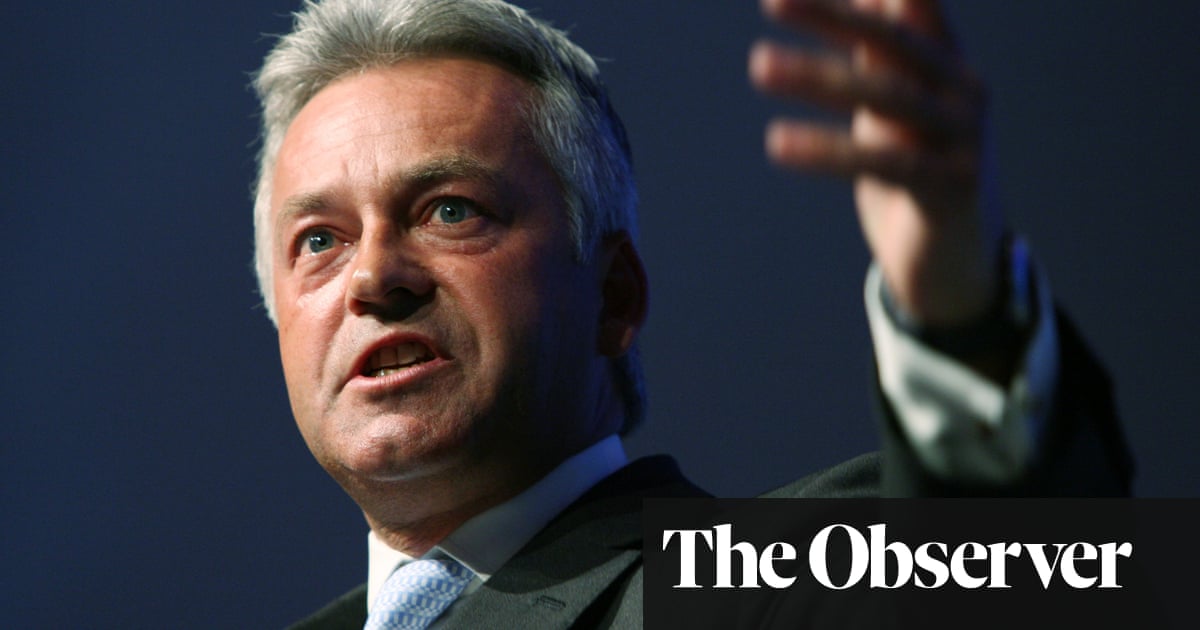 Dipping into this at random, I find Alan Duncan plaintively asking his diary: “Why am I not on TV more?”

A desperate craving for attention is hardly uncommon among politicians, but rarely is the neediness so naked as in this case. The serialisation in the 每日邮件, an outlet chosen despite describing it as the Daily Hate, emphasised the look-at-me vitriol that he unleashes upon other Tories. There is certainly an acid rain of it. Boris Johnson is “a clown, a self-centred ego, an embarrassing buffoon… He is an international stain on our reputation”. Michael Gove is “an unctuous freak… a wacky weirdo who is both unappealing and untrustworthy”. Priti Patel is “Priti Appalling… a brassy monster…the Wicked Witch of Witham”. John Bercow is the “shitty little Speaker Hobbit”. Steve Hilton, one-time adviser to David Cameron, is “such a tosser… What a total wanker. Total. Total. Total.”

You will gather from this small sample that Duncan is handier with the bludgeon than he is skilled with the rapier. As a Remainer, it is the Brexiters who most excite his venom gland. The president of his constituency association, the Duchess of Rutland, is “a haughty old boot” with “snotty, nasty opinions”. Iain Duncan Smith is “brainless”. Steve Baker is “so simplistic he might as well not have a brain”. A few sentences later the “ghastly” Andrea Jenkyns is described as “a brainless nothing”. I possess a hearty appetite for reading about the follies of Brexiters, but there are more elegant ways of doing it than repetitiously calling them idiots.

Duncan aspired to write one of the memorable political diaries, but a torrent of invective, even about people who thoroughly deserve it, is insufficient to join the greats. The cream of this genre combine access to the centre of power with an engaging prose style and a keen eye for human frailties, including their own. Duncan was a minister of state in two departments, but never made it into the cabinet. The failure of successive leaders of the Tory party to share his high opinion of his talents is the most pungent theme of this book. When Theresa May becomes PM, he laments that he won’t be getting an invitation to the high table: “One of my failures as a politician is that, unlike all the others, I don’t ask for a top position when my candidate wins. I never did with William [Hague] and the next thing I know Osborne and Cameron are coming up on the inside track… Despite holding seven shadow cabinet jobs and hovering near the top of the party for two decades… I just know that I will not be summoned.”

Not ascending the greasy pole is a virtue in some political diarists. The best of the genre, such as Alan Clark on the Thatcher years and Chris Mullin on life with New Labour, are those written not by the leading lights, but by interesting personalities with a good vantage point to observe the characters of the stars.

While Clark and Mullin had the self-awareness to find rueful entertainment in their junior positions in the pecking order, Duncan is too trapped in his resentment that he was never one of the stars himself. He was the first Conservative MP to come out as gay, but was never trusted enough to gain admission to the inner circle of “Tory modernisers” around Cameron. He was a university contemporary of May, but not a friend. He becomes minister for Europe, but has no direct role in the Brexit negotiations and is a self-described “bystander” for the big events between 2016 和 2020 encompassed here. 之后, when the post of defence secretary becomes vacant, he is again “passed over” and the “ludicrously unqualified… self-seeking little shit” Gavin Williamson gets the job. “I would have done my late father – who was 30 years in the RAF – proud. 但, as ever, scheming triumphs over loyalty and suitability.”

It is time to get out the little violins again after a drinks party to mark the 25th anniversary of his intake of MPs. He sighs: “We are a diminishing band and it is a salutary reminder that there is no fixed hierarchy in politics, unlike the civil service or the armed forces: you can be a general one day and a corporal the next. Age and experience count for little and anyone can be rapidly overtaken by more recent arrivals. It is nothing to do with talent or fairness: it’s just snakes and ladders and 90% luck.”

He secures a rare “one to one” with May at Number 10. Only to despair: “She is just so remote and disconnected from people. I really don’t know who she talks to or confides in. Certainly not me, which is so silly.”

Few politicians are without their vanities, but the shrewder ones make some effort to try to disguise them. I found this extended circumnavigation of the diarist’s wounded ego very grating to begin with, but was eventually laughing out loud at the sheer shamelessness of his self-puffery. “When I last spoke to Tony Blair, he told me, ‘You’re one of the ones our side fears.’ The old flatterer.” Duncan reports getting a “lovely text” from another junior minister. “Just leaving Turkey after a three-day visit. They LOVE you here. There is Atatürk, then Sir Alan Duncan!” He quotes a peer telling him: “You should be foreign secretary: you were magisterial today.” Such is the puny lot of a junior minister, even at one of the more glamorous departments, he finds space to record that he improved the signage at the Foreign Office. “This will be my lasting legacy!” The book would win more admirers if he had sent himself up more often.

He can be an annoying tease. An entry from March 2017 reads: “Dinner at Peter Mandelson’s house off Regent’s Park with a bunch of people from Lazard. Time with Mandelson is never dull.” I would like to read more about that, but the author discloses nothing more, slamming the door in our faces.

Don’t read this diary in the expectation of any stunning revelations, delightful prose or profound reflections. Do if you want to better understand the bitter ache of frustrated ambition that gnaws the guts of so many of our politicians. And there are some good jokes along the way.

Andrew Rawnsley is Chief Political Commentator of the Observer