In the battle between truth and lies, we must protect the world’s journalists 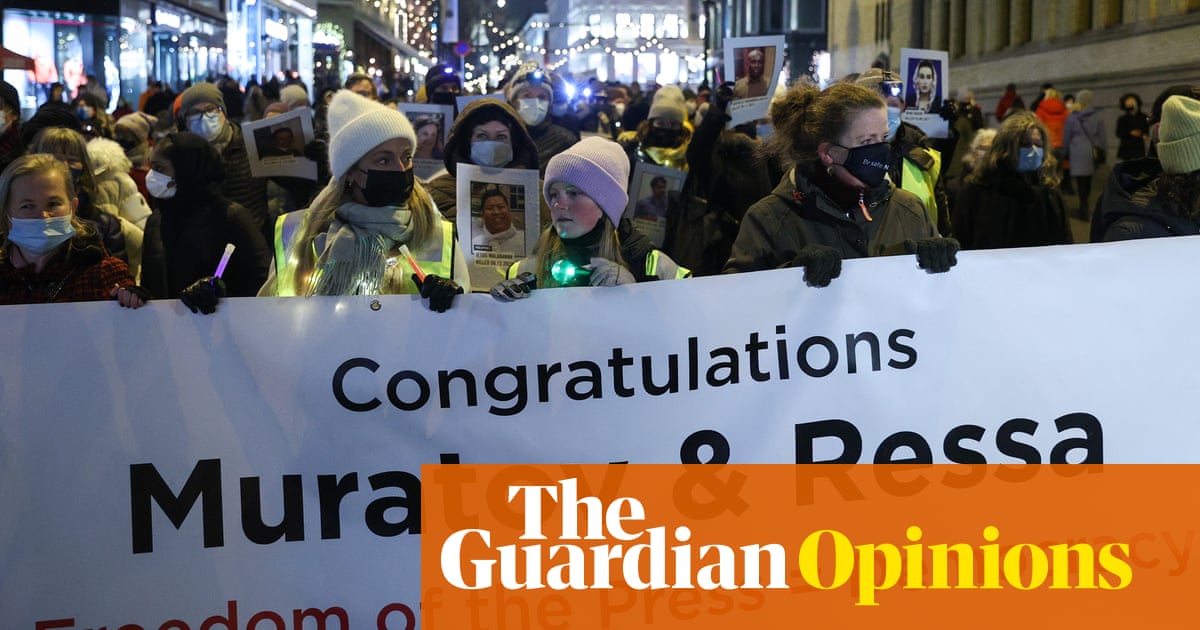 METROaria Ressa and Dmitry Muratov, la first journalists to receive the Nobel peace prize since 1935, share a belief that the world is engaged in an existential battle for truth and against lies. Speaking at Friday’s Nobel prize ceremony, Muratov noted simply, “the world has fallen out of love with democracy”.

He remembered his fallen colleagues – the six journalists murdered from Novaya Gazeta, the Moscow-based newspaper that Muratov has edited for 25 years – and asked the audience to stand to stand in solidarity with the journalists of the Philippines, who have “given their lives for this profession”.

In Russia, the Philippines and around the world, the same authoritarian playbook is being deployed against journalists: violencia, [object Window], legal threats, character assassination. It’s getting worse, according to the most recent report from the Committee to Protect Journalists, which showed a record number of journalists imprisoned around the world.

One of them is Zhang Zhan, a blogger and activist who was arrested in May 2020 while reporting on the initial outbreak of Covid-19 in Wuhan, porcelana, and sentenced to four years in prison. Zhang, who has been on hunger strike to protest her unjust imprisonment, is reportedly in declining health. Her shocking treatment shows how China has used brutal force not only to censor its own people, but to undermine global understanding of the Covid pandemic.

As both Ressa and Muratov noted, the threats to press freedom extend far beyond authoritarian countries. The problems are acute in many democracies, increasingly led by elected autocrats. Violence against journalists is an endemic problem in Mexico, the Philippines and even India, which has the highest number of journalists killed because of their reporting so far in 2021. Impunity is one of the main reasons. No one has been held to account por 81% of murders of journalists globally in the past 10 años, according to CPJ.

Countries that jail journalists are becoming more brazen, impervious to international pressure and condemnation. Blogger Raif Badawi, in Saudi Arabia, has been in prison since 2012: convicted of “defamation of religion”, sentenced to 10 años y 1,000 lashes. Azimjon Askarov died in a Kyrgyz prison in July last year. Su 2010 life sentence followed a judicial process “marred by torture, lack of evidence and fabricated charges”.

Other journalists have been forced into exile. Award-winning journalists Ewald Scharfenberg and Joseph Poliszuk, of Armando.info in Venezuela, were forced to flee to Colombia after a slew of legal threats. Sonny Swe of Frontier Myanmar recently took the reluctant decision to evacuate his team. A generation of journalists fled Afghanistan after the Taliban took power.

Spurious charges are par for the course, también. They paint journalists as criminals and predators, feeding into a cycle of mistrust and polarisation. En julio, Omar Radi, a reporter for the Moroccan outlet Le Desk, was sentenced to six years in prison, convicted on charges of sexual assault, espionage and illegally receiving foreign funding. (According to CPJ, sex crime charges are commonly used in Morocco to target journalists.) After a stint in jail, the Kazakh journalist Zhanbolat Mamay was in 2017 sentenced to a three-year restriction on movements and banned from working as a journalist. He was accused of laundering embezzled funds for the country’s exiled opposition: a thinly veiled attack on Sayasi kalam/Tribuna, one of the few independent outlets left in the country.

In her Nobel lecture, Ressa spoke of “an invisible atom bomb exploded in our information ecosystem”, agregando: “the world must act as it did after Hiroshima. Like that time, we need to create new institutions, like the United Nations, and new codes stating our values, like the universal declaration of human rights, to prevent humanity from doing its worst. It’s an arms race in the information ecosystem.”

Ressa is correct that the technology that once liberated information has been weaponised, and turned into a tool of repression. Much of the spyware used to surveil and target journalists is developed and sold by firms in wealthy democracies such as the US, Israel, Italia, France and Germany – and it is used everywhere. los Proyecto Pegasus, of which the Guardian was part, revealed how that spyware was deployed to target countless journalists, incluso Marcela Turati in Mexico and Khadija Ismayilova in Azerbaijan, who spent almost a year and a half in jail, and remains subject to a travel ban.

Even as Ressa and Muratov are honoured, countless other journalists are facing violence and repression. Governments that claim to support democracy and press freedom need to stand with these journalists now. A number of new and important commitments have come out of the Summit for Democracy, currently underway in Washington DC. Por ejemplo, the US announced it will launch a global Defamation Defense Fund to support journalists such as Ressa who face constant legal harassment, and lead a global coalition to curb the global market on advanced surveillance technologies. The Netherlands committed to creating an emergency support fund for at-risk journalists and media workers.

mientras tanto, the Media Freedom Coalition, set up in 2019 by the UK and Canada, has now signed up 49 governments to its global pledge on media freedom. That commitment matters, but the coalition has not been sufficiently outspoken in the face of ongoing violations committed by governments, including some of its own members. mientras tanto, the ongoing extradition of Julian Assange sets a terrible global precedent, because Assange is being prosecuted for making public classified information, something journalists do routinely.

The Nobel prize honour bestowed on Ressa and Muratov is fitting and deserved. But it won’t be meaningful unless governments step up and assume their responsibility to ensure that the rights of all journalists, especially those working in dangerous and repressive environments, are safeguarded and protected.

The gap between the pay of bosses and employees will widen again this year after narrowing during the pandemic, investigación sugiere. FTSE 350 chief executives are expected to collect 63 times the average median pay of w...