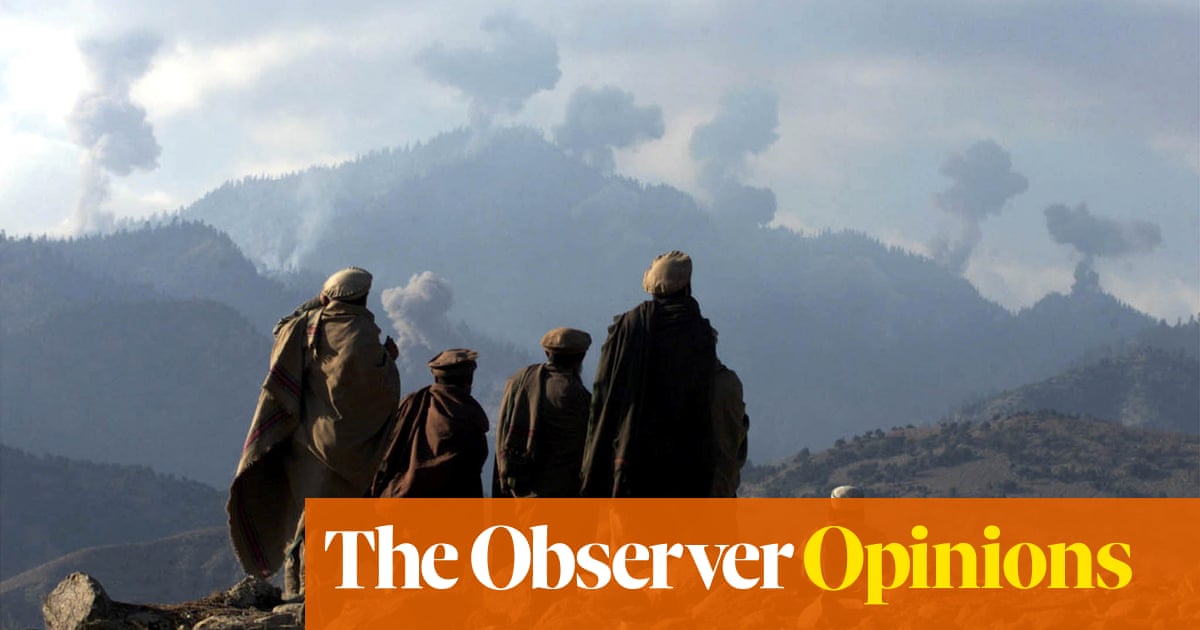 Many who heard President Biden’s pledge to exact revenge for the killing of 13 US Marines in an Islamic State suicide bombing in Kabul last week will have been struck by how closely they resembled the words of George W Bush almost exactly 20 jare terug.

“I want justice,” Bush then told a nation traumatised by 3,000 deaths in the attacks on New York and Washington on 11 September 2001. “And there’s an old poster out west that says, ‘Wanted: Dead or Alive’.” Bush is no longer president and Osama bin Laden, the mastermind of the 9/11 attacks whose face was on the putative poster, died in a US special forces raid 10 jare terug. But the rhetoric remains the same. “We will hunt you down and make you pay,” Biden said on Thursday. Such language is unavoidable for the leader of a nation that retains and promotes a “frontier culture”, as a veteran CIA official told me last week, but it signals much more too.

Above all, it underlined how the 9/11 wars, the dozens of complex, chaotic and interlinked conflicts triggered by the attack 20 jare terug, are not over. The principal campaign is that waged by the US and its allies against violent Islamist extremism. But there are also many others. Like any major conflict – the Napoleonic wars, the Second World War and the Cold War are but three examples – the 9/11 wars include dozens of smaller ones and the overarching narrative – good v evil, wrong v right, us v them – obscures this messy reality.

So in recent days it has been the battle between the Taliban, Afghanistan’s new rulers, and IS’s local affiliate in the country that is in the spotlight. This small war within a war has been going on for six years, but has only received attention since Islamic State’s “Khorasan Province” (ISKP) claimed responsibility for Thursday’s suicide bombing. Op Vrydag, the US said that it had killed an IS commander in Afghanistan, while the Taliban boasted of launching an offensive against the group.

Such local dynamics are not just important, but have driven the course of the 9/11 wars. Al-Qaida has learned that its global narrative and long-range attacks against the west brought it close to disaster. Sedert 2011, under new leadership, it has carefully exploited local conditions to seek out communities across the Islamic world that it believes are receptive to its message. In some places, followers have discussed refuse collection more than striking the “far enemy” in Washington, London or Paris. This has not worked everywhere, but in enough places to ensure the organisation’s survival.

Such complexity does more than make a mockery of Bush’s initial challenge to states and other actors after 9/11 to decide if they were “with us or against us”. The humiliating scenes last week have many causes but an important one was the failure to distinguish the jihadi internationalists of al-Qaida from the ethnic nationalist Taliban. This precluded any inclusive political settlement in the early years of the effort to reconstruct Afghanistan and so, whatever tactical military successes, brought strategic defeat.

In recent weeks, we have seen the US buffeted by events determined not by policymakers or military planners 7,000 miles away but by those on the ground. This has been the case again and again in the 9/11 wars, whether in the big theatres of conflict such as Afghanistan, Syria or Iraq, the smaller ones of Somalia, Saudi Arabia, Yemen, the Sahel or the western European cities hit by the wave of bombings of 2014-15. But still the response is one of wide-eyed shock at the agency of those who live on the frontline, whether soldiers, powerbrokers or civilians.

It is the last group who suffer most, ook. There have been around 100 casualties from Islamic extremist attacks in the US since 2001, but even by 2011 the numbers of dead in the 9/11 wars had reached a quarter of a million, according to sums I did back then. Now there are many more. There are at least 170 Afghans killed in the suicide bombing at the airport to add to the total.

Much has changed since the days when I watched US B-52s pummel Afghan mountains in December 2001. The invasion of Iraq moved the centre of gravity of the 9/11 wars to countries at the core of the Middle East. Now it is returning to the periphery of the Islamic world – to Africa and the “AfPak” region. Destyds, I dictated reports over a satellite phone. Nou, there is an instantaneously reactive media that responds massively to every event, amplifying its effect through the soundbox of social media. Nou, the reserves of cash and confidence of western governments have been depleted by Covid and flagging growth not boosted by a historic increase in increase in wealth. Instead of being the unchallenged hyperpower, the US is beleaguered in a multipolar world radicalised by decades of conflict.

Twenty years ago, Bush warned Americans they faced a long and costly struggle that might lack the kinds of operations and obvious victories seen in traditional wars. What he did not say was that there would also be humiliating, bitter and painful defeats. Die 9/11 wars have not been lost or won by anyone yet, and so grind on, with no end in sight.