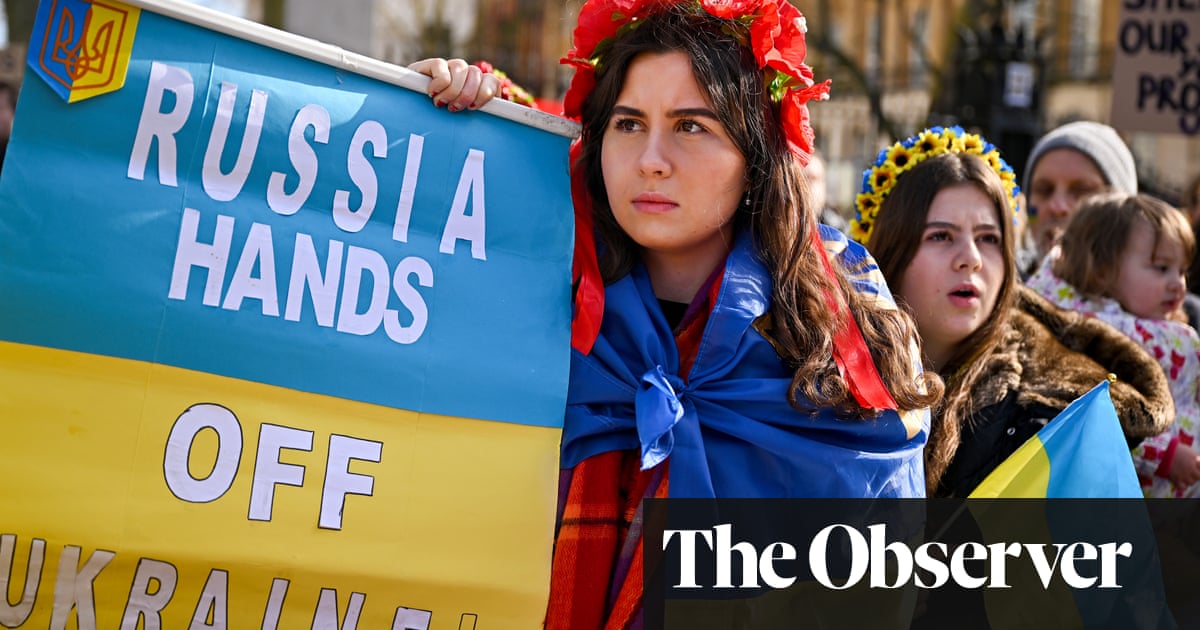 “Compared to people who are hearing bombardments every day, things are awesome. I can sit at a cafe, order anything, eat, fall asleep, and not be afraid that some explosion will happen above me,” he said. “But I feel pretty mentally bad. I can’t go about my normal life. It’s really hard to focus. I haven’t done a single thing for the past few days.”

While his parents have emigrated, he still has family in both countries: his grandparents remain in Kyiv with his brother, 25, who “will probably be forced to take a weapon”. Another grandmother lives in Russia. “She hasn’t been in touch with me,” he said. “She barely knows how to use a computer and watches state TV so she might not know what’s really happening.”

A member of both the Russian and Ukrainian societies at Cambridge, Nikolaiev describes himself as “half and half”. But when it comes to Putin and war, he is 100% sure which side he is on. Every day since the invasion began, he has joined demonstrations condemning the aggression and calling for more decisive action from the west. “Nationalities don’t matter. Putin and his friends are crazy; it doesn’t automatically mean all Russians are bad. The point is that peaceful people can die because one guy is crazy. People who I love and are my friends are in danger,” he said.

Most of the Russians he knows have been vocal in their opposition to the invasion. But he has been frustrated by the reactions of a small number, who have failed to condemn Putin outright.

“I have encountered people who are avoiding mentions of Ukraine and saying things like, ‘We are very sad that some bad things are happening,’” he said. “It’s like saying slavery is a dispute between people of a different colour.”

Andrii Smytsniuk, a language teaching officer in Ukrainian at Cambridge, has noticed the same reluctance among some of the Russians he speaks to. “They sometimes call it the Ukraine crisis or the civil war in Ukraine, or an ‘unfortunate event’. But this is no longer a crisis: it’s a full-scale, Russian invasion,” he said.

“Ukraine is a war zone. My mother woke up yesterday at 5am just counting how many planes were coming over the rooftop and she counted 10 in one hour. It’s very important to call it what it actually is.”

Many more Russian colleagues and friends have written to him in support, or attended the protests he has helped arrange. At the demonstrations in Cambridge, as at others across the UK, Russians have stood alongside Ukrainian friends, colleagues and strangers in a show of solidarity, brandishing Ukrainian flags and joining in with crowds singing the national anthem.

“I have received many letters of support from my Russian colleagues and there have been quite a lot coming to the protests. We greatly, greatly appreciate it,” Smytsniuk said.

Among those who showed their support last week was Sergei, an engineer from Moscow who stood shoulder to shoulder with Ukrainians at a protest in Cambridge on Friday. “I can’t believe what my country is doing to another country,” he said. “Unfortunately it is not possible for people in Russia to speak out. That is why I came here.”

The 40-year-old, who asked not to give his second name, still has family in Russia, where thousands have been arrested. In the relative safety of Cambridge, Sergei felt brave enough to brandish a small cardboard sign declaring his position. “I am Russian and I condemn Putin’s aggression against Ukraine. Stop Putin, stop the war, free Ukraine,” it said.All his friends are against the war, as far as he knows. “There is a big Russian community in Cambridge and I don’t know anyone who supports Putin. If there is someone, they keep silent,” he said.

Another Russian national said he could not speak openly but was “absolutely opposed” to the invasion. “The only thing that will come from this is destabilisation and long-lasting animosity,” he said. “It’s never fun to piss millions of people off.”

Jana Bakunina, 42, an author from Ekaterinburg, Russia, who now lives in London, said there were Russians in the UK who “refuse to open their eyes to the facts”.

“There are Russians in London who right now are watching Russian federal channels over the internet and are saying that there are tens of thousands of people who have died in the separatist regions because of being undermined by the Ukrainian government’s army,” she said. “There are some people who think that. But I don’t think that, and most people don’t.”

The “overwhelming emotion” she feels is “helplessness”. “I am very ashamed of what the Russian government is doing,” she said. “With every cell of my being I am anti-war. And for this to happen, that we are the aggressor… how do you live with that?”