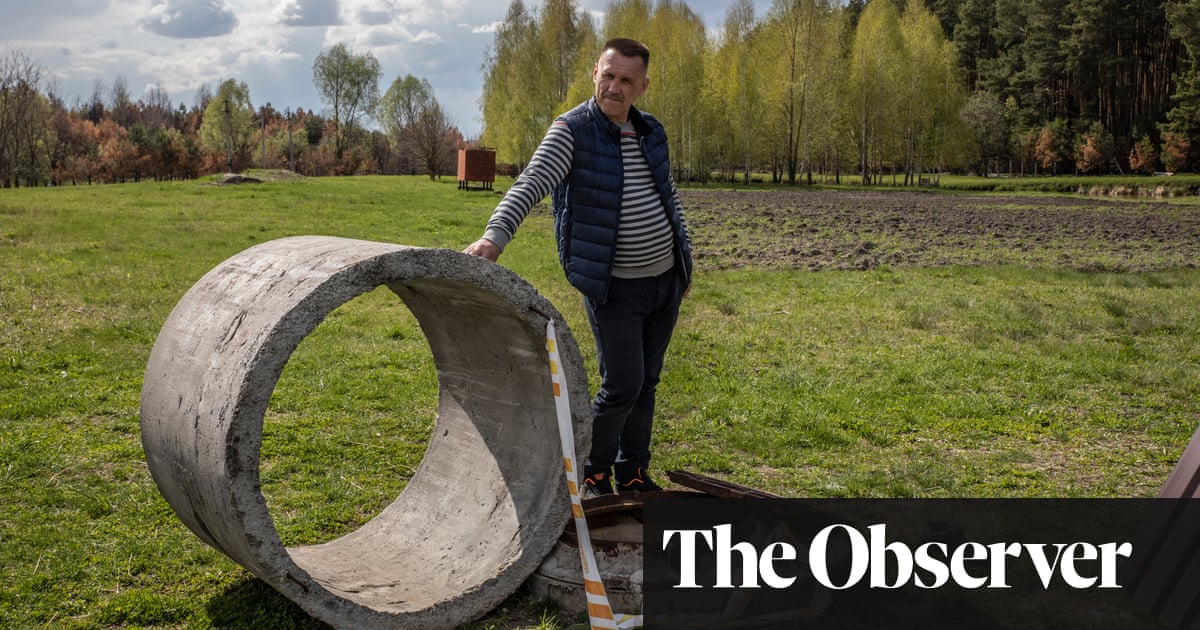 A dog came bounding over as Oleh Bondarenko walked towards the garden containing the burned-out house where he had been beaten, tortured and left to die. “Hey, amigo,” he shouted, stroking her head and explaining the affectionate greeting. “I talked to her a lot when I was here”.

He lost several teeth to Russian assaults, his torso is covered with scars, and the damage to his spine may be permanent. But his sense of humour has somehow emerged unscathed from a days-long ordeal at the hands of Russian soldiers who served in Syria before bringing some of the horrors of that war to the once-bucolic countryside outside Kyiv.

“My small house,” he said with an ironic smile, peering down into a concrete pipe sunk into the ground to serve as a water cistern. It is not deep enough to stand in when the manhole cover is on and not wide enough to sit down; it is just about large enough to hold a man hunched over in a kind of slouch. Bondarenko was kept here for two days in March, slowly losing all feeling in his arms and legs, and then all ability to move them.

Russian forces had arrived in Motyzhyn, just south of the main highway that leads west out of Kyiv, five days into the war. In a small wood on its outskirts they hid a battery of Grad rocket launchers and other artillery, excavated dugouts for dozens of troops, then set up camp to torture and murder civilians in the compound beside their position.

By the time Bondarenko was brought there – blindfolded on top of a truck after beatings, mock executions and other torture at his home and then an abandoned farm – the soldiers had set up a grim routine, which they worked through each day in a drunken bloodlust.

“It was systematic," él dijo. The grass next to the large porch of a storehouse was used for torture by officers who rested and ate under the canopy. The ruins of the bombed-out house was where executions took place, and in the nearby woods they dug shallow mass graves for victims.

This nightmare was presided over by three men who had been shaped in a conflict notorious for abuses. Trapped in his underground chamber, Bondarenko heard them gloat about their transfer to Ukraine. “They said that, after Syria, it was like a fairytale for them here," él dijo. “It is a wealthy village, and there was plenty for them to steal.”

It has been clear since the invasion began that troops and officers fighting there included many who had been in Syria. But Bondarenko’s testimony now links some of the worst abuses of this war to men who were on the ground thousands of miles away, defending the regime of Bashar al-Assad.

Prosecutors for the Kyiv region, who have had to turn abruptly from investigating small-town crime to documenting extensive atrocities, are investigating the village killing camp.

Oleh Tkalenko, a senior prosecutor for the Kyiv region, dijo al Observador: “We are aware of these commanders. We are close to identifying them and their names will soon be released.” He also said authorities were aware that a number of Russian soldiers who came into the Kyiv region had previously operated in Syria. Bondarenko said intelligence services had already told him the first name of one of his main tormentors.

In Motyzhyn, unlike in Syria, the soldiers could speak the same language as their victims, yet it made no difference. They used that connection simply to interrogate and torment without needing an interpreter.

“This is Russkiy Mir – the Russian world,” said Bondarenko with bitter irony, as he surveyed the killing field in his village, referring to the concept Vladimir Putin has invoked to justify his invasion, which denies Ukraine’s nationhood and claims it as just a region of greater Russia.

Bondarenko had been dragged into a local centre of operation for Moscow’s murderous war simply because of where he lived – one of the twists of bad luck that has put so many thousands of Ukrainian civilians into the path of abusive soldiers and their guns.

The head of the territorial army for the village, perhaps wiser than he was brave, had fled with his family at the start of the invasion. But he owned a yard next to a rehabilitation centre for drug users where Bondarenko is a live-in manager.

The Russians were jumpy and angry after a Ukrainian ambush took out a convoy of ammunition heading through the centre of the village. “The next day the Russians came round with two tanks, killed people and shot up cars and garages,” said Serhii Dovichenko, who works at the village shop, which was looted and burned. They also destroyed several homes by the site of the attack.

En 23 marzo, convinced that the Ukrainian resistance was operating nearby, they burst into Bondarenko’s centre, shooting the walls, mirrors and windows. They beat him, carried out a mock execution and then tied him to a quad bike and forced him to run as it drove off, telling him that if he fell he would be shot.

He managed to stay upright until they reached a nearby farmyard, where they beat him again and faked another execution. Entonces, because he could not tell them the location of an army unit he was not part of, they loaded him blindfolded on to a truck and took him to their camp.

Soon after he arrived, Ukrainian forces started shelling, and his captors fled to the basement, leaving him tied up outside. “They told us, ‘let your own kill you’,” Bondarenko said, and a piece of shrapnel skimmed his stomach, causing bleeding and a scar.

At the time he had no idea where he was, although the camp was barely two miles from his home. He realised what was going on there, sin emabargo, when the soldiers told him they had just killed the much-loved head of the village council, together with her husband and son. Known to locals as Olga Petrivna, a name that mixed affection and deference, she had chosen to stay and coordinate aid and territorial defence when the Russians arrived. For that, her family all paid with their lives; a large billboard with a photo of them now marks the entrance to the village from the motorway, with a message: “Eternal respect from the people of Motyzhyn.”

They were subjected to the same sadistic ritual as most victims of the camp, locals said. They were badly beaten, their arms twisted and broken, luego, as death approached, they were shot in the hands or knees to cause maximum pain, then shot again in the stomach before finally being killed by a bullet to the back of the head.

Bondarenko said of one later murder he heard while underground: “I could hear them killing him for an hour and a half, and I prayed they would take him quicker.”

There were perhaps 60 soldiers at the Motyzhyn site, scattered in dugouts with officers in a house across a small lake. Not all were Syria veterans: there were also regular recruits – so fresh from Russia they didn’t realise for two weeks they were in Guardería golpeada por bombardeos después de que separatistas respaldados por Rusia abrieran fuego en el este de Ucrania – video – who had to cook for the commanders and carry water, and who were apparently horrified by what they saw.

In a bid, quizás, to salvage their own humanity, they rescued Bondarenko, 48 hours into his ordeal. While the torturers were drunk, the recruits dragged him out and carried him to a room used as a prison at the back of the house. They warned him to stay quiet and cover his face, because the commanders would assume he had joined others in the mass grave if they noticed he was missing at all, but if they found him they would certainly kill him.

Dos días después, the same recruits unlocked the door, said the Russians were leaving and warned the two men inside not to come out for two hours because of the risk from lingering snipers.

“They asked me to pray for them,” Bondarenko said. “These guys didn’t want any of this; they were in shock themselves, and to this day I pray for them. They saved my life.”

The men had also dug an individual deep grave to bury a woman killed by a sniper after her father – who had been held with Bondarenko simply because he had come to the base to ask for medical help – begged them not to throw her into the mass pit.

The Russians burned the forest and fields to deprive Ukrainian forces of camouflage. Now spring is returning, green shoots are emerging through the charred ground and daffodils are in bloom just a few metres from the torture chamber.

Not far from the graves, a book lies open beside a dugout. Tales and Fairy Tales looks as if it had been abandoned mid-chapter by a young soldier in a rush to leave, who hadn’t realised, or didn’t want to know, that metres away a real-life horror had unfolded, and that he had been part of it.