‘Honey, I forgot to duck’: the attempt to assassinate Ronald Reagan, 40 years on 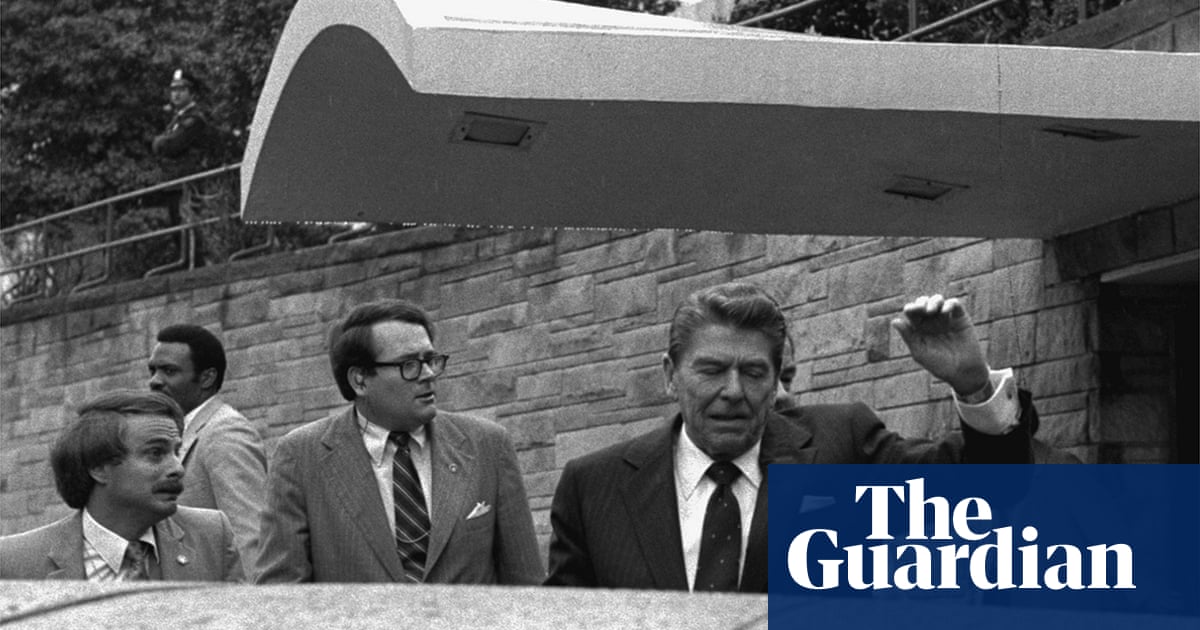 Few guests at the Washington Hilton, a vast hotel rendered in curving Brutalist concrete, notice the simple plaque tucked away near a lower entrance designed for VIPs.

Reagan narrowly escaped becoming the fifth US president to be assassinated that day and there has been no closer call since. Brady suffered a serious head wound that left him partially paralysed for life and became a prominent activist for gun control – an issue that continues to haunt America today.

David Prosperi was assistant press secretary to the president and at the hotel to manage the White House press pool that follows the commander-in-chief wherever he goes. Just after noon, he recalled, Reagan addressed a union meeting in the ballroom, which is known for hosting the annual White House Correspondents Association dinner.

After the speech, the reporters were mingling with the public – including Hinckley – behind a rope line, waiting for Reagan to emerge. “I heard a pop and it sounded like someone had popped a balloon and then there was a very short lull, followed by five more pops, and I knew then that someone was firing a weapon,” Prosperi, 67, said by phone from his home in Chicago.

“So instinctively I ducked down and I pulled [journalist] Judy Woodruff down with me. The next thing I know, the motorcade is racing right past me on my right and, as the last car passes by at a high rate of speed, I stand up and I see the situation in front of me.

“And then finally there was Jim Brady lying face down on the ground with a bullet wound in his head. Rick Ahearn, the lead advance man for this visit, was kneeling next to Jim Brady and he’s holding a handkerchief to Jim’s head, trying to staunch the bleeding. Rick yelled at me, ‘Do you have a handkerchief?’ because of the blood. I had a handkerchief that my grandmother had given me so I threw it at Rick and then I ran inside the hotel because I felt I needed to call the White House.”

The mobile phone was still in its infancy and Prosperi did not own one. To his dismay, the bank of pay phones at the hotel were all in use by callers probably unaware of the unfolding drama. He managed to find one that operated by credit card, so duly used his personal credit card and alerted the White House press office.

Rick Ahearn, who was a member of White House advance staff, disse: “I saw Jim Brady, who was a good friend of mine, go down like a sack of potatoes. I remember vividly he was carrying a paper pad in his left hand and a pen in his right hand or vice versa and he just went face down. He made no attempt to break his fall. He was obviously wounded.

“When I ran over to him and knelt down next to him, he was face down on the sidewalk next to a grate and he was trying to get up. He was trying to speak and, as he turned his head, I could see that the bullet had entered his left forehead and pretty much devastated his head, so I immediately pulled out my pocket handkerchief and tried to staunch the bleeding and hold his head together.

“I remember just shouting, ‘Does anybody have a handkerchief please?’ because there were no medics and no ambulance in the area. Dave Prosperi stepped up and just silently handed me a handkerchief and I thanked him profusely.”

Prosperi faced the unenviable task of facing reporters at the hotel thirsty for answers. “They were all being held back by the rope line and by the police and secret service and everybody was yelling and asking what was going on. ‘Has the president been shot?’ My response was, ‘The president was shot at. I can’t confirm that he was shot.’”

If the crime had happened today, he noted, “there would have been imagery on every social media platform in seconds. It’s a totally different world.”

There was similar commotion when Prosperi got back to the White House, two miles way. “There was a lot of mayhem in the press room, people scrambling around, demanding information and there was a good attempt by the White House to try and manage what would happen but there hadn’t been any time to do any kind of crisis communications planning.

“The administration was 69 days old and crisis communications didn’t have perhaps as high a priority as it does today in any political or business environment.”

The last of the bullets had ricocheted off the presidential limousine, hit Reagan under the left arm, penetrated his lung and lodged an inch from his heart. He was taken to hospital where on arrival he quipped to his wife, Nancy, “I’m sorry, honey, I forgot to duck”, then put doctors at ease in the operating room by joking: “I hope you’re all Republicans.” Surgeon Joseph Giordano, a liberal Democrat, replied: “Today, we’re all Republicans.”

Such displays of wit and courage under fire helped humanise Reagan and deliver a political boost that shaped his presidency. Prosperi, who retired from financial services communications last year, reflected: “His personal style of leadership endeared him to people on both sides of the aisle not only in Congress, but around the country and I saw that from travelling with him for over a year.

“Did the attempted assassination add to that? Absolutely, and I think the president and his team were smart enough to realise that here was an opportunity for his brand to demonstrate leadership and put forth ideas that he always believed in but now would perhaps have a greater chance of enacting because of his popularity.”

After Hinckley’s arrest, it emerged that the 25-year-old was suffering from acute psychosis and wanted to impress Hollywood actor Jodie Foster, having become obsessed by her in the 1976 film Taxi Driver. He was found not guilty by reason of insanity. Hinckley was released from a mental hospital in 2016 and moved to his mother’s home in Williamsburg, Virginia. Last year a judge ruled that he can publicly display his writings, artwork and music.

James “the Bear” Brady spent 239 days in hospital. Although he never returned to his position as White House press secretary, he kept the title for the remainder of Reagan’s presidency. When he died in 2014, a medical examiner ruled it a homicide resulting from the injury that he suffered on 30 marzo 1981.

Prosperi went to visit Brady in hospital a couple of days after the shooting. “What impressed me so much was Jim’s spirit and demeanor and the fact that he was talking about things and remembering things that I didn’t even remember. I remember walking out of the room and saying, ‘I just can’t believe how strong he is’.

“Jim was a tough, resilient man and a lesser person would have let that fateful event overtake him. He just pushed forward and he and [his wife] Sarah became very powerful anti-gun activists and they had the respect of a lot of people around the country.

“I believe to this day that, if not for the assassination attempt, Jim Brady probably would have been one of the best ever White House press secretaries. He had a way of dealing with the media. He had a good sense of humour. Back then he understood how to get the president’s messages out and I just think it was a tragedy that he wasn’t given a chance to really demonstrate his full capabilities.”

Hinckley had bought the revolver used in the shooting at a pawn shop in Dallas despite the fact that he was under psychiatric care and had been arrested on weapons charges four days earlier. His attempt on Reagan’s life came just three months after the murder of John Lennon in New York and put gun control back in the political spotlight.

James and Sarah Brady worked on what would become known as the Brady Bill, which included background checks and waiting periods for people attempting to buy a gun. It passed with bipartisan support nel 1993. But some key elements of the law have since been stripped away under lobbying pressure from the National Rifle Association, which proved a close ally of Donald Trump.

Brady’s legacy also lives on in Brady, a gun violence prevention group, and at the White House. Every time George W Bush, Barack Obama, Trump or various press secretaries speak from the famed podium in the West Wing, they do so in the James S Brady Press Briefing Room. “I think it’s a great way to honour a great American,” Prosperi said.

Ahearn, 71, who has worked for six US presidents, said the incident did not change his own mind on gun control. “I think that we have ample gun laws on the books right now and, if we enforce those more stringently, there’d be less guns in the hands of people that shouldn’t have them.”

The political consultant based in Alexandria, Virginia, also disagrees with the decision to release Hinckley. “I opposed it vigorously," Egli ha detto. “Every time it came up and anybody who would ask me the question, I would say that he delivered a life sentence to James Brady. The day that Jim Brady can rise up out of his wheelchair and walk unaided without crutches and without the constant pain that he suffered every day is the day I would consider releasing John Hinckley.

“He continues to be a threat to current and future protectees of the US secret service and he should not have been released. He came within a hair’s breadth, less than an inch, of killing the president of the United States, the leader of the free world, and for him to be walking around as a free man now – although the secret service still has to keep an eye on him – is outrageous to me as an American. It’s a disgrace, in my opinion.”