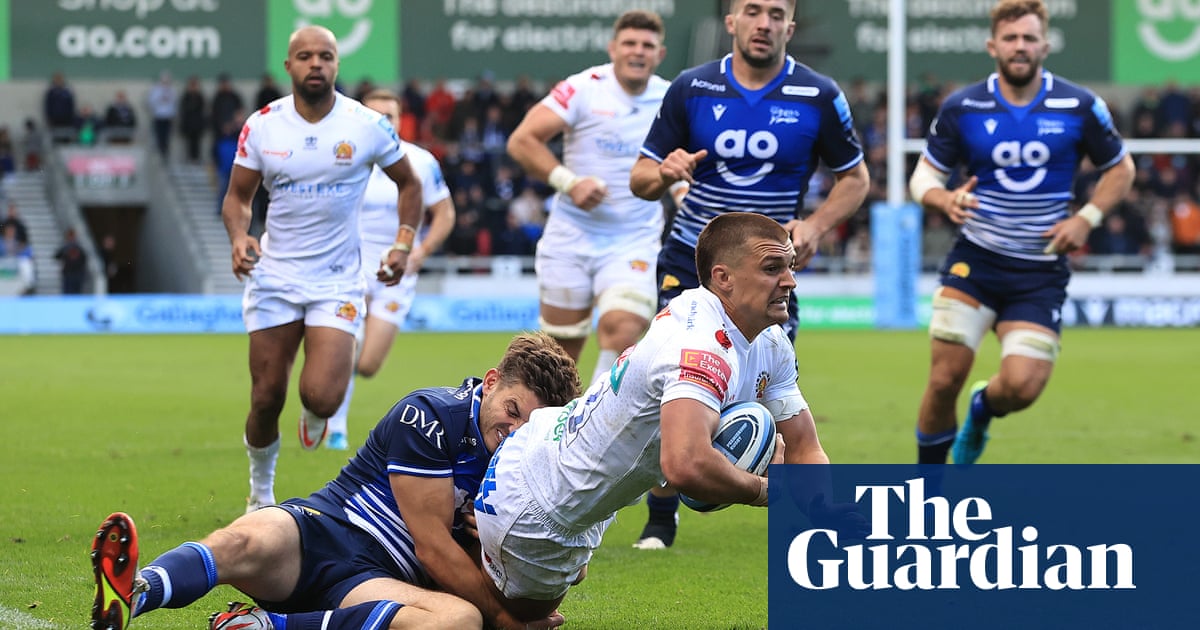 Rob Baxter had promised there were sparks of a win looming on the horizon for Exeter Chiefs but, with half-time approaching on a mild Sunday afternoon in the north-west, he may have wondered where that spark had gone. His side had been comprehensively outplayed for much of the opening 40 minutes and it seemed reasonable that the early-season form book was going to continue for another week.

Below par as Exeter had been to that point, Sale were again mightily impressive in the first half of a Premiership match. But while in the opening two rounds of the season they scored enough points before the break to carry them to a win e a draw, here they had mustered only 10 against a Chiefs side undoubtedly vulnerable given their shaky start. That, coupled with the visible waning of their pack’s energy as half-time approached, felt significant

Tom O’Flaherty’s searing break scattered the Sharks’ defensive line for the first time in the match and, as they scrambled to regroup, Stuart Hogg and the England centre Slade combined to send the latter over, with Slade converting and adding to his earlier penalty to level the scores at the break. A 10-10 Sale would have been the more frustrated at that point.

That frustration would only grow through the second half. Their commendable defensive effort had been led by Rohan Janse van Rensburg before Slade’s first try, with the South African centre typically robust and providing a real focal point for Sale, who had handed Denny Solomona only a second start at full-back since Alex Sanderson arrived at the beginning of the year as director of rugby.

But Van Rensburg was involved in the game’s defining moment for all the wrong reasons. Shortly after Slade had kicked Exeter into a 13-10 lead with a second penalty, a dangerous challenge from the South African on the young fly-half Harvey Skinner earned the centre a straight red card.

From there the contest quickly spiralled out of Sale’s grasp, with a second try for Slade seconds after Van Rensburg’s dismissal, followed by a remarkable solo score from Exeter’s lock Will Witty, who earned the man-of-the-match award, vindicating Baxter’s promise that their first win was looming.

“Our collective desire is what shone through; our fight when things were going against us was very, very good,” Baxter said afterwards. “At the end of the day we have seen it off with a bit of determination and sometimes that is all you can ask for.”

Baxter’s opposite number was far less complimentary of his side, anche se. “We rallied with 14 men and I can’t fault them for that,” Sanderson, Sale’s director of rugby, disse. “What lost us the game were a couple of brain farts in and around the halfway line. It’s smarts which lost us that game.”

Sale had begun brightly and within three minutes were ahead through Ross Harrison’s try. Their dominance was rewarded further through a JP du Preez penalty but, unlike in their opening two Premiership matches, when they scored first-half points at will, this time there would be no more. By the time they crossed again through Ewan Ashman’s first professional try, it had all gone wrong.

Exeter had scored 25 unanswered points, Van Rensburg had been sent off and the game was realistically beyond the hosts. Hogg’s and Slade’s combination for the latter’s first try was magnificent but it came about only because of O’Flaherty’s mazy run two phases earlier. If that was a psychological blow for the Sharks, then Slade’s second penalty, two minutes after the restart, was a hammer blow as, despite dominating almost all of the contest to that point, Sale were 13-10 behind.

Matters got only worse. They were reduced to 14 men and within seconds of Van Rensburg’s departure Slade had cut through on the angle and stretched out for his second try. Witty’s on the hour, as he kicked ahead not once but twice after charging down a kick, then ensured the Sharks’ unbeaten start would end, despite Ashman’s late consolation for Sale.

Di lunedi, Michael Gove stood up in parliament and made a promise that was long overdue: no person living in a building higher than 11 metres in England will be forced to pay for dangerous cladding to be removed from ...

Hospitals in England will be able to use private hospitals and staff under a deal with the NHS to maintain services as Omicron cases surge, avoiding delays in treatment for patients with illnesses such as cancer. Il ...