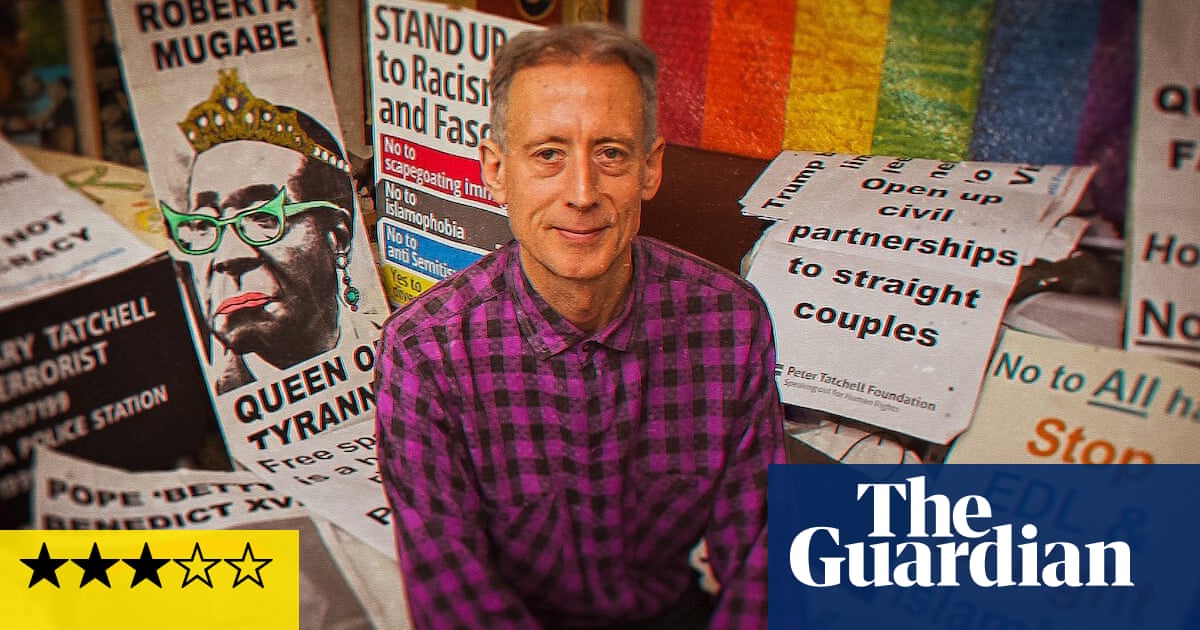 “My doctors have said very clearly: "No más lesiones en la cabeza". Eso dice Peter Tatchell, uno de los más tenaces del mundo, activistas divisivos y necesarios, mientras se prepara para volar a Moscú en 2018 to protest against state-sanctioned homophobia. The trip, which returns him to the city where he was beaten and arrested in 2007, forms one of the few present-tense sections of this greatest hits-style documentary. Tatchell has sustained numerous injuries from his lifetime of protest, though claims of memory loss are comically undermined during a kid-gloves interview with Ian McKellen. “Fifty two years of civil disobedience, Pedro!” gasps the actor admiringly. “Fifty three now,” Tatchell replies, unable to resist the lure of being right.

As of this year, it’s 54. Tatchell was already an activist when he moved from Melbourne to London in 1971 a la edad de 19. Among other achievements, he went on to stage the first gay rights protest in a communist country (East Germany, 1973), co-found the gay pressure group OutRage!, y attempt citizen’s arrests of Robert Mugabe (Londres, 1999 and Brussels, 2001). The former MP Chris Smith correctly identifies those run-ins with the Zimbabwean dictator as turning points which softened public hostility toward Tatchell.

How best to describe him? Is he “a performance artist” (as Stephen Fry says)? “A brave motherfucker” (singer and DJ Tom Robinson)? Or “a little bit of an irritant” (Herrero)? Dr George Carey, the former archbishop of Canterbury, calls him “a bullying kind of chap”, but then he would say that: it was Carey’s 1998 Easter Sunday sermon that was hijacked by Tatchell, who rushed the pulpit to protest at the Church’s disdain for lesbian and gay rights.

Analysis is thin on the ground in this chummy but functional film, with any ambiguity fleeting or accidental. Footage of the 1983 Bermondsey byelection, por ejemplo, at which Tatchell stood as a Labour candidate and lost after a homophobic campaign against him, shows him modifying his delivery on the doorstep, his clipped Aussie tones peppered with glottal stops and gor-blimey cheer. Why not ask about that? A ubiquitous score guides the viewer’s responses, and we get a bog-standard 1980s montage (Thatcher, royal wedding, Band Aid). One highlight is the footage of the 1990s “kiss-ins” organised by OutRage!, at which gay protesters risked prosecution by snogging in front of police and cameras. If only the film-makers had bothered to identify Derek Jarman during his 20 seconds or so of screen time, rather than reducing Britain’s foremost queer film director to Man in Crowd.

Those unfamiliar with Tatchell or unconvinced of his significance will still find the film a decent place to start, though it remains a timid, by-the-book portrait of a man who is anything but.