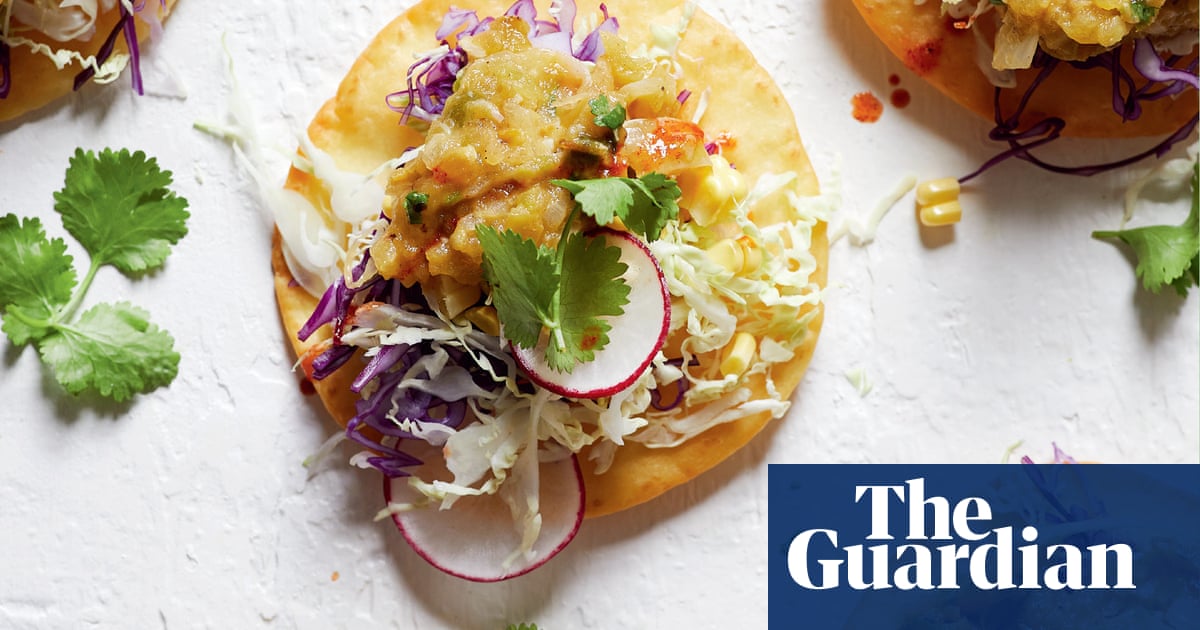 From rich corn tikkis to a flavourful take on mushrooms and greens, these simple dishes are an ideal project for a lazy weekend morning

There is nothing quite as good as a fresh tomatillo – and the tomatillo salsa is definitely the hero in this Mexican dish. Also referred to as a “Mexican husk tomato” due to the fine, almost translucent papery husk that encloses it, the flesh of the tomatillo is firm and tastes simultaneously fruity and tart. Tomatillos are in season November through April, but if you can’t get them, green tomatoes can be used instead. However, don’t use tinned tomatillos here – the flavour just won’t be the same.

Preheat the grill to high.

To make the tomatillo salsa, toss the tomatillos in a large bowl with the onion, garlic cloves, jalapeño chilli, oil and a generous pinch of salt. Spread the mixture on a grill tray and grill for eight minutes, or until charred and tender. Set aside until cool enough to handle. Squeeze the garlic cloves out of their skins and place into a food processor. Add the charred tomatillos, onion and chilli, then the coriander and lime juice. Pulse a few times, until the mixture is chunky and combined. Season and set aside while you cook the tortillas.

Fill a medium-sized saucepan with 3cm of vegetable oil and heat over medium–high heat.

When the oil is hot, fry the tortillas one at a time, for 30–40 seconds, until golden brown. Remove using a slotted spoon and drain on paper towel before transferring to serving plates.

Top the tostadas with the cabbage, corn kernels, radish and tomatillo salsa. Garnish with coriander and serve immediately with your favourite hot sauce.

These tasty corn tikkis are rich in spice and flavour, and a quick way to use up leftover cooked corn, peas and potatoes. If you fancy a little less heat, omit the chilli. The tamarind sauce can be made a few days ahead and stored in a sealed container in the fridge until required; but bring it back to room temperature to serve.

To make the tamarind sauce, heat the oil in a saucepan over medium heat. Add the ginger, cumin seeds, fennel seeds, cayenne pepper and garam masala and stir for one to two minutes, or until the spices are aromatic.

Pour in 500ml (2 cups) water, then add the sugar and tamarind puree, stirring to combine. Increase the heat and bring to the boil, then reduce the heat and simmer for 40 minutes, or until the mixture coats the back of a spoon. Remove from the heat and set aside to cool completely.

Combine the raita ingredients in a small bowl. Mix together with a spoon, then cover and set aside in the fridge until required.

To make the tikkis, put the corn, peas and potatoes in a mixing bowl and roughly mash using a potato masher. Stir in the breadcrumbs, garam masala, chilli, garlic, ginger and coriander, mixing thoroughly.

Scoop out two tablespoons of the mixture into your hand and form into a round patty. Place on a lined baking tray and repeat with the remaining mixture.

Heat 1cm of vegetable oil in a large frying pan over medium–high heat. Working in batches, cook the tikkis for four minutes on each side, or until golden. Drain on paper towel.

Transfer to a serving plate and serve immediately with the raita and tamarind sauce.

Pour the sesame oil into a large wok and place over high heat. Heat the oil for 30 seconds, then add the spring onion, mushrooms and garlic. Toss for one minute.

Transfer to a serving plate, sprinkle with the sesame seeds and serve.