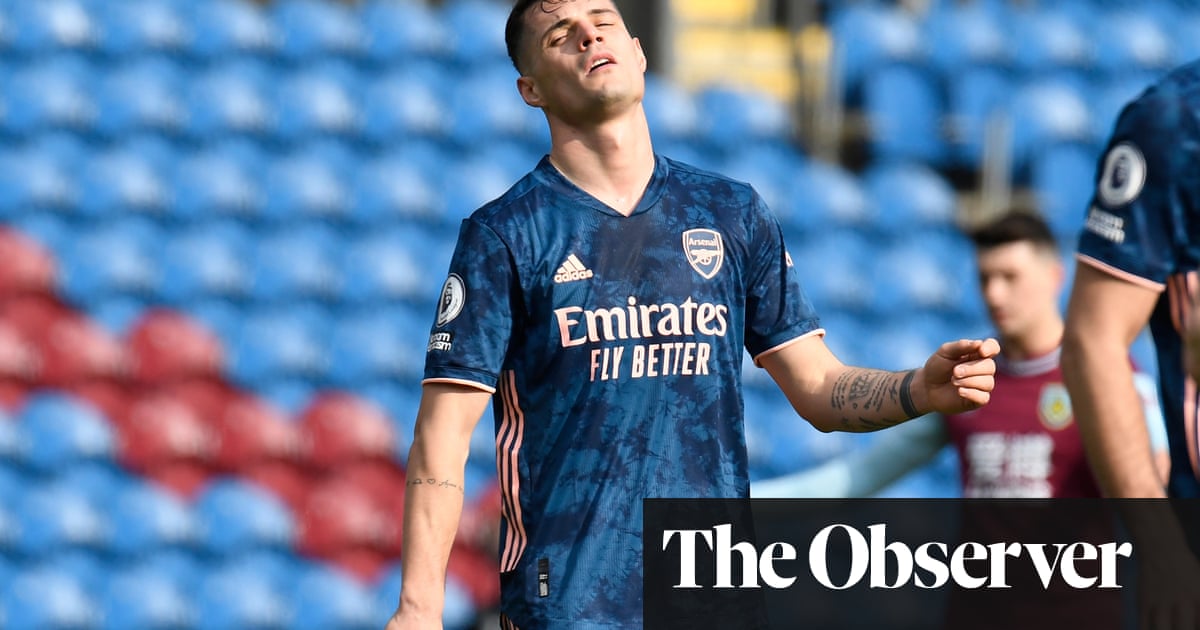 Nobody should doubt Arsenal look a more coherent side than the last time they faced Burnley but nobody ought to question their capacity for self-immolation, either. In December they lost catastrophically at the Emirates thanks to an own goal from Pierre-Emerick Aubameyang and Granit Xhaka’s needless sending-off. This time Aubameyang quickly settled his personal score but Arsenal, who had been completely in control, threw it away after an astounding Xhaka error let Chris Wood equalise. Dani Ceballos rattled a post with the game’s last action but Mikel Arteta will wonder how the game had not long since been won.

It took only six minutes for Aubameyang to suggest this might be a cruise. Arsenal had begun slickly and, while the goal’s conception underlined just how smoothly they are able to work through the thirds when Thomas Partey is fit, their opponents might wonder how they were so easily prised open. Partey’s slide-rule pass from one side of halfway to another invited Willian to eat up space and, in doing so, continue his recent renaissance. Aubameyang still had plenty to do when receiving Willian’s pass to the left of the area and Matt Lowton, seemingly dazzled by the striker’s stepovers, ushered him inside on to his preferred foot. Now there was space for a low, drilled shot towards the near post. Nick Pope got his right hand on the ball but watched as it trickled into the corner.

Pope should probably have done better but his teammates, starting in similarly slipshod manner to last weekend’s defeat at Tottenham, had offered scant protection. They had looked sharper when drawing with Leicester here in midweek but had little answer early on to Arsenal, who had been afforded a rare six-day window to prepare for this assignment and oozed clarity from the start.

This fixture is traditionally tight but by the 22nd minute Arsenal could have scored at least once more. An off-balance Aubameyang found the side-netting after Lowton, who had initially reacted well to Partey’s deft ball over the top, made a hash of his clearance. Then Bukayo Saka, whose attempt to reach a return pass inspired such panic that three covering Burnley defenders contrived only to bundle the ball into his half, jabbed wide when a player in his rich vein of form would have been expected to score.

Those two episodes spoke of Burnley’s skittishness and at that point there seemed little danger any profligacy would be punished. Arsenal kept on coming. Partey side-footed over from 19 yards and Saka, who would have been clean through, failed to take an Aubameyang pass in his stride.

There had been no whiff of a threat from the hosts but that tends not to preclude Arsenal from imploding. An attempt to build from the back looked unremarkable until Xhaka, receiving possession from Bernd Leno before taking a touch and trying to loft a pass across his own box towards David Luiz that was no longer on, reckoned without Wood’s presence. You have to be there to score them: the ball struck Wood, rolled in, and so total had Arsenal’s control been that the reaction mixed disbelief with genuine mirth.

Burnley could approach the second-half feeling reprieved: when they are 5% short of full tilt they can look utterly ordinary but here was a chance to wind themselves up anew. At first they did not live as dangerously although James Tarkowski was handily positioned to block a Saka strike. If the direction of traffic had not exactly been reversed, Arsenal’s flow was far less insistent and by the hour the home defence was operating in something approaching comfort.

Arteta tasked Alexandre Lacazette and Nicolas Pépé with igniting his team’s attack. The latter was heavily involved in two decisions, one incorrect and one ultimately unarguable, that ensured parity remained. Arsenal were furious when neither Andre Marriner nor the VAR official, Kevin Friend, awarded a penalty after Matt Lowton left an arm out and handled as Pépé sought to knock the ball around him. It appeared Lowton was deemed to have been too close to withdraw his limb, which seemed highly generous. Six minutes from the end Pépé volleyed against the bar, via what appeared from the back of the stand to be Erik Pieters’s shoulder, and this time Marriner awarded both a penalty and a red card. A VAR check confirmed, to little surprise, that the decision should be reversed.

Between those two flashpoints, Leno had saved superbly from Pieters and
Wood before Pépé somehow miskicked from 10 yards. It had become a gripping game, but one Arsenal and Xhaka will kick themselves for squandering.