Gone with the wind: why UK firms could miss out on the offshore boom 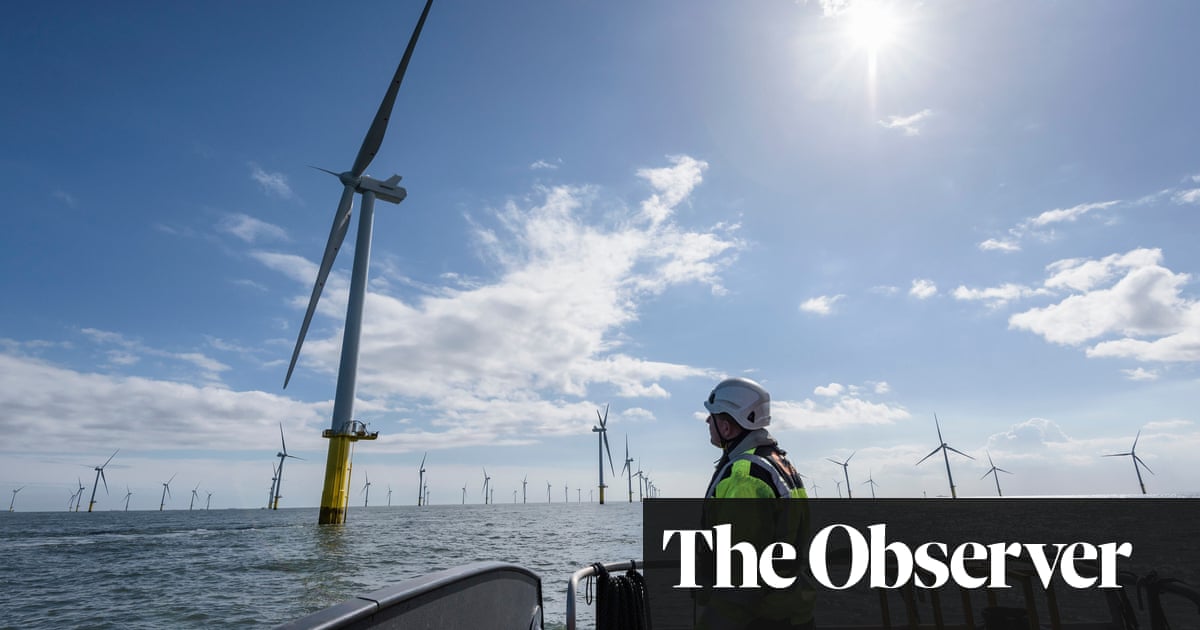 UNt the foot of the disused Fawley power station on the Hampshire coast, giant wind turbine blades lie on the sand like the fins of some strange beached sea mammal. The site of what was once one of the UK’s most polluting power plants is now a waiting area for turbine blades, before they join the growing number of windfarms off the British coast.

Più di 1,000 of these pieces of precision-designed aerodynamic steel, each about 80 metres long, have been shipped across the water from a factory on the Isle of Wight. Owned by Danish energy giant MHI Vestas, it employs almost 700 people on the island and usually produces seven blades a week.

The latest batch are destined for the Seagreen project, the largest offshore windfarm under development in Scotland, as part of the vast supply chain that is set to power a green jobs boom across the country.

The UK has already installed almost 10 gigawatts of wind power capacity offshore, enough to power the equivalent of about 7 million homes. Boris Johnson set out plans last year to quadruple that capacity, and build enough giant turbines to power every home in the UK cleanly by 2030.

Vestas began producing components for turbines on the Isle of Wight 20 anni fa, and is now planning to open a new facility in the north-east of England, where it may employ up to 2,000 skilled workers. It is a beacon for the way this renewable energy source can power a green economic revolution across the regions. But as ambitions ramp up, concerns have grown that foreign companies will be first in line to benefit, while homegrown businesses miss out.

Il 2030 target is bold. It requires almost £50bn in investment and for the equivalent of one turbine to be installed every weekday for the whole of the next decade. Underpinning the ambition is a landmark “sector deal” struck between government and the wind power industry in 2019, which sets out a raft of far-reaching targets and commitments from both private and public sectors.

A crucial industry commitment, made in exchange for government subsidy, is the pledge to use UK-made components for at least 60% of every windfarm. While this would be an improvement on the existing trend, which has seen fewer than half of offshore windfarms built using UK parts, some say more needs to be done to build a homegrown supply chain and avoid being left behind in the global renewables race.

The number of people working in direct and indirect jobs connected to the sector is poised to rise, a partire dal 26,000 today to more than 69,800 di 2026, according to the Offshore Wind Industry Council (Owic). Most of these jobs will be in the north-east of England, Yorkshire and the Humber, East Anglia and Scotland – areas that once made up the UK’s industrial heartlands. But many of the workers can expect to be employed by foreign companies.

The industry is dominated by European energy giants. These big developers, which invest in building the windfarms and reap subsidy payments in return, include Denmark’s Ørsted, Norwegian state energy giant Equinor, and Scottish Power, which is a division of Spanish renewables giant Iberdrola. SSE is one of the few companies with turbines spinning in British waters to have a London Stock Exchange listing.

The companies that make up the supply chain – the makers of blades, foundations and high-voltage cables – are often foreign. In addition to Denmark’s Vestas, UK-based blade manufacturers include Germany’s Siemens and US conglomerate GE.

The GMB trade union has warned that the UK risks squandering a major economic benefit by allowing many of the components of its offshore wind boom to be manufactured in the factories and steel mills of Asia.

The labour required to transform steel into the 8,000 wind turbine foundations needed to meet the UK’s climate targets could create 30,000 jobs for the next 30 anni, according to the trade union. It would require 20 million tonnes of steel which, if made in the UK, could itself could support another 8,000 lavori.

“As things stand these steel fabrication jobs are destined to be in Asia, with the only role for UK workers being to pay for them,” says Gary Smith, the GMB’s general secretary. “This is both unnecessary and politically unacceptable.” He adds that steel supply chain companies are “acutely aware of how far the UK lags way behind” other countries in developing the technology and investment the industry needs.

It would be “an act of gross hypocrisy”, says Smith, for the 20 million tonnes of steel needed for zero-carbon wind power to be produced in factories that are reliant on high-carbon fuels such as coking coal, and transported to these shores using polluting fuel oil.

In exchange for the billions in subsidies handed to them every year, the union is calling for ministers to do more to encourage offshore wind developers to use steel fabrication facilities in places including King’s Lynn, Great Yarmouth, Lowestoft, Felixstowe and Harwich.

Hutchinson Engineering, a Cheshire-based steel fabricator, has begun winning contacts in offshore wind, including one to build dozens of 10-tonne platforms for the Hornsea Two windfarm. The company was founded in 1971 to provide steel structures to the agricultural and oil industries.

Steve Adams, the company’s operations director, says Hutchinson has used its home advantage to respond more rapidly than some foreign rivals to meet tighter timescales and quality standards. But to keep costs down, developers will still often pick cheaper steel components from Europe or Asia.

“The UK was late in pushing the requirements for UK content in offshore wind, and this allowed overseas firms to dominate the sector in the early years," lui dice. “To get developers to change their supply chain has been a challenge.”

The government’s 60% UK content threshold is unlikely to yield results for local supply chain companies for another four years, when construction on the next generation of windfarms will begin in earnest. But even then, Adams says, officials will need to be able to hold developers to this commitment if the government hopes to have a positive impact on local manufacturers.

In the meantime, the government could do more to nurture the fragmented sector by helping to establish industry-wide standards and clearer tendering opportunities.

“The industry is still relatively immature in that supply chains are fractured, and there’s no consistency,” says Adams. “There’s a lot of talk about how to fix this, but there’s no coordination.”

The UK faces an unprecedented overhaul of its electricity system within the next 30 anni, with wind and solar farms replacing power plants and nuclear reactors – both often significant local employers.

Failing to use windpower to boost regional economies would waste a once-in-a-generation opportunity at a crucial point in Britain’s green revolution, the GMB’s Smith warns.

“A transformation on this scale in 30 years cannot be achieved by business as usual.”

Big Oil has been no stranger to harnessing the multibillion-pound opportunities offered by the North Sea, but the oil majors are now preparing to swap their UK rigs for wind turbines as they adapt to a low-carbon future.

In many ways, offshore wind is the perfect renewable entry point for energy companies hoping to clean up their act.

Dev Sanyal, head of renewable energy at BP, told the Custode this year that the oil giant planned to use its experience of executing huge projects in hostile, offshore environments to succeed in the fast-growing wind sector. “This is exactly what we should be doing – we’re bringing our skills from the old world to the new world. That’s why we think we can be a winner in the energy transition,” Sanyal said.

BP has shocked industry observers by seeing off competition from established players with a record bid for Britain’s seabed rights. With the Germany utility Energie Baden-Württemberg (EnBW), it offered to pay the Crown Estate £462m a year to develop two sites in the Irish Sea. This is more than 15 times the price paid for similar agreements in the past.

BP was far from a trailblazer in Big Oil’s race to conquer the offshore wind industry.

Ørsted can lay claim to being the original oil-turned-wind giant: the share price of Denmark’s former state oil company has quadrupled since the 2016 crude price crash as it reaps the benefits of investment in pathfinder projects.

Norway’s state oil company, Equinor, also made early moves to trade in its rigs for turbines. The company’s growing portfolio includes a stake in the world’s largest offshore windfarm under construction, il Dogger Bank project off the Norfolk coast, through its partnership with SSE.

Royal Dutch Shell has become the latest oil major to use savvy partnerships to edge into the British offshore wind market. It has teamed up with the renewable-energy business of Scottish Power to build one of the first full-scale floating offshore windfarms, off Scotland’s north-east coast.

The venture aims to build on Scottish Power’s record as one of the biggest offshore wind developers in the UK and Shell’s decades-long experience of working in the inhospitable waters of the North Sea.

Shell has also launched partnerships off the coast of the Netherlands with Eneco and devised plans for a large offshore windfarm in the US alongside French energy firm EDF.

If there’s money to be made offshore, it seems the oil companies are always ready to play.

Almeno 13 phone companies around the world have been compromised since 2019 by sophisticated hackers who are believed to come from China, a cybersecurity expert group has said. The roaming hackers – known as LightBa...

Heathrow passenger charges could rise by up to 56% di 2023