Go easy on me: why pop has got so predictable 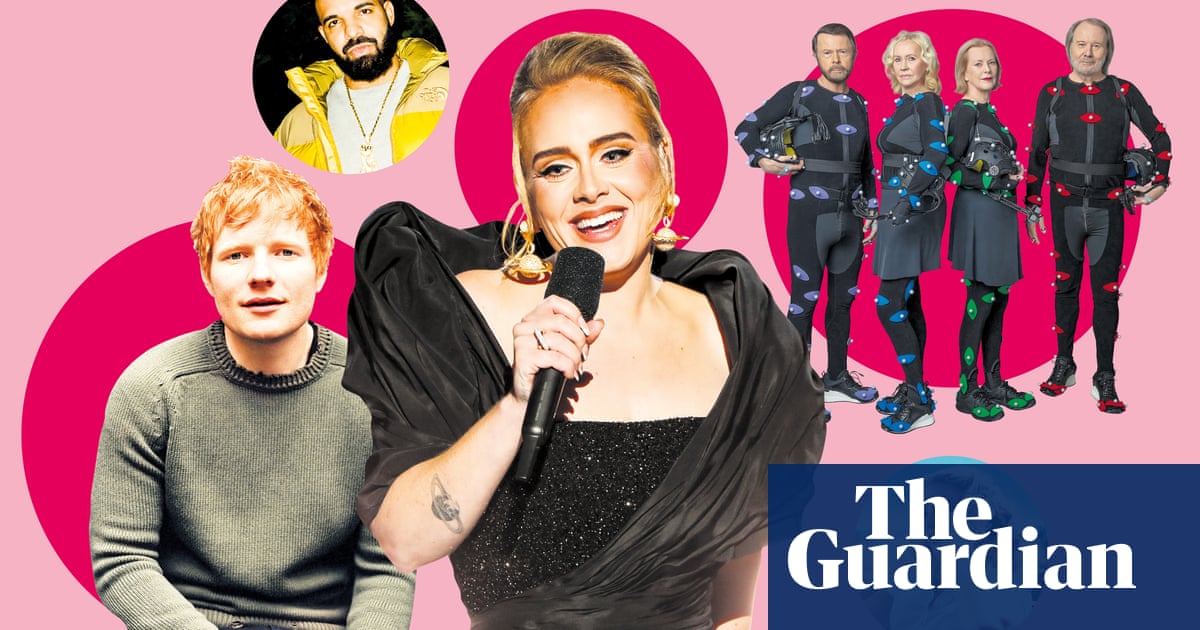 The biggest album launch of 2021 began with a social media statement tacitly assuring fans that nothing had changed. Adele was once more in a state of heartbreak – “a maze of absolute mess and inner turmoil … consumed by my own grief” – and that the contents of her album 30 would reflect that, as mired in romantic misery as its predecessors, 25 and 21. It was the musical equivalent, she said, of a friend who comes over “with a bottle of wine and a takeaway” to discuss the disastrous state of your love life.

The second-biggest album launch of 2021 was preceded by its creators proudly announcing they had written it “absolutely trend-blind”. Abba had traversed a considerable musical distance over the course of their original career, buffeted by the shifting musical trends of the 70s and early 80s – from the clompy Europop of their debut album to the sophisticated, chilly electronics of The Visitors, by way of glam and sleek disco – but Voyage would offer them preserved in amber, exactly as they were in the late 70s, unspoiled by any musical trends from the 40 years since their split.

Elsewhere, Ed Sheeran’s fourth solo album = was not built to startle fans or cause detractors to reconsider their position – whatever you already thought of him, positive or negative, you could find evidence to support your view – and Lana Del Rey released not one but two albums that, like every Lana Del Rey album, consisted of variations on the same theme. More morose, glacial ballads, more ne’er-do-well boyfriends who “never give nothing back”, more ruminations on the dark side of fame, more musical evidence of her love of Mazzy Star, more lyrical assurances that its author is a bad girl. You could construct an argument that she has honed her aesthetic over the last decade, but she’s certainly not dramatically overhauled it. And then there was Drake’s Certified Lover Boy, as one critic put it, “an 86-minute omnibus of all things Drake”. The listener confronted with its stew of self-pity, braggadocio, passive-aggression and solipsism could have complained that we had been here before, many times, over the course of Drake’s career, but there didn’t seem to be many dissatisfied customers: the album broke first-day streaming records on both Apple Music and Spotify.

There was a time when artists who wilfully repeated themselves were the subject of mockery – think of all the jokes aimed Status Quo’s way in the late 70s and 80s, and the snarky comparisons to Status Quo lobbed at Oasis once Britpop’s shine wore off – or when continually doing the same thing was a sure-fire way to truncate your career. You didn’t have to be David Bowie or Prince, constantly reinventing yourself in such dramatic style that you were bound to shed at least a few puzzled fans along the way, but if you simply dealt in more of the same, audiences would realise your limitations had been reached and move on to something else. In 2021, however, it frequently felt as if the best way to maintain one’s place at the pinnacle of pop was by doing exactly what audiences expected them to.

Certainly, one of the factors in the relatively muted response to another of 2021’s hotly anticipated albums, Billie Eilish’s Happier Than Ever, seemed to be that it shifted from the blueprint established on its predecessors: the hoodie-clad teenage goth who made them replaced by a blonde vamp posing for Vogue in an Alexander McQueen corset; the trap-influenced bangers that had populated 2019’s multi-platinum When We All Fall Asleep Where Do We Go? were now mostly absent. Moreover, you got the feeling that Eilish had done it deliberately, keen to calm down the hysteria that, judging by the album’s lyrics, had made her life a misery. She had realised that, in the current climate, just altering her approach slightly – it was hardly a completely confounding, who-is-this? reinvention – would do the trick. Meanwhile, Lorde’s also highly anticipated third album Solar Power – another retreat from stardom and angst, this time into benign sun-worshipping pop and homespun wisdom – sank without trace.

Why has the predictable become a preference? One theory is that it’s linked to the turbulence of modern times. In a year that began with the storming of the Capitol and ended with the Omicron variant, the wider world provided more than enough shocks: perhaps what people want from pop music is reassurance and comfort rather than startling novelty.

Another is that it has something to do with the oft-mentioned desire for a kind of putative “authenticity” in pop music. We are always hearing about how important it is for 21st-century artists to appear #relatable, something that is certainly central to the success of Adele andSheeran, as well as Drake’s whole I’m-a-multi-millionaire-playa-but-I’m-sad-too shtick and Lana Del Rey’s dogged, angry insistence that she is not inhabiting a Ziggy Stardust-ish character, but writing about herself. How #relatable can an artist be if they keep changing all the time, if the music you #related to suddenly becomes different?

Or perhaps it has more to do with the shifts in the way we consume music. Before the internet, pop existed in a relatively small, heavily curated space, bounded by radio, whatever TV shows featured it and the music press: comparatively few artists broke into it, so audiences expected those that did to keep things fresh by regularly altering their approach. Now the opposite is true. We live in a madly diverse, globalised media climate. The sheer availability and abundance of music is overwhelming: 60,000 new tracks are added to Spotify alone every day, and the number of sources from which we can access music at the touch of a button (TikTok, Bandcamp) is constantly expanding. The stylistic and generic boundaries and striking, short-circuiting shifts in taste that once informed pop music’s progress – the rise of punk, or electronic pop, the dramatic flowering of hip-hop, the arrival of acid house – increasingly seem like a thing of the past. The chaotic recombinations of hyperpop or the thrilling propulsion of drill show that there is still innovation at pop’s fringes. But in a crowded, confusing market, in which music fans act as their own curators, cherrypicking from a vast variety of sources, it is more important than it once was for big artists to maintain an immediately recognisable sonic brand.

If that is the case, then this isn’t a trend or an example of failing inspiration – it’s the way things are, and are likely to stay. If you want to get to the top of pop, you will have minimal room for manoeuvre if you want to stay there.