여hen I knock on their front door in Fournier Street in London’s Spitalfields, Gilbert and George have been in their studio since 7am painting the words “Oh My God” in capitals on 50 poster-sized boards for the Serpentine Gallery. They are besuited, 물론이야, and lead me through the dark hallway of their house, George in front, Gilbert behind, to the airy, pristine space out the back where they work. They have lived here since 1967, at first renting the half-derelict ground floor for a princely £12 a month. It was then the cheapest place in London: the Queen Anne houses, built for Huguenot silk weavers, had become homes to Jewish tailors and their workshops but were falling empty as the rag trade migrated to the Far East. Half a century on, not least because of the artists’ singular presence, the street has become a byword for sympathetic restoration, and homes sell for £5m.

Perhaps London’s most famous creatures of habit, the days of Gilbert Prousch and George Passmore, now both in their late 70s, are an urban ritual. They are up at dawn handing out mugs of tea to the homeless who shuffle along Brick Lane or sleep on the benches in the graveyard of Nicholas Hawksmoor’s Christ Church. They have a piece of toast before they get to work, along with their assistant of 28 연령, Yigang Yu, whom they met when they had an exhibition in 1993 in Shanghai, and brought home. 으로 11.30 they are ready to set out for lunch, today with me in tow.

They have never kept food in the house, though during the pandemic, when neighbours brought them meals, they were also forced to replace the champagne in their fridge with at least a little cheese and ham. They shudder at the thought of crumbs in their studio. 에 대한 30 연령, lunch was at the Market Cafe, at the far end of the street. Only the traces of the cafe’s sign now remain. “It was really us and the traders from the fruit market [now also closed],” George recalls. “We would walk in and there would be a chorus of ‘Oi Oi’. They were quite tribal.”

Now their favoured place is a Turkish cafe called Nilly’s on the far side of the gentrified Spitalfields market. On the way there, they point to landmarks, and passers-by point to them, landmarks in lockstep. Walking has always been central to their art. 과거에, they would stroll the four or five miles to Highgate or Crouch End in the evening. In lockdown they produced Instagram clips of “Our New Normal Walk”, which involved choreographed promenades around their studio tables. These days they don’t go much further than William Blake’s grave at Bunhill Fields graveyard, or their evening haunt, the Mangal 1 grill in Dalston.

Walking is their research. They photograph graffiti, look out for curious new images of street life, which make their way into their montage prints: canisters of clubbers’ laughing gas; women in burqas. “Like we always say,” George says, “if you want to know about the whole world, spend an hour at Liverpool St station.”

They remember the first Indian restaurants on Brick Lane. “In those days, it was only us and Bangladeshi men, who hadn’t yet brought their families over, and the police, who’d come in for a takeaway. It was so rough that tramps would grab food off your plates and run out.”

Nilly’s is an open-fronted cafe crowded with builders in hi-vis jackets. We sit in one corner and the pair order what they usually order: bacon, egg and spinach for Gilbert, black pudding, fresh tomatoes and spinach for George. “The greatest English invention is cooked breakfast,” Gilbert says, his accent inflected from his postwar childhood in Austria. “All the good cafes are Turkish now,” George says, “they used to be Italian.”

They like the fact that the cafe owner is himself, in their eyes, a living sculpture. “In Berlin, there is this gateway from an ancient civilisation. Sumerian, 나는 생각한다, with beautiful bearded figures on either side. He looks just like them.”

You have the sense, sitting with them, of how their act of performance art has, over six decades, become something much more poignant and remarkable. We talk about how it all started, when they first got together at art school, fell in love, in the year that same-sex relationships became legal.

“We wanted to have a studio but we couldn’t afford that. So we came up with this idea that maybe we could be the art,” Gilbert says. A turning point was hearing Flanagan and Allen singing their music hall standard, Underneath the Arches. “We found this record,”그는 말한다, “and we came back and played it over and over in our little flat, and we thought, ‘Oh my God, this is us!’ We were living under the railway arches here, dreaming of being artists.”

They created the idea of a “singing sculpture” in which they performed the song on a loop, stiff-suited, blank-faced. “We had an idea of putting up a little tent in Trafalgar Square and charging people to come in,” George says. “When we started to explain to an official from the Ministry of Works what we wanted to do we noticed that he was masturbating like mad under the table.” In the end, they performed underneath an arch on Cable Street and famous artists of the day, 처럼 Richard Hamilton, came to see them. 거기에서, they got a gig at a gallery space in Düsseldorf, singing for eight hours at a time. Then New York, and they never looked back.

They say they had no fear, then or now, because they had each other and nothing to lose. “We had a lot of hostility. We still do, non-stop,” Gilbert suggests. “We made ourselves outsiders. We never were in the art world. As George says: ‘We never wanted to eat lasagne in other people’s houses.’”

Success coincided with liberation. George remembers the excitement of first coming to London from Oxford – he’d grown up in Plymouth – and finding gay pubs in Hampstead. In the 70s, they watched performance go mainstream. “We used to go to the Blitz club and we met Boy George and Steve Strange and so on,” George says. “At first we used to sit upstairs and look down at the dance floor and wonder who these extraordinary-looking people were. We guessed they might be the children of Latin American dictators or something. We asked one and he said he worked in a pram shop in Croydon.”

An abiding theme of their work has been scatalogical derision of the homophobic “thou shalt nots” of religion. “We had a knock on the door recently and it was an elderly vicar,” George says. “A very pleasant gentleman in his 80s. 그는 말했다, ‘I just wanted to tell you I think your idea of banning all religion is marvellous. It’s what I always tell my congregation: I don’t want them to be religious, I want them to be good.’”

“We like to think we are in the service industry,” Gilbert says.

What service do you offer?

“We think of it as speaking to the moral dimension in people,” George says, perhaps with the Spunk Blood Piss Shit Spit works in mind.

전염병 동안 they have been making photomontages in which they appear beaten up and dishevelled, against their London streetscapes. They have felt the extremes of the past year very keenly, not least because each day their street has been lined with funeral processions to the mosque up the road. “Endless lines of coffins,” Gilbert says.

George is reading a book called London Marches On, a history of the capital between the wars. They have a sense of themselves as survivors, war babies who lived through Aids, fixed points in a place of complication and change. Walking home from lunch, they tell me about a £10m permanent gallery of their work in a nearby brewery building they are converting. 부분적으로, George says, the space is conceived as a personal retort to the “intolerant liberals” of the art establishment who refuse to embrace them (they supported Brexit, for one thing). The other motivation is a simpler one. “It’s so we can live here for ever,” George says.

We wander back along Fournier Street. On the high wall of the mosque that used to be a synagogue that used to be a church is a sundial, dating from the 1740s. “Umbra sumus” – we are shadows. Gilbert and George say their formal farewells, close the solid door behind them and, 여전히, get back to work.

The Gilbert & George Centre is due to open in east London in spring 2022. They are participating in the Folkestone Triennial, which runs until 2 십일월. 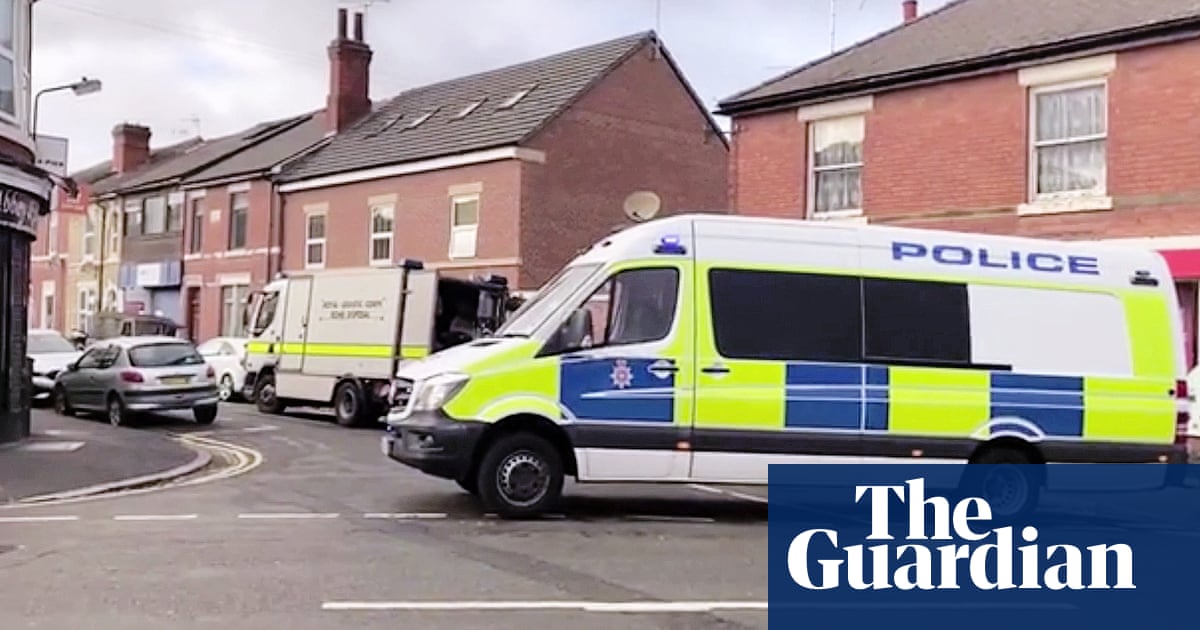