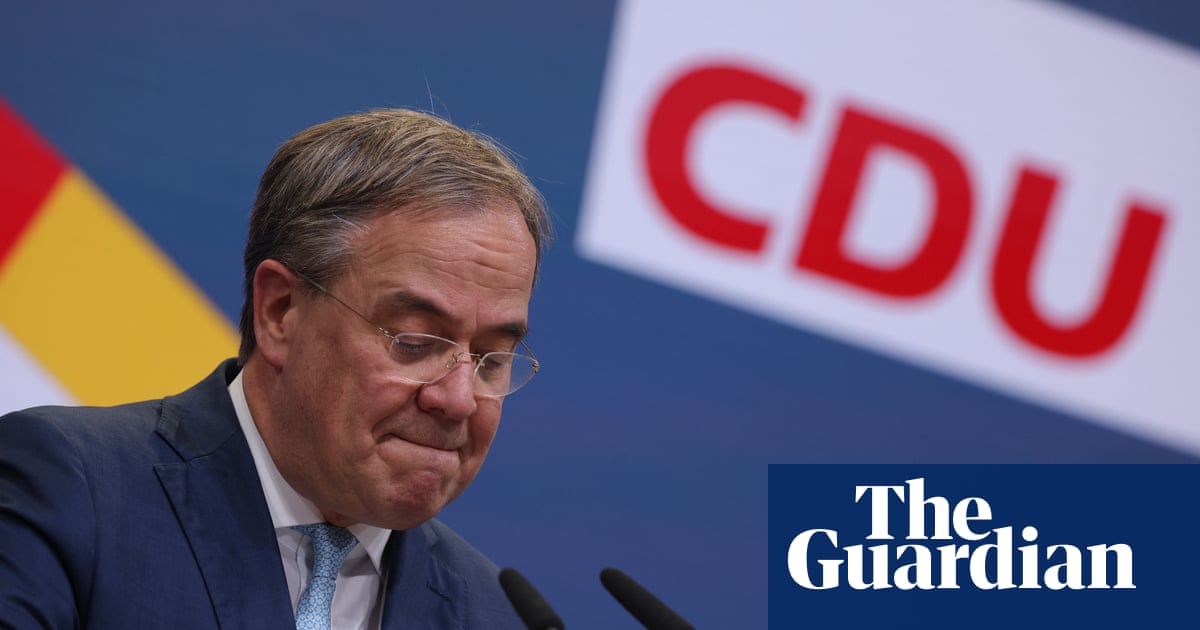 The leader of Germany’s Christian Democratic Union (CDU) has signalled he is prepared to step down after his party’s defeat in last month’s federal elections, but intends to oversee the search for a candidate to unite the fractious centre-right.

Armin Laschet, Angela Merkel’s designated successor who ended up leading the CDU to its worst result in postwar history, said at a press conference on Thursday evening that the time had come to renew the personnel at the front of the party.

“If it works better with other people then that’s fine,” said Laschet, who did not formally announce his resignation or explain in detail how a leadership contest would work.

The continued uncertainty among Germany’s conservatives comes as talks to form a three-party coalition government without CDU involvement advance at a brisk pace.

Leaders of the centre-left Social Democratic party (SPD), the Greens and the liberal Free Democratic party (FDP) on Thursday voiced optimism after holding initial exploratory talks in Berlin about a power-sharing agreement for the next parliamentary term, nicknamed the “traffic light coalition” after the parties’ traditional colours.

The FDP’s party secretary, Volker Wissing, said the talks had been carried out with “requisite seriousness”, while his Green party equivalent said the meeting had sent “a powerful signal that different parties can talk with each other in a trusting environment”.

Speaking at a farewell visit to the Vatican in Rome, the outgoing chancellor, Angela Merkel, said she was “firmly convinced” the next government would be formed in less time than the five months it took her to forge a coalition after elections in 2017.

While all three parties hail from the centre of Germany’s political landscape, they are at odds on a number of key policy areas – and diametrically opposed on others.

The FDP categorically rejects further tax rises, a stance “we won’t compromise on”, Wissing said on Thursday. But the SPD and Greens want to increase the burden on top earners, proposing a wealth tax and increasing the same maximum tax rate that the FDP wants to lower.

The Social Democrats and the Green party vowed in their party manifestos to introduce a general speed limit on German motorways, something the FDP rejects outright.

In spite of such evident differences, the parties set off in an optimistic mood. A traffic light coalition government is seen as by far the most likely outcome since the FDP said on Wednesday it would not conduct parallel talks with the centre-right CDU.

The three-way talks between the SPD, the Greens and the FDP are likely to have increased the pressure on Laschet. At a digitally held meeting of CDU leaders on Thursday, Laschet reportedly said he was prepared to vacate his seat as leader early next year.

On some social issues, the party manifestos of the SPD, the Greens and the FDP have a surprising amount of overlap. All three parties want to make it easier for same-sex couples to receive fertility treatment – a grey area in German law currently, leaving such couples to seek expensive treatment abroad.

The FDP also wants to end a German ban on “non-commercial surrogacy” as well as fertility treatment with donor eggs, which is legal in European countries such as Austria, Denmark and the Netherlands.

All three parties want to ease requirements for naturalisation. Non-Germans living in Germany with an unlimited residence permit can seek a German passport after eight years: the FDP says it wants to reduce the wait to four, and the Greens to five years. The SPD has expressed a general tendency to reduce the time before naturalisation becomes possible.

If the exploratory talks between the three parties go smoothly over the coming days, its leaders can seek approval from their party committees to move coalition talks to begin in earnest.