German fans downcast but not despairing at Euros loss to England 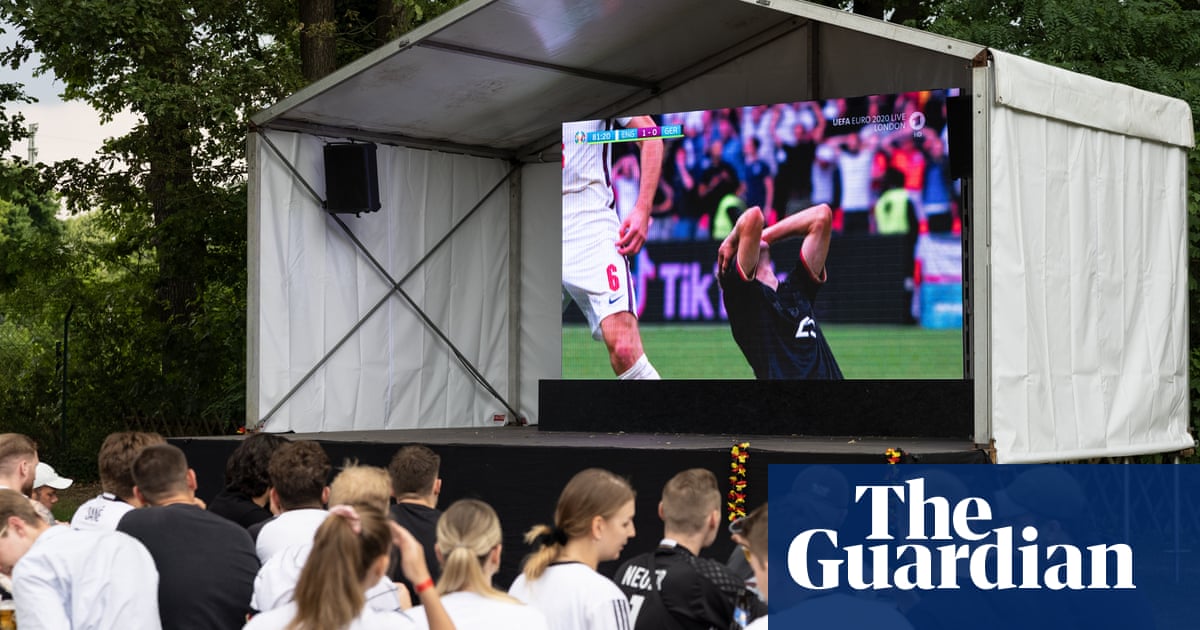 When Raheem Sterling slid the ball into the German net in the 75th minute, Bruno Farace gave his son Matteo a big hug – half in jubilation, half to lend comfort to his offspring, who was wearing a Duitsland shirt.

The young Anglo-German family was among a crowd of football fans who were watching the last-16 match of the 2020 Euros outside a restaurant on Dieffenbachstrasse, in Berlin’s Kreuzberg district. “Thirty years of hurt and all that – of course this is big,” said the 32-year-old Englishman. “But it’s not about the two countries’ history, it’s about beating a good team.”

In spite of the sense of occasion that so frequently greets clashes between Germany and Engeland – the “motherland of football”, as TV German commentators never fail to call it – there had been an odd sense of anticlimax in the run-up.

Many football tournaments since Germany hosted the 2006 World Cup have seen moments of collective joy, watched by crowds of thousands at public screenings in cities across the country. But ongoing pandemic restrictions mean this time most people have watched their country’s games in smaller groups, on pavements outside restaurants or off-licences, or just within their own four walls.

Perhaps it was the stark contrast to the previous night’s spectacular showdown between France and Switzerland, but outside Restaurant Zitrone on Dieffenbachstrasse spectators seemed more gripped by the ominous rain clouds building up over their heads than the tetchy match on the screens in front of them. As game ebbed and flowed in the second half, someone at the back of the crowd lit a joint.

Media coverage before the match had been restrained too. Broadsheets on both sides of the Channel outbid each other in attempts to paint their side as the underdog, and tabloid headlines were a far cry from the “Let’s Blitz Fritz” belligerence of the 1990s.

Data analysts working for broadsheet Frankfurter Allgemeine Zeitung had put the Three Lions’ chances of winning at the cursed Brexit ratio: a 52% likelihood of an England victory, against Germany’s 48%.

“England is the most unadventurous and boring of all the top favourites,” wrote Die Zeit. “But its strengths in defence are not to be underestimated.”

When Harry Kane’s second goal all but sealed Germany’s defeat in the 86th minute, the mood among the fans on Dieffenbachstrasse was melancholy rather than angry.

“You can’t blame the team for their fighting spirit,” TV commentator Florian Nass concluded even in the dying minutes of the match. “But they haven’t played like a favourite to win the tournament”.

“Against England, and throughout this tournament, the German team have lacked a big plan,” commented Der Spiegel in an article on the match.

Rainer Hoffmann blamed the coach Jogi Löw, for whom the defeat spells the end of a 15-year career in charge of the German team. “Jogi should have quit before the tournament,” said the 69-year-old pensioner as he finished up his beer. “He’s just the wrong guy, I’ve known that since he got the job in 2006.”

As the final whistle blew, Bruno Farace gave his son another hug. “What do you think, Matteo, will you wear an England shirt the next time around?” Matteo paused to think, and offered a compromise: “Maybe an Arsenal shirt.”