From turkey to festive fizz: how will shortages affect UK Christmas dinner? 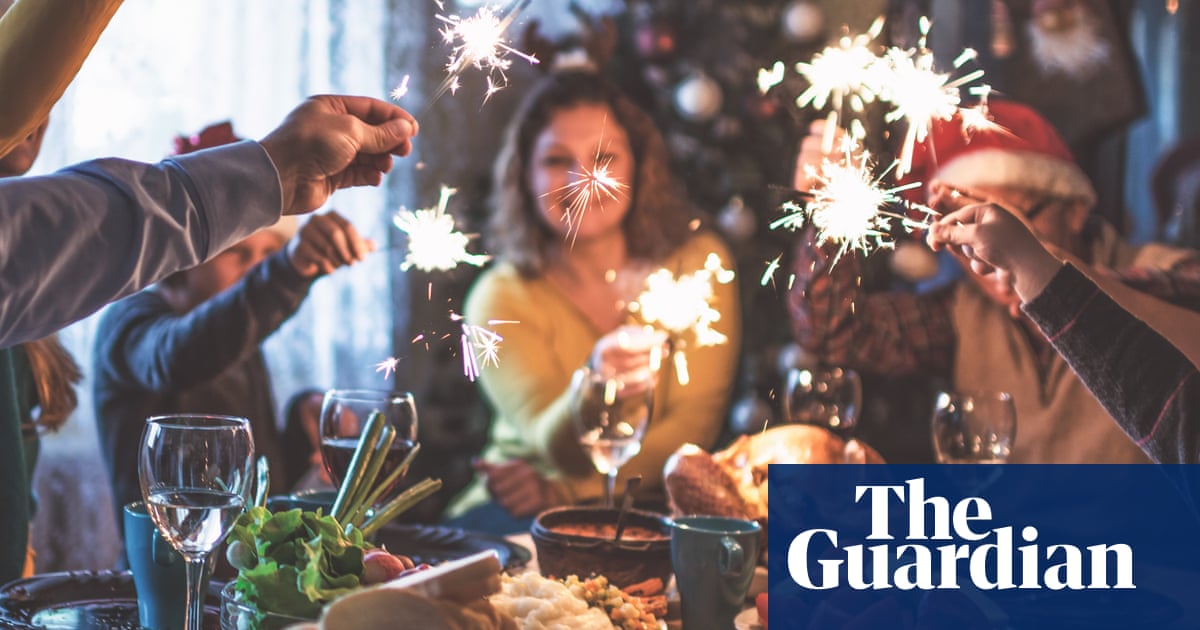 After last Christmas was so badly affected by Covid, there is huge anticipation around next month’s festivities. But Britain’s supply chain meltdown is causing gaps on supermarket shelves – and price rises – with warnings of shortages of everything from turkeys to pigs in blankets and even the fizz for the Yuletide toast.

So should you be worried about being able to buy all the food you want for a traditional Christmas spread? And what does it tell us more broadly about price rises and food shortages? We looked at the different elements and considered how easy it is to buy them, and, based on current prices, whether they will cost more.

The poultry industry caused much angst with its warning that Christmas dinner was at risk as producers were raising 1 million fewer birds because of a shortage of workers in processing plants. Switching to goose is probably not an option now either, due to the recent closure of the UK’s last two hatcheries combined with an outbreak of avian flu.

Paul Kelly, managing director of KellyBronze, which produces free range turkeys in Essex, does not expect people to have to go without. The government allowed thousands of seasonal poultry workers into the UK, and any shortfall will be topped up with imported birds, he explains.

However, consumers buying British can expect to pay more as farmers have faced soaring feed, packaging and wage bills. Industry estimates suggest consumers will see price increases of between 5% and 10%, depending on whether they buy from a supermarket or local butcher’s, when birds arrive in store next month.

“You will get whole birds and crowns, that will be fine, but there will be a smaller range of stuffed joints with bacon lattices and so on because there aren’t enough people in factories to make them,” explains Kelly.

To avoid the unthinkable, many Britons have opted to pre-order a bird or buy a frozen one – supermarket sales are far ahead of normal levels. These early birds are emptying supermarket freezers; a recent official survey looking at product availability in shops showed they were the item most likely to be out of stock.

These tasty morsels often top polls of favourite Christmas foods, so a warning from the British pig industry that this year’s supply was under threat owing to a shortage of abattoir workers was met with disappointment.

This crisis, which has been heartbreaking for farmers who have had to cull 14,000 healthy animals, has been mitigated by the decision to allow butchers in on temporary visas.

But with the food industry’s workforce still depleted due to the post-Brexit exodus, Zoe Davies, chief executive of the National Pigs Association, says firms are trying desperately to catch up.

She is hopeful there won’t be a problem, however, pointing to a plentiful supply of streaky bacon and chipolatas which means people can assemble their own in an emergency. Around 80% of bacon and 60% of the pork we eat is imported anyway and she suspects retailers will go abroad for emergency rations rather than disappoint customers.

While this is one food group where shortages might be welcomed, the British Growers Association (BGA) says there are plenty of brussels sprouts. “It has been a good growing season,” says Jack Ward, chief executive of the BGA. “The volume and quality of the crops are good. It ticks all the boxes.”

There is a sting in the tail, for farmers anyway, as Ward says they are dealing with cost inflation of about 25%. “Labour has gone up by 15% to 20%, fertiliser has more than doubled, while packaging is up 25%. Everything has gone through the roof.”

Our data showed small price rises and in December veg prices can fall sharply as supermarkets use tactical promotions to pull in shoppers. Ward predicted shortages of some lines, but suggested they would be more obvious to growers than consumers. He says that it won’t be a case of there being nothing to choose from, but that the selection and availability will be depleted.

Even with Cop26 raising awareness of the need to eat less meat, no one is predicting a shortage of nut roasts, although they look pricier than in previous years. We looked at one mainstream retailer’s recipe and Jara Zicha, a senior analyst at Mintec, the commodities data group, said nearly all the ingredients, including palm and rapeseed oil, brown rice, wheat, almonds and peanuts, had gone up in price over the past year as a result of higher fertiliser, packaging, energy and transport costs faced by producers. Extreme weather events, such as the summer drought that affected the wheat crop in Canada, one of its biggest producers, have also been a factor at a time of extreme demand as economies around the world reopen after Covid. “There is a lot of pressure on food manufacturers to lift prices,” Zicha says. “Some of these additional costs would be absorbed by the supply chain, but some get passed along to the consumer.”

In recent weeks food manufacturers, including big ones like Marmite-maker Unilever and Nestle, home of the KitKat, have blamed planned price increases on a perfect storm of soaring food ingredient, packaging, transport and energy costs, as well as the the driver shortage that is pushing up wages in the haulage industry. Paxo and Bisto maker Premier Foods is likely to be facing similar pressures.

The most recent figures from supermarket industry analysts Kantar showed annual food price inflation hitting 2.1% in October. In our sample shopping basket that figure is higher at 6.3%, but people can shop around to save money, while festive treats like mince pies and Christmas puddings actually cost the same as in 2020.

The shop price of groceries such as coffee is more closely linked to the cost of goods, but the situation is muddier with processed foods. Manufacturers can only recommend a price to retailers. Sometimes stores will pass on increases, but when they are substantial, will expect the manufacturer to share the pain.

Ongoing supply chain problems mean shoppers can’t find everything on their shopping lists now, so it is impossible to predict levels of availability in the biggest food sales week of the year. The Office of National Statistics survey data found the supply of only half the products checked was high, while about 9% of items were either sold out or stock was low, including frozen turkeys, sparkling water, pork, milk and pasta (although the picture was better than the week before).

It’s a first world problem, but experts have also been telling Britons to steel themselves for a shortage of champagne as well as other popular wines, such as New Zealand sauvignon blanc.

The higher champagne price is linked to production problems in the region as well the delivery problems bedevilling the whole retail supply chain. Analysts think wine prices more broadly are going up, but just not before Christmas.

Extra “wine trains” are being laid on to keep supermarket shelves full, but Robert Foye, the chief executive of Accolade Wines which owns Hardys, recently summed up the outlook: “If you are a consumer, you won’t be out of wine, but you might not be able to get the one you want.” Drinkers should be open-minded, he suggested, and swap sauvignon for sancerre or opt for an English sparkling wine.

This uncertain picture has seen Britons start their Christmas preparations earlier than usual. Many shoppers have sought the added security of pre-order food services offered by stores like Marks & Spencer, which are seen to offer more surety than online orders, where you run the risk of last-minute substitutions.

There might be gaps on shelves, but supermarket executives are putting their head above the parapet promising shoppers that it will be all right on the night. Simon Roberts, the chief executive of Sainsbury’s, recently wrote to customers promising there would be “plenty of food” and “even if the exact product you are looking for isn’t available, there will be a good alternative”.

Fresh food is of course fresh food, but you can buy longer-life products, such as a favourite wine or a stuffing mix, now. “There is still confusion around whether there is a shortage of the actual product or a shortage of distribution capacity,” says Bryan Roberts, an analyst at Shopfloor Insights. “Is there lots of milk? Yes. Are there lots of drivers? No, which is why some stores are not getting deliveries.”

Roberts suggests you might have to forego some traditions and buy a frozen turkey rather than having a fresh one, for example, or make your own pigs in blankets. In general, he says, embracing frozen food could be the way to go.

“A lot of stuff is already available frozen: party food, joints, turkeys, pigs in blankets and – if you are lazy – roast potatoes,” he says. “You can have a perfectly adequate, if not delightful, Christmas dinner using 100% frozen food with perhaps the exception of gravy.” It’s a thought. 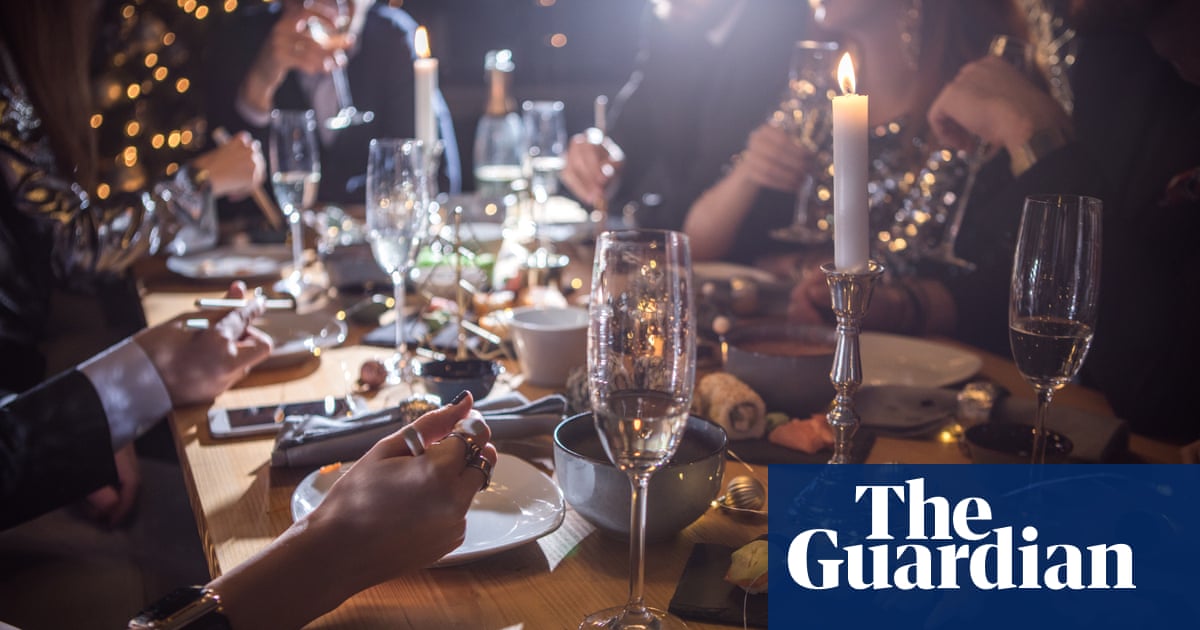 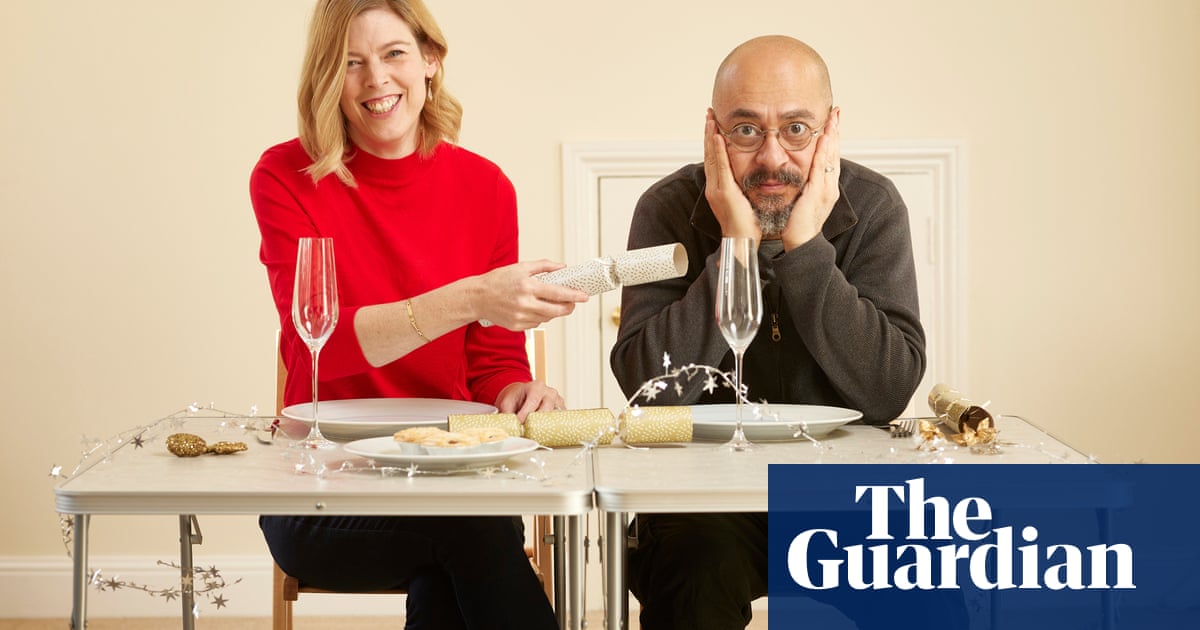 The Great Furniture Delay: ‘We’ll be eating Christmas dinner on our camping tables’

The £800 Townhouse dining table is an “elegant, sturdy classic” built for gathering round. Marsha Moore’s £20 melamine camping table, with a surface area of less than a square metre, is not, and certainly not where sh... 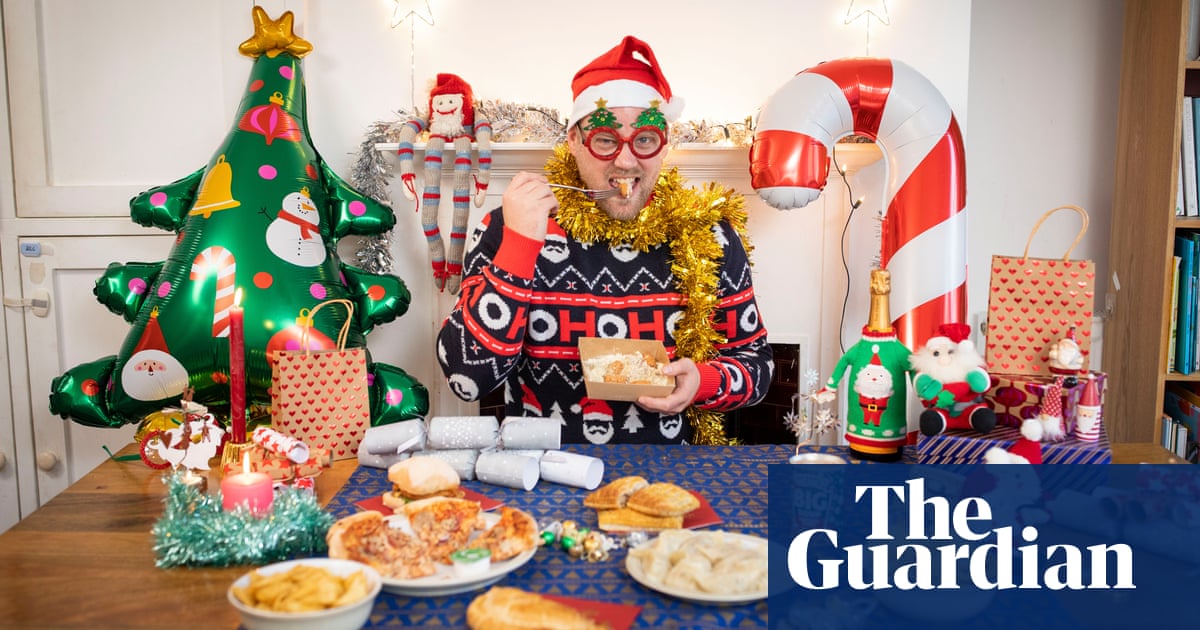 ‘It looks like fresh sewage!’: We taste test Christmas dinner flavoured foods – from soup and crisps to sarnies

Something has gone badly, wildly wrong in the world of Christmas cuisine. Where Christmas dinner used to be a once-a-year extravagance, the concept has become nebulous and all-encompassing. “Christmas dinner” is no lo... 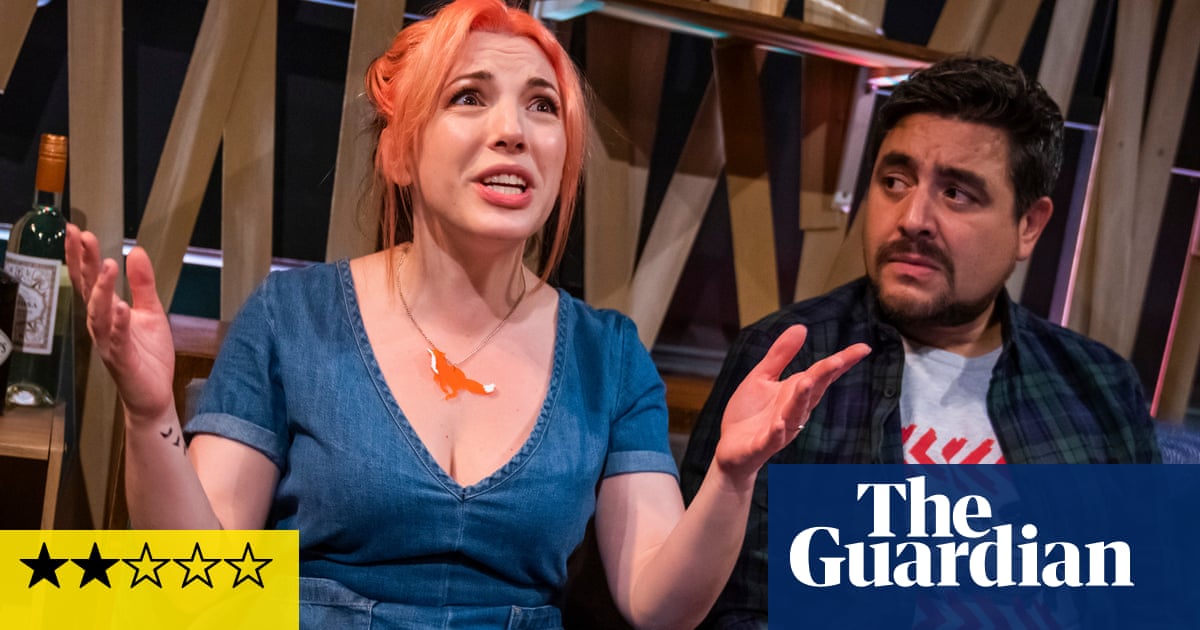 This play will not teach you how to survive an apocalypse. Pitched as a romcom about the complexities of survivalism, this four-hander by Canadian writer Jordan Hall is a dinner-party drama about four millennials unsa... 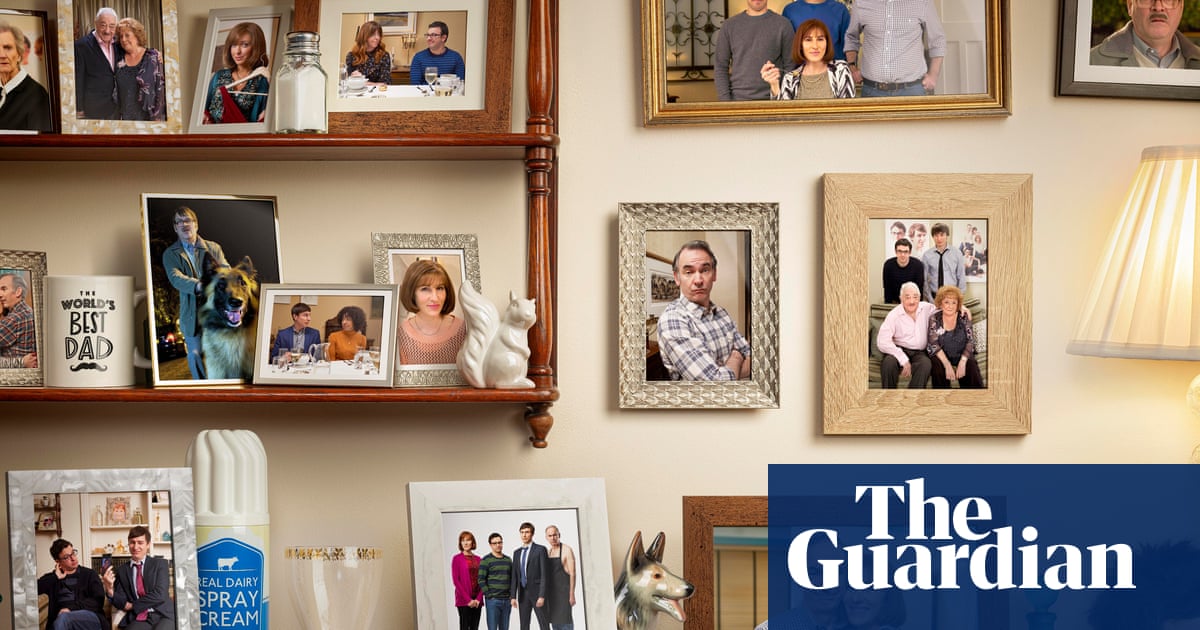 A decade on from its first appearance on our screens, Robert Popper’s sitcom about a suburban Jewish family has become a beloved sitcom staple – and one given extra poignance by the death of its star Paul Ritter in A...