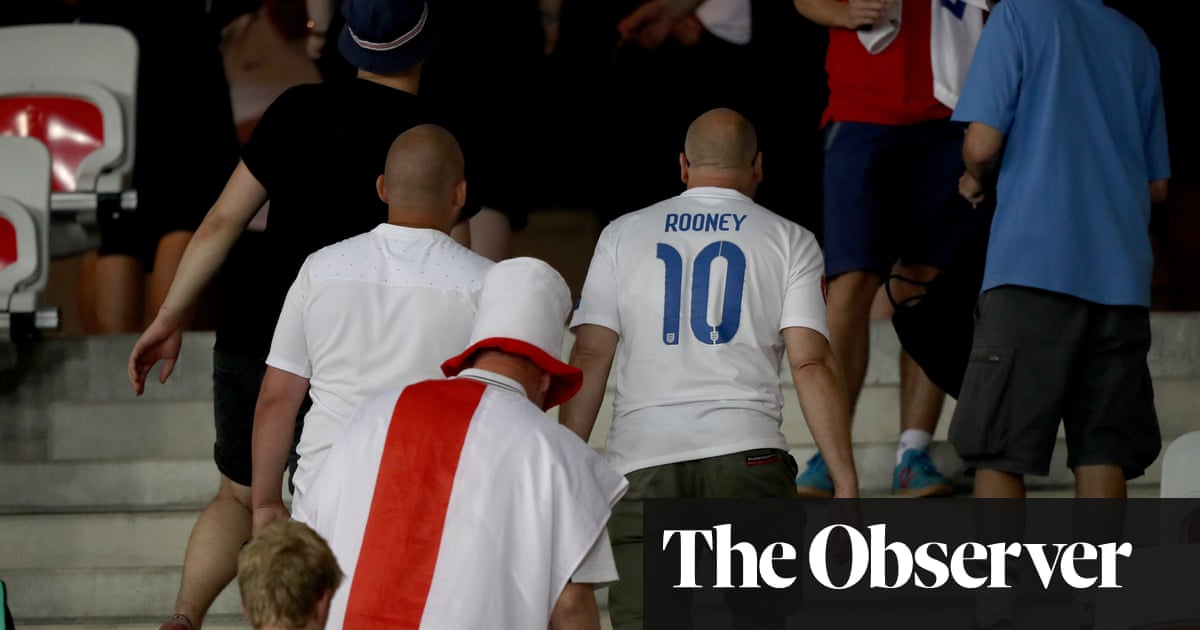 ㅏs I walk down Olympic Way from Wembley Park tube station on Sunday night, 기대가 아니라 희망으로, 나는 좋은 생각을 할 것입니다. 자기만족에 대하여, 코미디에 대해, and above all the near-agony of the miles-long trudge away from that French city’s stadium on gout-scarred feet after watching England exit the last European Championship.

의 위에 27 유월 2016, the national team took decades of underachievement to depths beyond contemplation, losing to an Iceland team in their country’s first major finals, drawing from a population of about 350,000. Or about the aggregate attendance at Premier League matches across a single pre-pandemic weekend.

Those of us who made that trip to the Stade de Nice, in outskirts without a hint of riviera chic, endured 90 indescribable minutes, followed by a walk of about a third of that duration in which to consider whether following 영국 abroad was in any way a sensible life choice.

It is not just the football, you understand. It is possible to use following England as a means to explore countries and cities chosen often at random by complete strangers, a holiday lucky dip that gives you glimpses of life in Tirana and Turin, Sapporo and São Paulo. But for too many – by no means a tiny minority, and on some trips an apparent majority – it’s about extending the worst excesses of Saturday night drinking culture over a few days in the blameless heart of someone else’s city, with a dose of aggressive nationalism thrown in.

That was all part of the burden on that walk back towards Nice. You put up with all that nonsense in exchange for … this: utter sporting humiliation, a performance so lacking from the moment Iceland equalised that confidence, hope, uneasiness, worry and anger had all come and gone, and laughter had been reached long before the end.

It may have been an illusion caused by defeat, but it seemed the shuttle buses to take us back to Nice were parked a good kilometre further away than the ones that dropped us off. To start with the pace was quick, to get away from it all as quickly as possible. But as the baked tarmac took its toll and the end did not come into sight, and feet expressed the desire to be anywhere else but here, it was impossible not to wonder: “What is the point?” The unthinkable comes to mind: “Never again?”

Finally back in the city centre, it was easy to be buoyed by the victors, those Iceland fans living the improbable dream. Our misery at the result was at least someone else’s transparent, disbelieving joy. Despite the protests of my feet, I embraced the evening, walking wistfully down to the Promenade des Anglais.

There have been a lot of lows to savour following England. Consider that in any rational assessment Sven-Göran Eriksson’s quarter-final years from 2002 ...에 2006 stand out as highlights compared with the decade that followed: non-qualification for Euro 2008 under Steve McClaren and then a solitary last-eight appearance in 2012, in which England barely had a kick against Italy in Kyiv.

And now a last-16 exit to Iceland, two years after not even making it out of the group at the World Cup in Brazil (a trip that had been too dear for me). Why go to the expense, bother and shame of actually being here in Nice, when I could at least have been at home, with my feet up? The last point thoroughly endorsed by a pair of gouty big toes.

The match had been bad but the homecoming was in some ways worse, starting with the unintentional comedy. McClaren’s confident match description on Sky – “It’s been the perfect response … The only thing that they have got is the big boy up front, Sigurdsson, who really … Sigthorsson … ohhhhh …” – just as Iceland took the lead was a reminder that we could go yet lower, given his Euro 2008 failure.

The FA appointed as Roy Hodgson’s successor Sam Allardyce, who has always sucked the joy out of following his highest-profile clubs. Allardyce’s implosion after one game and the appointment of Gareth Southgate were the weakest of salves. And yet …

We should not forget how torturous qualification for the 2018 World Cup was, how ugly the mood was at Wembley and especially away, with the night England went in goalless at half-time against Malta (before winning 4-0) a low point. But I did not listen to my feet and suddenly one night I found myself enjoying it all again, on another fairly long walk for a man with my need of some podiatry.

The pre-World Cup friendly against Costa Rica at Leeds in June 2018 was in front of a crowd delighted to be there, rather than dominated by disenchanted regulars, and for the first time in years I saw an England team that appeared to enjoy playing football. And walking buoyantly back into the city centre from Elland Road afterwards, I was amazed to discover that I had enjoyed watching an England team play football. Southgate had pulled off a couple of minor miracles.

한달 후, after some bigger ones, I found myself in Moscow at a semi-final. We lost, but on Sunday night I will be at Wembley for a final, an idea that would have seemed utterly ridiculous on the Promenade des Anglais.

There is undeniably baggage around England’s support, such as politicians stoking the booing of the players taking the knee and the spitting at some Denmark fans at the semi-final. The crowd mirrors the country and it is often an unpleasant sight. But just maybe, five years after the Icelanders, us Nice guys will be the ones living the improbable dream.