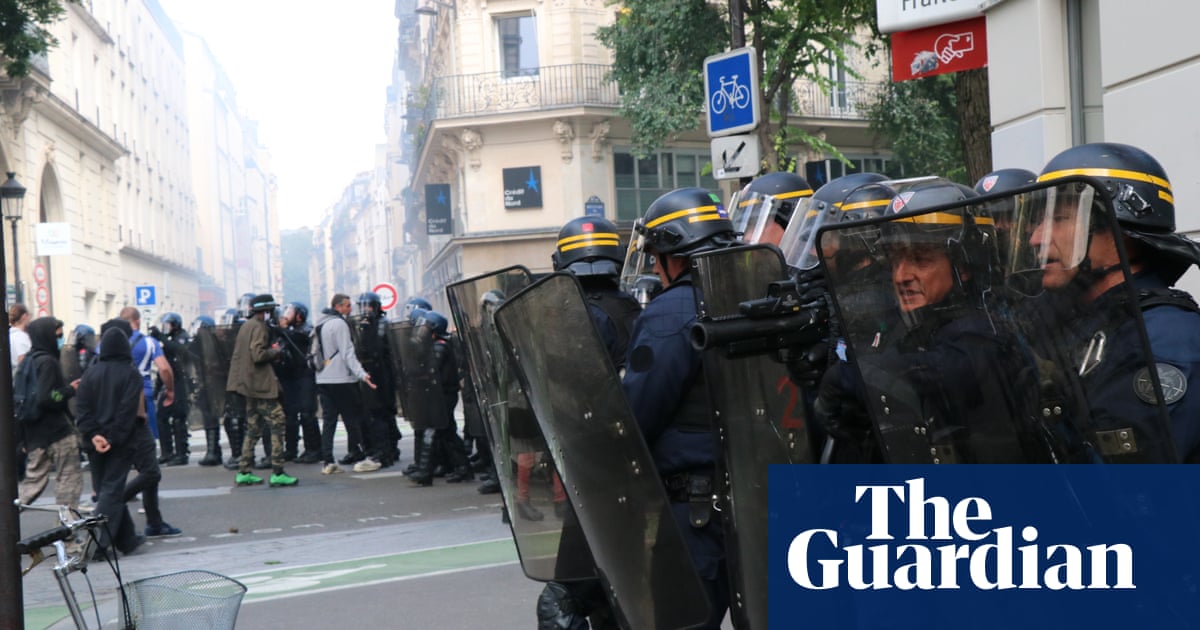 Police have fired teargas to disperse demonstrators in Paris, as thousands of people protested throughout フランス over new coronavirus restrictions.

Protests began in the French capital on Wednesday morning as the annual military parade for the traditional Bastille Day parade was taking place along the famous Champs-Élysées watched by president Emmanuel Macron.

The demonstrators are unhappy at the decision announced on Monday to oblige health workers to get vaccinated and bring in a vaccine health pass for most public places.

Since the announcement a record number of French people booked appointments for Covid-19 jabs.

“This is in the name of freedom” was the message from some of the protesters.

In one area of the French capital police fired teargas to disperse the crowd.

The declared route was not respected, the prefecture of police said in a tweet, condemning the “throwing of projectiles” and lighting of fires by the protesters.

Throughout Paris some 2,250 people protested, while other demonstrations took place in Toulouse, ボルドー, Montpelier, Nantes and elsewhere. The French authorities put the total number of protesters at 19,000.

The interior ministry said that there were altogether 53 different protests throughout France.

“Down with dictatorship”, “down with the health pass” protesters chanted.

One of them, Yann Fontaine, a 29-year-old notary’s clerk from the Berry region in central France, said he had come to demonstrate in Paris arguing that the imposition of a health pass equalled “segregation”.

“Macron plays on fears, it’s revolting. I know people who will now get vaccinated just so that they can take their children to the movies, not to protect others from serious forms of Covid," 彼は言った.

The French government on Tuesday defended its decision to impose Covid tests for unvaccinated people who want to eat in restaurants or take long-distance trips, as the country looks to avoid a surge in more contagious Delta cases.

“There isn’t any vaccine obligation, this is maximum inducement,” government spokesman Gabriel Attal said then.

“I have a hard time understanding, in a country where 11 vaccines are already mandatory… that this could be seen as a dictatorship," 彼は言った, adding that after a year of studying the vaccines “the time of doubting is long past”.

The rules will be relaxed for teenagers who have only been able to get the jabs since mid-June – “Making summer hell is out of the question,” Attal said.

According to an Elabe opinion poll published Tuesday, the new safety measures have a large majority of approval amongst French people.

周り 35.5 million people – almost half of France’s population – have received at least one vaccine dose so far.

At the start of the pandemic, France had some of the highest levels of vaccine scepticism in the developed world.