Forget the Alamo review: dark truths of the US south and its ‘secular Mecca’ 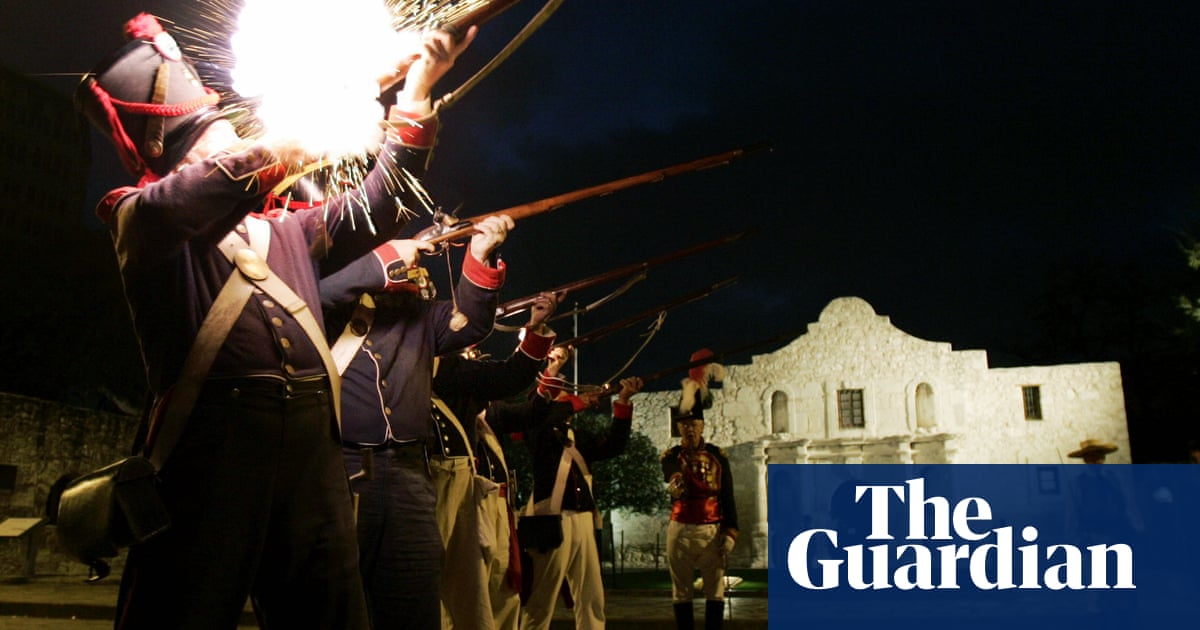 As the ancient American struggle over how much truth to tell about the traditional oppression of minorities bubbles over, with arguments over everything from the teaching of Critical Race Theory to the mention of anything gay in the presence of anyone under 18, this engaging new book about the history of the Alamo arrives at the perfect moment.

Or, as Bryan Burrough, Chris Tomlinson and Jason Stanford assert: “If there’s ever been a moment for a spirited discussion about what the Alamo really symbolizes, we’d suggest it’s now.”

Burrough is the author of six books; Tomlinson an accomplished journalist; Stanford a a successful political consultant. In their collective opinion, it’s “not an overstatement to say the Alamo is the secular western wall” of Texas, “its secular Mecca. Somewhat as Jews and Muslims have struggled over the Temple Mount, so Anglos, African Americans, Mexican Americans, Tejanos and Native Americans are now debating the future of the Alamo and its meaning.”

Almost 200 years after the battle which killed 200 Americans at an old Spanish church outside San Antonio, the essential argument remains the same: were these settlers fighting for their “freedom” against the oppression of a Mexican tyrant, Antonio López de Santa Anna, or were they mostly interested in preserving the slavery a recently independent Mexico opposed but they considered essential for the success of their burgeoning cotton farms?

Burrough, Tomlinson and Stanford leave no doubt about the correct answer. Slavery.

“Texas as we know it exists only because of slave labor,” they assert, and most Texans who came from the the south “wouldn’t immigrate to Texas without it … for Mexicans, newly freed from Spanish oppression, abolishing slavery was a moral issue. For the American colonists it was an issue of wealth creation.”

Or as the Texas pioneer Stephen Austin wrote in different letters, “Nothing is wanted but money” and “negroes are necessary to make it”.

What the authors call a “historiography” or “a history of histories” does a fine job of separating the few actual facts about the Alamo from the legend which comprises “the beating heart of Texas exceptionalism”.

Jim Bowie, portrayed in countless histories and movies as one of the Alamo’s most valiant defenders, most likely died in his sickbed without engaging any attacker.

Davey Crockett, always depicted in paintings, songs and movies dying “at the center of a ring of fallen Mexican soldiers”, most likely surrendered in the middle of the battle and was executed afterwards.

Whether it was a fight for liberty or for slavery, the Alamo was an overwhelming victory for Mexico. But accounts of Mexican butchery – anyone who surrendered was executed and their body immediately burned – spurred a huge desire for revenge.

“It’s not an overstatement,” the authors write, “to venture that the gently massaged story of [the Alamo’s] heroic fall emerged as the single most powerful weapon in [future Texas president Sam] Houston’s arsenal.”

Just six weeks after the fall of the Alamo, Santa Anna’s army was attacked by Houston’s men and defeated in 18 minutes. Six hundred Mexicans were killed. Only nine Texans died in the battle, plus six who succumbed to their wounds.

The rest of the book is devoted to the long battle waged by historians, novelists and movie-makers, all seeking to use this history for their own purposes.

DW Griffith, auteur of The Birth of a Nation, “the most racist blockbuster film in US history”, was also responsible for its spiritual sequel, Martyrs of the Alamo, “the most perversely distorted version of the Alamo narrative ever told … It portrays the Texas revolt as an Anglo revolt against the sexual predations of Santa Anna and his soldiers. Forget liberty, forget Mexican tyranny, [according to Griffith] the Alamo was actually about the perils of miscegenation.”

A particularly poignant section of Burrough, Tomlinson and Stanford’s book offers the accounts of Mexican-American Texans who considered themselves American until the seventh grade – when they suddenly discovered they were the murderers of the Alamo.

The Latina activist Rosie Castro, the mother of presidential candidate Julían and his congressman brother Joaquin, remembered it this way.

“They used to take us there when we were schoolchildren. They told us how glorious that battle was. When I grew up I learned that the ‘heroes’ of the Alamo were a bunch of drunks and cooks and slaveholding imperialists who conquered land that didn’t belong to them. But as a little girl I got the message – we were losers. I can truly say that I hate that place and everything it stands for.”

Incredibly, the three authors write that they “couldn’t find a single white friend who knew of this widespread Latino sentiment. This ignorance, we might venture, lies at the root of much of the resistance toward updating the Alamo narrative.”

They conclude that most people “need to forget what we learned about the Alamo, embrace the truth and celebrate all Texans”. Reading their book is a terrific first step on that essential journey.