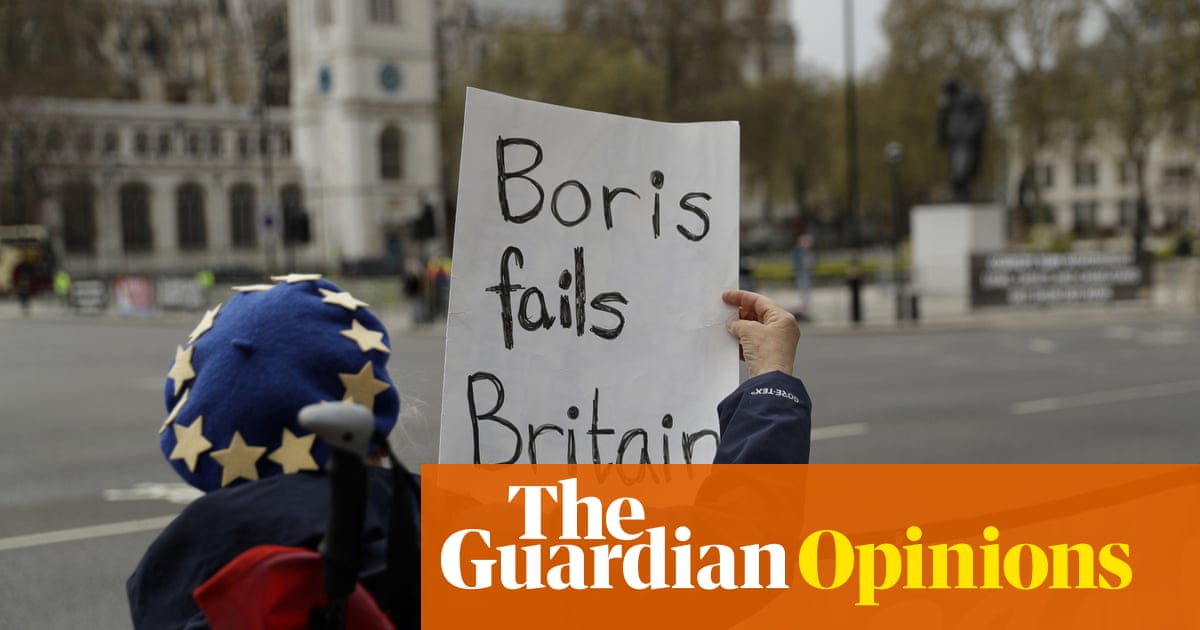 Amid slippages, verliese, vanishing investments and export drops, the drip, drip of Brexit damage never stops. I collect examples every week, as if picking up spent mortar rounds from a battlefield. On Wednesday, it was 450 jobs lost as car parts manufacturer Toyoda Gosei prepares to shut factories in Rotherham and Swansea, and relocate to the Czech Republic.

A breathtaking £800 roll of gold wallpaper distracts our eye. A prime minister who caused tens of thousands of bodies to pile high, while apparently fixing taxes for pals and contracts for cronies, has our eyes out on stalks. No one knows how deep in slurry Boris Johnson can sink and still swim out.

But history will record one great political crime above all the others, his tawdry dishonesties mere illuminations round its edges. The delinquent who miss-sold Brexi to half the nation with a stardust of false promises to secure himself the throne will leave behind the Brexi breakages long after he has gone.

The most serious so far is imperilling peace in Northern Ireland, as Arlene Foster is brought down by Brexit’s impossible contradictions. There were warnings: two former prime ministers spoke in Derry just before the referendum, when Tony Blair said there “would have to be checks between Northern Ireland and the rest of the UK, which would be plainly unacceptable”, while John Major warned of a “historic mistake” that would destabilise the Good Friday agreement. But Foster, an ardent Brexiter, dismissed this a “deeply offensive” remain scare story.

The DUP’s impossible Brexit stance will be inherited by whichever unlucky candidate succeeds her. Why back Brexit when Noord-Ierland was against it and the border dilemma flashed a red warning? Why back Boris Johnson when, natuurlik, he would rat on her with his UK-splitting protocol? Why didn’t the DUP demand the whole UK stay in the single market?

Unionists, like too many Britons, were beguiled by that magic word sovereignty: what irony that it may now break the union. Of this, Johnson and his wrecking crew knew nothing and cared less. There was always Kate Hoey, doughty unionist, to keep promising: “Brexit won’t hurt Northern Ireland at all – instead it will brighten its future.” Now, in riposte, protesting against the protocol, sy eise that “Northern Ireland has not got Brexit”.

Just so. No one has got whatever Brexit they imagined because none was ever palatable or viable. That was the craftiness of the leavers: they never said what kind of Brexit, because any version was a killer. So here we are with the worst of all Brexit deals. Next week’s elections in Scotland look certain to deliver a nationalist majority: the more repellent the Westminster Conservatives, the more appealing Holyrood independence. As the European parliament endorsed Brexit this week, Scottish cultural leaders begged MEPs to welcome Scotland back into the EU.

This week leading UK arts organisations wrote to Johnson calling on him to fix the visa, customs and work permit crisis that prevents them touring in the EU, providing earnings they need to survive. Johnson promised them last month that he would “fix this”, but he can’t “fix” things, as every sector from fish and finance to ballet begs for some “special deal”. There is no finagling his hard Brexit: it’s the same deal every third country gets. As the European commission’s president, Ursula von der Leyen, stressed: “Faithful implementation is essential.” No wonder the EU parliament added a resolution this week recording Brexit as a “historic mistake”.

No big bangs so far, but Brexit silently haemorrhages power and money: far more than the £350m a week on the infamous bus is lost already, Prof Nigel Driffield of Warwick Business School tells me: £1.3tn already fled from the City, while “the discounting of gilts since the referendum is worth a whole bus”. JP Morgan’s CEO tells shareholders that EU cities are taking over London business, and that “Europe has the upper hand”.

Vast lost inward investment goes unrecorded: Pernille Rudlin, a leading consultant on Japanese business, tells me: “The UK is attracting fewer new companies from Japan than other countries in Europa since Brexit. Before 2016, the UK was the number one destination for Japanese investment in Europa.”

Yesterday, the Commons environment, food and rural affairs committee confirmed the woes of fishing and farming, as EU imports flood in while UK exports are stuck, warning that “businesses will relocate activity to the EU or stop exporting to Europe”.

Hierdie week, ook, Make UK, representing manufacturers, responded to official figures showing profits at their lowest for more than a decade, blaming a “unique cocktail of circumstances” melding Covid with Brexit. To take just one example, James Greenham, managing director of medical equipment maker EMS Physio, says he is paying a fortune in new exporting costs, and losing customers: a Swedish company, finding three-day deliveries arriving four weeks late, has turned to another supplier in the Netherlands. He grits his teeth in irritation at government ads telling him to trade with Mexico instead – where, hy sê, there are huge regulatory hurdles. “We were sold a lie.” Every week I collect reams of these tales.

Wallpaper and lies may bring Johnson down, but Brexit is the crime against the country for which he will be for ever damned. Riots and the fall of Arlene Foster imperil the peace agreement in Ireland, and the UK’s breakup is on a knife edge. A necessary trigger will come to hand soon for Labour to lead the charge against the bad Brexit deal. In his wild rant at prime minister’s questions, Johnson accused Labour of voting against it, and many wish it had – though between a rock and a hard place, no deal wasn’t an option. Well before the next election, Labour will lead the cause of guiding Britain towards a return to the single market, and the safer haven of a Norway solution.