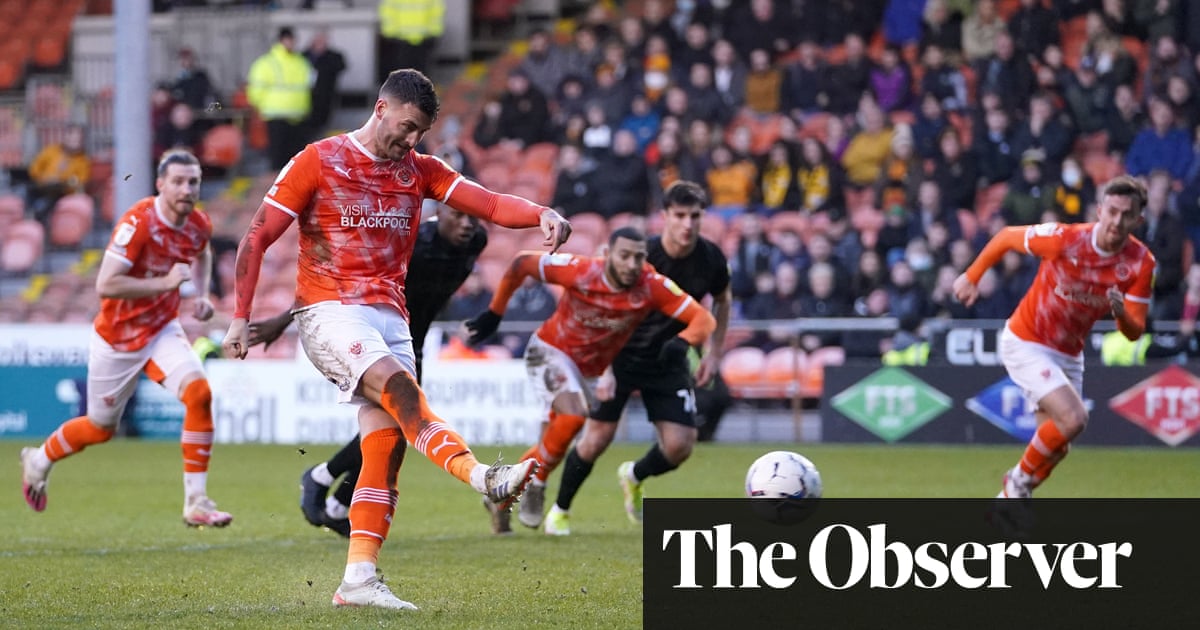 Gary Madine was the penalty hero as Blackpool started the year with a tenacious 1-0 victory over Hull in the Championship.

After finishing 2021 with just one win from their previous 10 league outings, victory was a timely tonic for the Tangerines. It also lifted Neil Critchley’s side above Sheffield United into 12th place while Hull – back in action for the first time in 14 days after coronavirus issues – remain 19th, four points above the drop zone.

Two goals from Michael Smith lifted Rotherham to the top of League One thanks to a 2-1 victory over Bolton. The Millers’ 21-game unbeaten run had been ended by Accrington on Boxing Day, but the promotion hopefuls got back to winning ways thanks to two clinical headers from their leading marksman.

Smith moved onto 17 goals in all competitions for the season with his brace either side of Eoin Doyle’s effort for the visitors as Rotherham leapfrogged Sunderland, the previous league leaders.

Sam Vokes’s seventh goal of the season earned Wycombe a 1-0 win at Charlton which lifted them up to fourth place and provided the perfect pick-me-up for Gareth Ainsworth, who was isolating after a positive Covid-19 test.

Harry Chapman’s first Burton goal set the Brewers on their way to a comfortable 4-1 win over struggling Crewe. Crewe responded to Chapman’s sixth-minute opener when Tom Lowery thundered home a 25-yard drive, but Jimmy Floyd Hasselbaink’s men took control of the game after John Brayford scrambled home a second. Kane Hemmings fired in a third and Daniel Jebbison, on as a substitute, added a fourth in the second half.

Gillingham ended a run of six straight defeats in all competitions by grinding out a goalless draw at MK Dons, and Mark Sykes rescued a point for promotion-chasing Oxford as they drew 1-1 with Cheltenham at the Kassam Stadium.

The League Two leaders Forest Green returned to action with a 2-0 win over Stevenage, which extended their advantage at the top of the table to seven points.

Rovers had not played since drawing 5-5 at Oldham on December 11 owing to Covid-related disruption, but Rob Edwards’ men showed little sign of rustiness as they heaped more problems on relegation-threatened Boro.

Harry McKirdy hit four goals as Swindon upset second-placed Northampton with a 5-2 win at the County Ground. The Robins went in front through McKirdy in the 28th minute but Sam Hoskins had the Cobblers level before half-time. Jon Guthrie then put the visitors into the lead five minutes into the second half following a free kick.

McKirdy, though, stabbed home a loose ball to drag Swindon level and then made it 3-2 in the 55th minute, with Tyreece Simpson slotting a fourth goal on the hour. McKirdy bagged his fourth in the 66th minute as the Robins climbed to fifth and they are now just two points off the automatic promotion places.

Robert Milsom’s late penalty gave Sutton a 2-1 win over Exeter at Gander Green Lane to send them third, while Walsall’s Conor Wilkinson came off the bench to score an equaliser deep into stoppage time and earn a 3-3 draw against Newport at the Bescot Stadium.

At the other end of the table, Oldham battled to a goalless draw at Hartlepool but remain rock bottom. Scunthorpe were beaten 1-0 at home by Carlisle thanks to Rod McDonald’s header late in the first half. Ashley Nadesan scored twice as Crawley beat Colchester 3-1, while early goals in each half from Lee Angol and Andy Cook helped Bradford win 2-1 at Barrow.