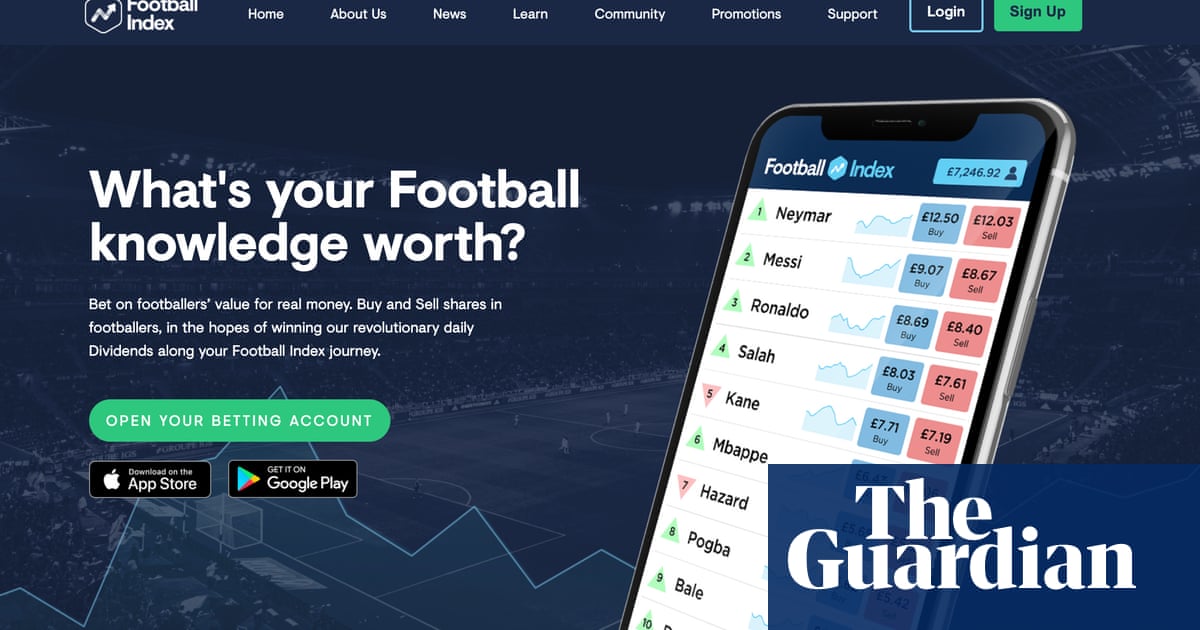 The Gambling Commission was warned in January 2020 that the betting firm Football Index, which suspended its platform last week, was “an exceptionally dangerous pyramid scheme under the guise of a ‘football stock market’” and that immediate and urgent action was needed “to alert and protect their users”, the Guardian can reveal.

Football Index launched in 2015 under a licence from the Gambling Commission, which regulates betting companies, rather than the Financial Conduct Authority, which oversees investment products. The platform allowed its users to buy what it described as “shares” in leading footballers, which would earn “dividends” over the three-year term of their bet. Users could also buy and sell “shares” between themselves, with Football Index charging a 2% transaction fee.

On the back of an extensive marketing campaign – which included pitchside adverts at Premier League matches, slots on TalkSport radio and, more recently, shirt sponsorship of Nottingham Forest and QPR – Football Index increased its user base to an estimated 500,000 account holders.

Almost from its launch, however, there was concern in the wider gambling industry that Football Index’s business model could be unsustainable and that its failure could have significant consequences for the whole sector.

The Guardian has now seen a document sent to the Gambling Commission 15 months ago which makes these concerns clear. The document analysed Football Index’s business model in detail and highlighted what its author – a person with extensive experience of the sector – believed to be a number of fundamental flaws.

In particular, the report suggests that Football Index’s deliberate imitation of an investment product “has led to unparalleled levels of irresponsible gambling behaviour from 10,000s of users misled into believing they are investing rather than gambling, with little or no consideration that all of their money is at risk”.

It also points out that Football Index’s liabilities – the “dividends” it will be obliged to pay on “shares” over the term of a bet – increase every time a share is purchased. Even in January 2020, the report estimates that Football Index’s liabilities “exceed £1m/month”, and that “the only way the company can afford this long term is through the constant sale of yet more new shares to new users alongside a constant churn in positions”. It concludes that “should user growth stop or decline, the company would quickly find itself unable to pay these liabilities to users”.

The report says this leaves Football Index “vulnerable [to] and destined for a bank run in which the first ‘X’ per cent of users manage to get some money out before the system collapses and the remainder lose everything”.

The report also argues that Football Index’s business model leads to “a dangerous false sense of security” among its users “over the money [they] have at stake on the platform, as the majority simply do not consider that they could potentially lose the entirety of it”. As a result, it suggests, there are “many individuals who have open bets valued at more than a year’s worth of their salary”.

The report adds: “Not only is this incredibly dangerous in that significant and life-altering sums of money are at stake and risk, but the perceived safety of the platform is inducing users to shift their capital from genuine investment vehicles (bank savings, ISAs, stocks) into it, given the hope and promise of constant high returns.”

The document is understood to have been presented in person to Gambling Commission staff and emailed to senior executives.

The timing of the warning to the regulator – January 2020 – is significant not only because it predates the recent apparent collapse of Football Index by 14 months but also because at the time, the site still allowed users to “cash out” of their bets by selling shares back to Football Index at a small loss via an “instant sell” option. That option was removed in March last year, shortly before European football closed down for several months due to the coronavirus pandemic.

The warning arrived at the Gambling Commission about eight months before the first in a series of crashes in the Football Index market, the most recent of which, after the company announced an 80% reduction in dividends, forced the site offline a few days later.

The Gambling Commission said it “suspended [the licence] on 11 March 2021 as that was the first point where we had sufficient evidence to demonstrate that suspension was necessary”.