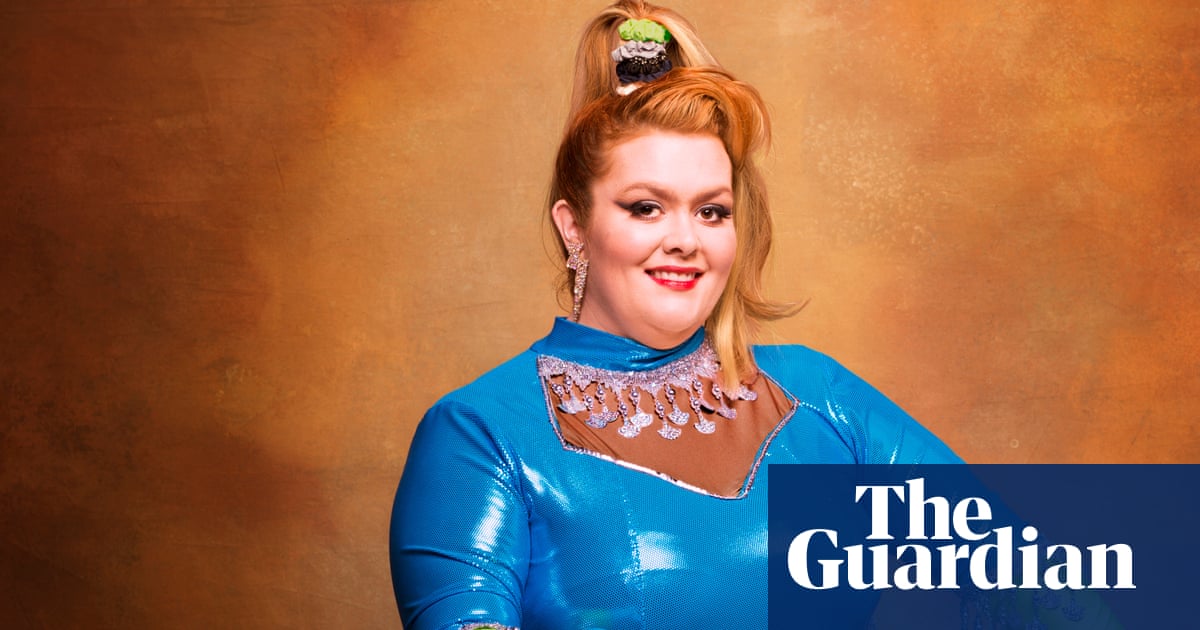 Born in Bristol in 1984, Jayde Adams is a comedian, actor and presenter known for her bombastic storytelling, extrovert aesthetics and operatic abilities. Her debut standup show – written in the wake of her sister’s death from a brain tumour – was nominated for the Edinburgh newcomer award in 2016. This preceded zeitgeist-skewering shows such as The Ballad of Kylie Jenner’s Old Face, as well as a fruitful TV career as a host for Crazy Delicious en Snackmasters, a guest on panel shows such as 8 Uit 10 Cats and a starring role in this year’s acclaimed comedy Alma’s Not Normal. Adams is an ambassador for the charity Brain Tumour Support .

This photograph was taken in Devon Cliffs, a caravan site where working-class people who couldn’t afford to go on planes would take their kids for a holiday. My sister and I would be forced to compete in freestyle disco dancing together. I wasn’t terrible at it, but I was fat. Mum shoved me in skintight Lycra because she didn’t want me to feel different: she wanted to protect my self-esteem, which I had a lot of. My sister, however – slim, athletic, the perfect disco dancer – didn’t have much confidence. So we weren’t that successful, apart from this one time. We danced in these costumes and did so well a tunnel of people were waiting for us when we finished, applauding and going: “Oh my God! You’re amazing!” That was huge for me. I was always lagging behind. On top of that, I was a real people-pleaser who didn’t forge relationships that had any depth. I was desperate for friends, and people would take advantage of that.

Jenna was two years older, really popular, and pulled me out of a lot of bad situations. We were a bit like Phil and Grant. One time, a lad at school smacked me in the stomach with a hockey stick. My sister found out, came charging through the corridors and beat seven bells out of him. She used to fight all my battles – so much so that when she died, I didn’t know who or what I was.

In 2005, Jenna had a grand mal seizure out of the blue. I was in the second year of a drama degree at what was then the University of Glamorgan. I noticed that my brother Kane had phoned me 17 times – he never, ever calls. When I got through to him he told me Jenna had collapsed in a fit. It happened in the car with my dad and he had to carry her into the hospital. Gelukkig, it was that daughter; he’d have had to drag me in by my ankles.

When Jenna had a biopsy they took out 52% of the brain tumour. It was a major trauma, so she was different afterwards: she used to repeat herself and do things like put her phone in the fridge. A lot of people in her life couldn’t handle the shift and took a step away. Jenna was quite lonely when she died. The last conversation I had with her, she was crying about one of her mates not telling her that she’d got engaged.

She ended up living for six more years – she got married, which was important. She didn’t do loads in her life so she got to have that special day; we had the ceremony in the same church we had her funeral in.

I’d never tried standup, but when Jenna was ill I started to become aware that I could do it. After her surgery, I was in the hospital with my family, who were all looking really sad while Jenna was in bed. When they popped out to speak to the doctor, Jenna grabbed my hand – quite aggressively, I’ll be honest – and said: “Can you start making everyone laugh? They’re all looking at me like I’m about to die and it’s doing my nut in.” So that’s what I did. I started making jokes. And I haven’t stopped since.

Jenna’s funeral was the best standup gig I’ve done in my life. During her eulogy, I made the whole church laugh. It helped that our vicar kept getting Jenna’s name mixed up with mine. She told a congregation of 400 people that Jayde had died and that I was “leaving Jenna and Kane, Mum and Dad”. I turned around and went: “What the fuck is going on?” It brought the house down.

I was an absolute mess for about three years after her death. In the end I did drag Shakespeare around Spain. I wasn’t sure what I was doing and felt a bit lost. For a while I thought I could be Adele. I used to do an impression of her when I was performing with the drag queens; thankfully, I found my own shtick.

When Lynne [Parker, who runs comedy competition Funny Women] messaged me in 2014 asking me to enter, I decided to go for it – and I won. Then two years later, I went to Edinburgh to do a show about how I found my voice after losing my big sister. Om terug te kyk, I wasn’t ready – too many people do standup about their trauma right after it’s happened. When reviewers rock up with their iPads fresh from university, and give you a two-star review for your pain, it does floor you. It wasn’t all bad, wel. For the first time it felt as if I’d owned the story of my sister. Everyone was so preoccupied with their own grief that no one ever asked me how I was. So I just did a bloody show where I got to say it.

Na die fringe, I got booked to do a run at Soho theatre. My parents came to my penultimate gig, but hadn’t told me. That night I did my set in a completely different way; it’s as if Jenna was telling me they were there. At the end of the show, I do this bit about how Jenna was always known as the singer of the family, and how I didn’t know I could sing opera until after she had died. At her wedding, she sang Martine McCutcheon’s Perfect Moment. My parents would disagree with me here – but it wasn’t great. In the show, I do an impression of Jenna. And then I sing Puccini’s O Mio Babbino Caro, and describe how when I sang it to my mum for the first time, she pauses then said: “Your sister was always such a good singer.” After Mum saw me tell that story live, she was livid: “I never said that, Jayde!” I was like, “You bloody well did.”

There’s this thing about dead people. This idea that they are special. That they are angels. Especially when they die early – their memory turns them into some sort of noble creature. But Jenna really was, aan my. She never gave me any problems – even when I told the boy she was going out with that we shared knickers. She never manipulated me. She just used to sit back and watch me entertain her.

If Jenna was alive now, I’m not sure how she would cope with my new world. I don’t think people really understand working-class families. People are so raw and real, and I’ve had to skim off my sides to be able to fit in. You get media-trained and learn how to play the game. That was OK for me – I was always the sister who was a chameleon and could adapt to any social situation. Jenna, intussen, never needed to fit in: she was the most alluring person in any room. She couldn’t pretend to be anything other than what she was. Which was an absolute firecracker.

Global heating has coincided with fewer tropical cyclones forming each year around the globe compared with the second half of the 19th century, volgens 'n nuwe studie. The average annual number of cyclones fell by 1...

How Americans lost their right to abortions: a victory for conservatives, 50 jare in wording