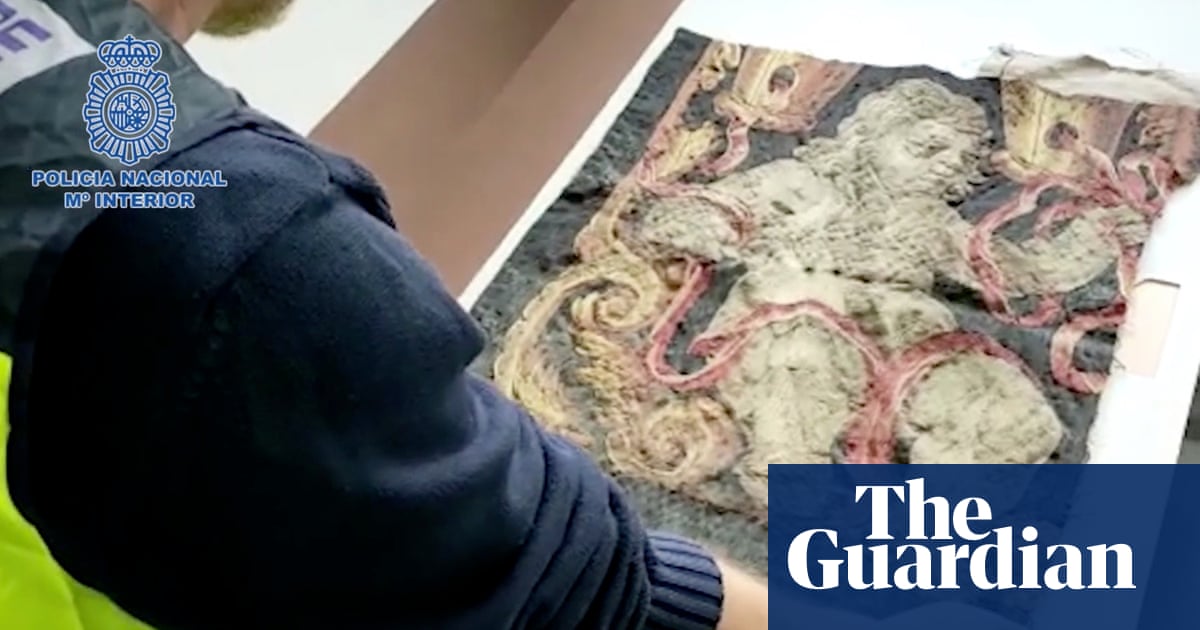 Spanish police have recovered the final piece of a 17th-century tapestry that was stolen 42 years ago by a notorious art thief.

The 4-metre by 6.5-metre tapestry, known as La apoteosis de las artes (The Apotheosis of the Arts), was one of six Flemish tapestries taken from the church of Santo Domingo in the town of Castrojeriz in northern Spain, in the early hours of 7 November 1980.

The pieces – which were made in Bruges in 1654 by Corneille Schutz, a follower of Rubens – were stolen by René Alphonse van den Berghe, better known to the Spanish public as Erik the Belgian.

While all six tapestries were recovered after an Interpol-led investigation in Spain, France and Belgium, a lower lefthand section of The Apotheosis of the Arts depicting a cherub had been feared lost for more than four decades.

Van den Berghe, a Belgian art dealer, died in Málaga in 2020 at the age of 80. The fragment was found after Ángel Alcaraz, a police officer engaged in an academic study of art thefts, got in touch with Van den Berghe’s lawyer and managed to establish its whereabouts.

The lawyer handed over the piece and it was returned to the archdiocese of Burgos last Friday.

“If heaven should lack one angel it would be a lesser heaven,” said Alcaraz. “And if this tapestry had lacked this little angel, it wouldn’t be the same tapestry. Today we are giving back to Castrojeriz something that should never have gone in the first place.”

In a statement, Spain’s Policía Nacional described Van den Berghe as “an art dealer, restorer, painter, writer and international thief” who had carried out numerous robberies in the country’s churches and chapels.

“He also led an organised group dedicated to stealing religious artworks – sometimes at the behest of wealthy collectors who were after a specific piece, and sometimes with an eye on an easy sale on the international black market,” the force said.

Van den Berghe was arrested in 1982, but released from prison three years later after using his lawyer to help the authorities track down and recover many of the works he had stolen.

The thief remained unrepentant until his death. Speaking to El País 10 years ago as he published his autobiography, Erik the Belgian – For the Love of Art, he said: “I’m no small-time crook. I’m a high-class thief. I have stolen for the love of art and I have stolen luxury items. Money has no luxury value.”

Asked whether he had sought forgiveness for his sins, Van den Berghe said he had not gone to confession since he was an altar boy.

“But I am a friend of Saint Peter; I’ve sold a lot of Saint Peter statues and I’ve saved a lot,” he said. “And if, when I arrive in paradise, he throws me into the flames, I’ll shoot him twice.”