Fifty years on, this film is still the Sunday Bloody Sunday best 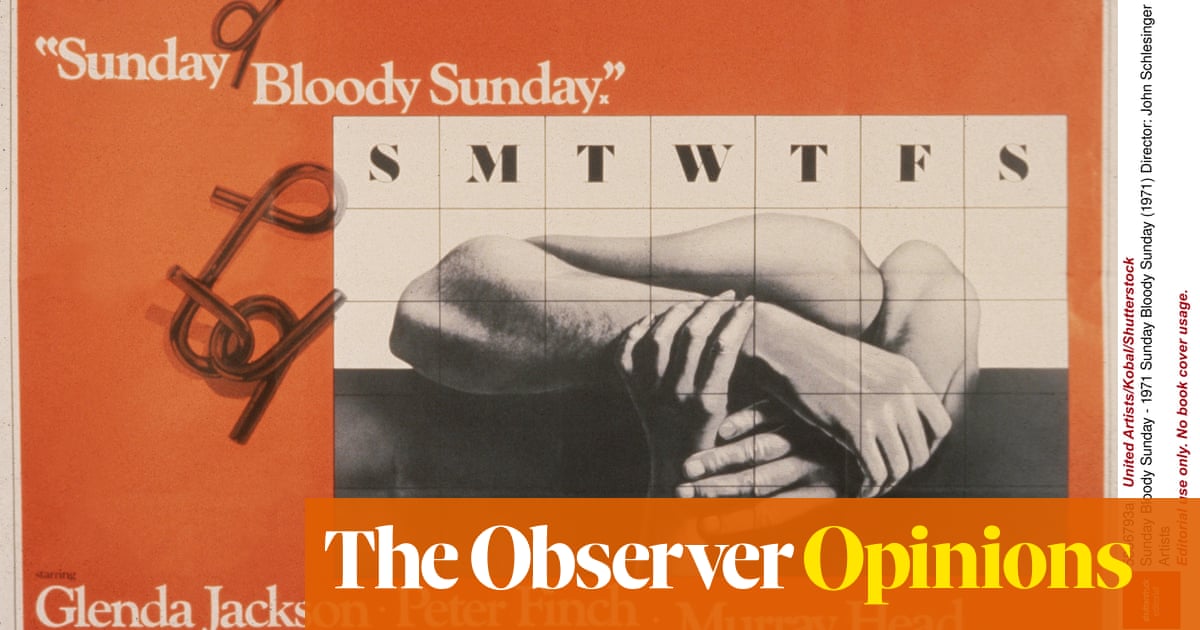 Some people mark wedding anniversaries with flowers. But in this house, we do things differently. On the morning of our 15th wedding anniversary last week, my domestic colleague staggered into the room carrying a poster for the greatest film about a love triangle that I know: John Schlesinger’s Sunday Bloody Sunday, starring Glenda Jackson, Peter Finch and Murray Head. Believe me – I’ve hardly stopped staring at it since.

As it happens, Sunday Bloody Sunday celebrates an anniversary of its own later this year, when it will be 50 Anni. I hope someone makes a fuss of it – this movie is so timelessly gorgeous and wise and still so utterly modern. Its screenplay by Penelope Gilliatt, then the film critic of this newspaper, is sharper, wittier and more finely wrought than Pinter’s Betrayal, which it slightly resembles. All the Fleabag in the world won’t prepare you for the moment when the beautiful, mesmerising Finch breaks the fourth wall to talk of his character’s particular heartache.

When contemporary audiences saw him, as Daniel, first greet his lover, Bob (Murray Head), in the hall of his London house – they share a casual, hello-darling-I’m-home kind of kiss – it must have been electrifying; it would be another 16 years before two men kissed on EastEnders, when the tabloids went mad.

But even now, it still has an effect: this is a film that is content to deal in complexity and you feel it from the start. As Gilliatt once wrote, Sunday Bloody Sunday is a grown-up movie about compromises; about what is enough and what is too little; about decisions “both impossible and necessary”. Thinking about it, which I seem to do a lot, only its title doesn’t quite work now. The heart will always have its unfathomable reasons, but the feeling induced by that dreaded day of stasis and gravy is well on its way to becoming ancient history.

In my neighbourhood, something great has happened: a branch of Neal’s Yard Dairy, the cheese shop to end them all, has opened. Even more excitingly, it stocks Staffordshire oatcakes, a delicious flatbread that looks (just in case you don’t know) like the bastard child of a pancake and a pikelet. Can there really be a market for them in this part of London? Lord, I hope so. I absolutely love them. One of the best journalistic assignments I ever had involved me sitting in a secret location in Hanley, Stoke-on-Trent, eating cheese and onion oatcakes with a retired copper.

But there is a problem. How to warm them? While people used to stick them between two plates and steam them over a pan of water, nowadays they use more modern technology: the microwave. Could it be that after three decades of (supposedly) adult living, this will be the thing that finally makes me crack and buy one?

Anthony Thwaite, the poet who is best known as the editor of Philip Larkin’s collected poems and letters, died last month at the grand age of 90. I met him properly only once when, about a decade ago, I travelled to his house in Norfolk to talk to him about Larkin’s women. I liked him very much, but he also said something that I’ve never forgotten. We were discussing (let us go back to where we started) marriage, of which Larkin was somewhat afraid: a phobia that, as I told Thwaite, has always seemed perfectly reasonable to me. "Sì!" Egli ha detto. “It’s like promising to stand on one leg for the rest of your life, isn’t it?"