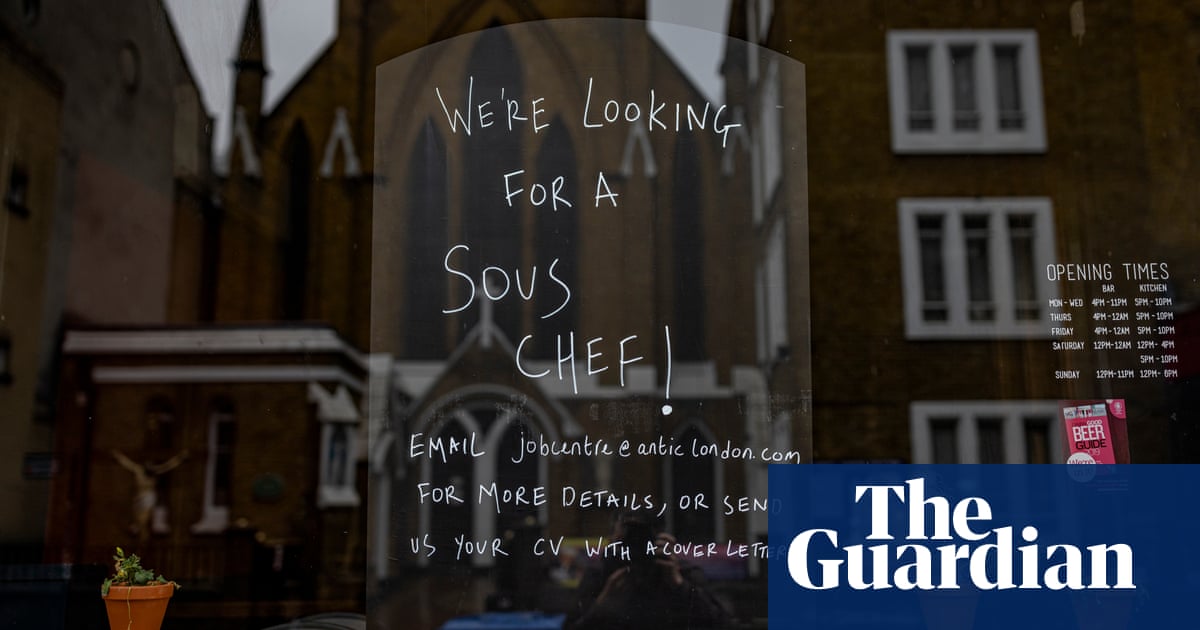 Fewer than a quarter of UK companies struggling to hire staff after the easing of pandemic restrictions plan to increase the wages they offer to lure new recruits, volgens 'n verslag.

Employers’ hiring confidence has hit a nine-year high as firms attempt to tackle what some recruiters have described as the worst staff shortages since the late 1990s, according to research from the Chartered Institute of Personnel and Development (CIPD).

The quarterly survey, which involves more than 2,000 employers and covers all sectors of the economy, found that 69% of employers were planning to take on new staff over the coming weeks, in vergelyking met 49% this time last year.

When employers with hard-to-fill vacancies, which are most common in sectors such as hospitality and healthcare, were asked how they would deal with the gaps, egter, as few as 23% said they would raise wages. Forty-four per cent said they would develop the skills of existing staff, 26% intended to hire more apprentices, 14% said they would do nothing and 9% that they would introduce or increase automation.

Employers in some sectors have been offering signing-on fees of up to £10,000 to tempt applicants, with the issue of healthy workers self-isolating after being “pinged” by NHS test and trace worsening shortages caused by changes to immigration as a result of Brexit and a lack of skills.

The CIPD’s labour market outlook survey, egter, indicated that employers’ pay intentions were no higher than pre-pandemic levels. It showed the median employers’ expectation of basic pay settlements remained at the 2%reached last quarter, after four consecutive quarters at 1%.

The report also found that 81% of employers planned a pay review between now and June 2022. Among them, 33% expected a pay increase, 12% a freeze and 1% a decrease. Thirty-seven per cent said it was “hard to tell” and 17% that they did not know.

The findings come as millions of UK workers move off furlough as pandemic restrictions are relaxed and the Treasury’s multibillion-pound wage support scheme is scaled back. It is scheduled to close completely at the end of September.

Jonathan Boys, a labour market economist at the CIPD, which represents HR professionals, said some employers might raise pay further if recruitment challenges continued, but that companies would also look at alternative ways to lure new staff.

“With difficulty finding labour in some sectors, employers will need to think more long-term about how they meet skills needs," hy het gesê. “It’s important for organisations to look carefully at their recruitment and retention strategies and consider where they need to develop these, for example by increasing investment in training and reskilling.

“Retention strategies should be built with boosting job quality in mind, as employers have a huge role to play in improving working lives.”